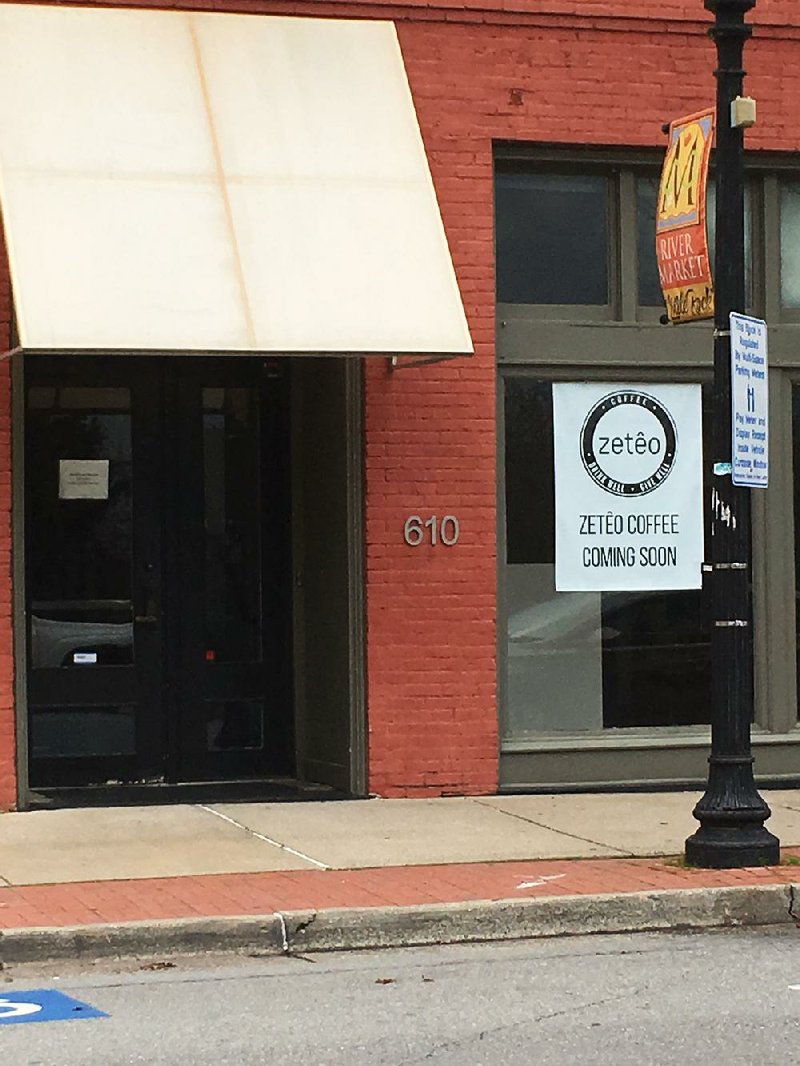 March 16 is now the pretty firm target for the opening of Argentine restaurant Buenos Aires Grill and Cafe, 614 President Clinton Ave., Little Rock, the final resting place of Juanita's. Co-owner Flo Bruzatori-Mullins says they'll be doing an invitation-only soft opening at the top of the week. The family-run first-floor restaurant will serve "family recipes crafted with passion," including "asado, empanadas, Graciela's famous chimichurri and more," according to the restaurant's Facebook page. Hours will be 11 a.m.-9 p.m., Tuesday-Saturday; eventually they plan also to be open 10:30 a.m.-2 p.m. for Sunday brunch. The phone number: (501) 904-2133.

And speaking of the 600 block of President Clinton Avenue, Conway's Zeteo Coffee set up a pop-up mobile espresso bar Sunday at its new-River-Market-location-to-be, 610 President Clinton Ave., for the caffeination of marathon runners and onlookers. Some reconstruction on the front of the building has set back an original estimated February opening date; the new target is now late March/early April, says Tim Harrington, manager of the store at 911 W. Oak St., Conway. The 1,500-square-foot coffee shop occupies a portion of the building that formerly housed the Clinton Museum Store (the rest of the building houses the corporate offices of Rock Dental Brands and affiliated company AXPM). Harrington says they'll pour exclusively brews from Onyx Coffee Lab in Springdale and also vend Onyx's bagged retail beans and grinds. Hours are still in flux, but he expects they'll offer breakfast and lunch with a seasonal menu and gluten-free options, and also a seasonal menu, beer and wine (a notice on the window says they've applied for a permit for native beers). A portion of Zeteo's profits go to Living Water International, a nonprofit whose mission is to provide clean water to places around the world. The number for the Conway cafe: (501) 358-6285.

And speaking of Conway-based coffee shops planning downtown Little Rock openings, March 24 is now the new target for the opening of Conway-based Blue Sail Coffee Roasters' 1,222-square-foot coffee shop on the first floor of Phase 1 of the Little Rock Technology Park project, 417 Main St. Hours are tentatively 7 a.m.-7 p.m. weekdays with possible eventual Saturday hours. Blue Sail has two Conway outlets at 1028 Front St. and in the Donaghey Center, 250 Donaghey Ave., next to the University of Central Arkansas. Check out the website, bluesail.coffee.

Mr. Hui's Restaurant is up and running in the the Pleasant Ridge Town Center, 11525 Cantrell Road, Little Rock, and is, according to signs posted around the shopping center, marking its grand opening. It's connected to, and the the menu is similar to, the Mr. Chen's combination restaurant-Asian grocery, on Little Rock's South University Avenue and Mr. Cheng's, just a restaurant, on North Little Rock's East McCain Boulevard. Hours, according to the sign on the door, are 10:30 a.m.-9 p.m. daily; according to the to-go menu, it stays open until 9:30 p.m. on Friday and Saturday. The phone number is (501) 478-6666.

We recently spotted Delta Biscuit Co. as supposedly a pending breakfast/brunch restaurant, headed toward opening, possibly this spring, somewhere in the vicinity of Baptist Health Drive in Little Rock. Owner Hayne Begley, however, tells us he's actually planning to open sometime in early fall -- as a food truck. "I've been looking at some locations in Little Rock, but I decided going the food-truck route gives us more accessibility to Little Rock, and it's a fairly limited menu, focusing on biscuits," he explains. That includes some biscuit-based sandwiches and concoctions including a biscuit Benedict, a chicken biscuit (fried chicken breast on a biscuit with Dijon mustard and honey) and what he calls "campfire biscuits" (which he describes as a sort of deep-fried, hush puppy-like, French-toast kind of biscuit). Begley did a pop-up event last week at Honey Pies in west Little Rock, and is planning other such events as a way of getting some exposure, including an April cooking class at Eggshells Kitchen Co. in Little Rock's Heights. A website, deltabiscuits.com, is under construction; you can keep in touch with Begley via email -- deltabiscuitcompany@gmail.com -- or via various forms of social media, including Facebook, Twitter and Instagram.

The North Little Rock Planning Commission, at its meeting Tuesday, will be examining a site plan review for a restaurant at 403 E. Broadway, which is the address of a Burger King that, we're told, is to be razed and rebuilt.

Feltner's Whatta Burger, 1410 N. Arkansas Ave., Russellville, will donate a portion of all its Friday-Sunday french-fry sales to Alzheimer's Arkansas, and co-owner Missy Ellis will be selling fresh-baked cookies on a pay-what-you-can-basis in the store and donating those proceeds to the nonprofit as well. Ellis is the niece of restaurant founder and namesake, paterfamilias Homer Feltner. Restaurant hours are 10:30 a.m.-9 p.m. Sunday-Thursday, 10:30-10 p.m. Friday-Saturday, and the phone number is (479) 968-1410.

And one of our eagle-eyed Spa City correspondents noticed in a recent edition of the Hot Springs Sentinel-Record that an operation called Rustic Development has filed a permit application to spend $300,000 for a "remodel for restaurant and meeting hall" for a long-vacant building at 812 Central Ave., Hot Springs.