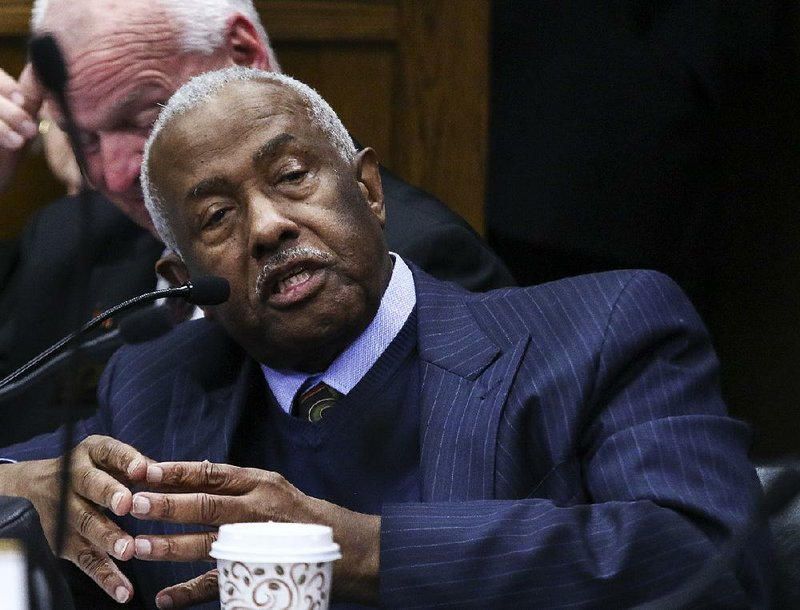 Rep. John Walker, D-Little Rock, asks a question during debate on a measure called “The Arkansas Parental Empowerment for Education Choice Act of 2017.”

Parents would be given broad authority to spend state education funds as they see fit on their children under a proposal approved by the House Education Committee on Thursday.

House Bill 1222, by Rep. Jim Dotson, R-Bentonville, would establish "education savings accounts" for students. Those accounts would be managed by nonprofit organizations. Under HB1222, individual and corporate taxpayers could effectively choose to divert their income tax dollars to a nonprofit organization responsible for administering the education account program. A taxpayer would donate to the nonprofit, then receive a tax credit from the state.

"The purpose of this bill is to create an opportunity for students to have access to educational services that specifically meet that individual student's unique needs," Dotson said.

Under the bill, parents would be able to spend $6,712.50 per child per year. That's the same amount that public schools receive per child from the state.

The bill was approved by a 12-4 vote, with four lawmakers not voting. Eleven votes are needed to pass a bill out of the committee. The measure now advances to the House for further consideration.

After the vote, Gov. Asa Hutchinson expressed unease with the cost of the bill.

"I've always been a strong advocate for choice of parents in the educational environment, but I do have to watch over the state budget, and this would have a negative impact of approximately $7 million," the governor said in a statement. "For that reason, I've expressed my reservations on the bill. In addition, my preference would be that if we used limited state resources for choice, it should first go to those children who are caught in an academically-failed school and are looking for a way out and low-income students."

Because the fund is allowed to grow by 10 percent per year, the cost of the bill could grow over time up to $11.5 million in fiscal 2025.

During the committee meeting, those opposed to the bill said it was expanding access to an unaccountable system that would drain state resources.

Dale Query, executive director of the Arkansas Rural Education Association, said private schools should be held to the same standard as public schools, which are taken over by the state when they fail.

"All entities receiving state money [should be] held to the same accountability principals as everybody else," he said. "If we send those kids to those private schools and if we look at their achievement levels and they're doing very well, then, by golly, in public schools we want to do the same thing."

While the bill gives poor students a preference to qualify for the funds, critics said those students may not have alternative educational options or parents with the resources or time to transport students hours away.

But supporters of the legislation said parents did not need standardized tests or academic distress designations to ensure that their children are being appropriately educated.

Education savings accounts allow parents "to customize the education and modify the education if necessary," said Patrick Wolf, a University of Arkansas professor and 21st century chair in school choice.

Under the bill, a parent would have the ability to pick and choose services to provide for a child's specific needs with a spending account.

"That's sort of the accountability because, basically, we all know as parents that when our students don't succeed, that's a problem for us, so we're going to take action to make sure that education providers are delivering for our kids," Wolf said.

Advocates say Nevada has the most expansive law, and the Nevada Supreme Court ruled that the state could not pay for the accounts using money intended for public schools.