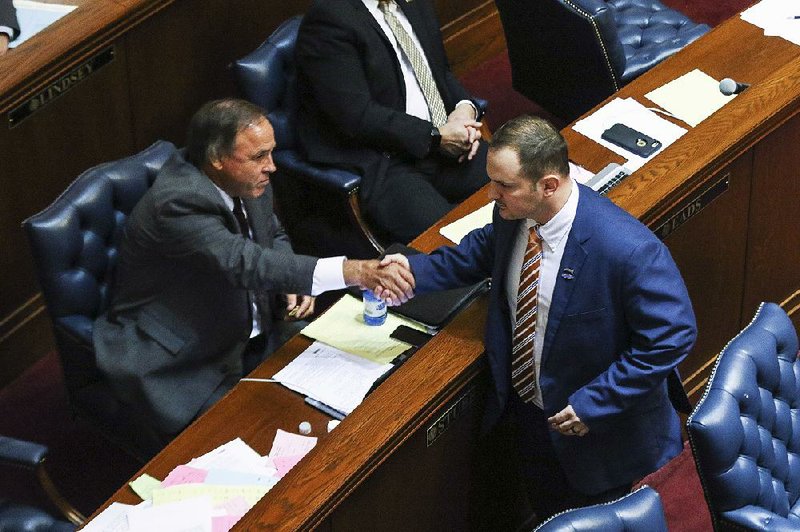 Sen. Trent Garner, (right) R-El Dorado, is congratulated by Sen. Gary Stubblefield, R-Branch, after Garner’s gun bill was passed in the Senate. “This bill has gone through a rocky history,” Garner said.

Legislation that entered the Senate last month as a guns-on-campus bill left the chamber Thursday as a proposal to allow concealed carry of weapons at colleges, bars, churches and most public buildings, including the state Capitol.

In a series of three votes, senators voted to pull House Bill 1249 out of committee, where it had been stalled for weeks; add an amendment to roll back a range of existing concealed-carry prohibitions; and finally to approve the bill. HB1249 returns to the House for approval of Senate amendments.

The latest amendment to the bill was touted as an agreement between the bill's sponsors, Gov. Asa Hutchinson and the National Rifle Association. Still, some Republicans contended that it did not go far enough to appease voters in a strongly pro-gun state.

In its current form, HB1249 would allow anyone with a concealed-carry permit to take up to eight hours of extra active-shooter training before taking weapons onto public college campuses and into many other public facilities, as well as bars, churches and private colleges that do not post notices to otherwise ban weapons.

It would retain existing prohibitions against taking a gun into a school, prison or courthouse.

The vote in favor of final passage of the HB1249 was 18-9, with one Democrat joining the Republicans to pass the bill.

"This bill has gone through a rocky history, to say the least," said its sponsor in the upper chamber, Sen. Trent Garner, R-El Dorado.

Despite objections from college officials, gun-control advocates and some Democrats, HB1249 passed through the House in quick order in early February. Once in the Senate's hands, the bill became subject to a tug of war between Republicans who disagreed on how far to go in rolling back restrictions on concealed carry of weapons.

After reaching a stalemate in the chamber late last month, it was re-referred to the Senate Judiciary Committee at Garner's request. In the committee, repeated attempts in recent weeks to tack on more amendments fell short by a single vote.

At one point, because of Senate changes, HB1249 would have required college staff members to take 16 hours of training before they could take their guns to school. In its later iteration before Thursday's votes, it proposed requiring some training for anyone who was a permit-holder over age 25 to be able to carry a weapon on campus.

Other ideas pitched by Senate lawmakers: allow anyone with training and a license to carry a weapon on campus, or end all restrictions and require only the receipt of a license.

The legislation's chief sponsor, Rep. Charlie Collins, R-Fayetteville, said the bill filed in the House on Jan. 23 was the result of failed attempts to expand concealed carry onto college campuses in 2011, 2013 and 2015.

In 2013, Collins got legislation through to remove the blanket prohibition, but that law allowed the boards of public higher-education institutions to adopt policies banning guns on campus. Each campus then adopted such policies.

Included in the original bill was a hodgepodge of exemptions that would have continued gun prohibitions at two Little Rock campuses, as well campus dorms, day care centers and at special events -- all considerations sought by collegiate officials, Collins said.

The amendment adopted Thursday does away with all of those prohibitions, except for dorm rooms and school grievance hearings. But Collins said later that he was "ecstatic" that the scope of the bill was expanded beyond just colleges.

During House committee meetings, administrators from major university and community college systems asked lawmakers to continue the status quo, as did the chief of the University of Arkansas Police Department.

But when the bill was at the Senate end of the Capitol, officials made few public statements in front of committee members. A spokesman with the University of Arkansas Police Department said Thursday that he wouldn't have any additional comment beyond the chief's testimony.

According to Rep. Greg Leding, a Democrat whose district includes the University of Arkansas, Fayetteville campus, the vast majority of constituents' calls that he received were against HB1249.

"It's awful," Leding said of the newest Senate version. "I can't believe that we put demands of the gun lobby ahead of the safety of students, faculty, small children."

In the Senate, the most vocal opposition came from Sen. Linda Collins-Smith, R-Pocahontas, who offered a competing proposal she called the "True Campus Carry Act."

Standing at the well of the Senate to speak against HB1249, Collins-Smith rebuked Garner's earlier thankfulness toward her input and said Rep. Collins' original bill had been "prostituted." (She is unrelated to Rep. Collins.)

"It's my bill, and I'm telling you that's not what happened at all," Rep. Collins said when asked about the senator's comments. "Anyone that was interested in working with me on the bill was invited to do that."

He said he hoped the bill would allow Arkansas to become a model for other states seeking to expand gun-carry rights.

Another Republican, Sen. Jimmy Hickey, R-Texarkana, told his colleagues that they would risk political fallback to oppose the NRA-supported measure, but that he did so after thinking about his only son in college.

"Never in my wildest dreams did I think we'd be allowing armed students to sit in classrooms or locker rooms," Hickey said.

To extract the bill from committee, it took two Little Rock Democrats -- Sens. Joyce Elliott and Linda Chesterfield -- to get the votes needed in the chamber, which was missing many members. They ultimately voted against the bill, but, by that time, more Republicans had showed up.

Elliott said it was "courtesy" to allow the bill to have a fair hearing.

If approved by the House and governor, HB1249 would become effective Sept. 1. 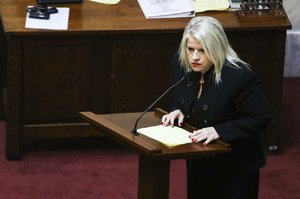 Photo by Mitchell PE Masilun
Sen. Linda Collins-Smith, R-Pocahontas, speaks Thursday on the floor of the Senate against HB1249, complaining that the bill, which would allow the carrying of guns in many public buildings, was too watered down.