Foley passes his award to a colleague 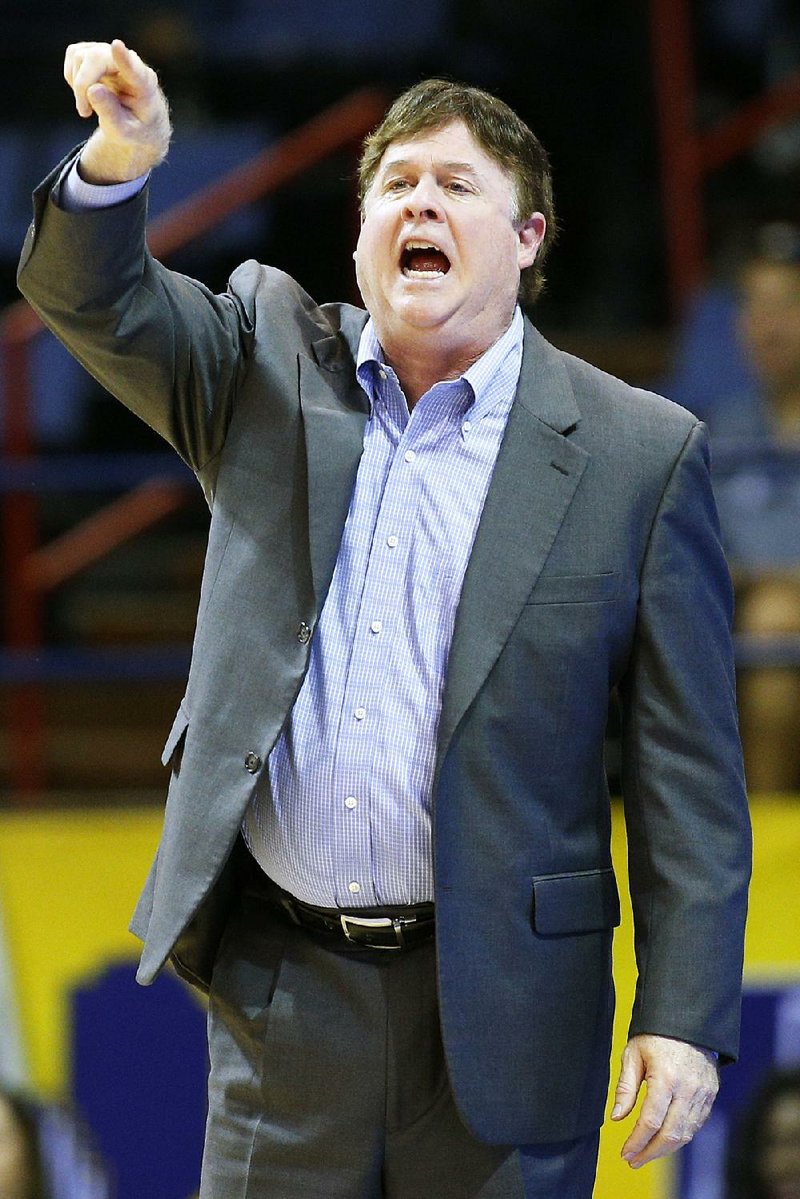 University of Arkansas at Little Rock Coach Joe Foley was named this week the Sun Belt Conference women's basketball coach of the year for the fourth time.

But Foley decided to hand the award instead to Appalachian State Coach Angel Elderkin before the Trojans defeated the Mountaineers 69-53 in the quarterfinals of the conference tournament Thursday at Lakefront Arena in New Orleans.

Elderkin was diagnosed with endometrial cancer in May. She coached the Mountaineers this season to a 12-19 record while undergoing radiation and chemotherapy, finishing her final treatment in November.

Foley got a little emotional discussing the moment at his postgame news conference Thursday.

"It was just right then," he said of his spontaneous reaction to give Elderkin the trophy before tipoff. "I got to thinking she's had more influence on kids that I ever had with what she's done this year. She deserves it."

The Sun Belt Conference participated in "Suits and Sneakers" in late January in support of Elderkin, whose mother died of cancer. She has been announced as the co-recipient of the U.S. Basketball Writers Association's Pat Summitt Most Courageous Award, along with ESPN's Holly Rowe, and she will be honored at this year's women's Final Four in Dallas.

She said Foley's act was "an unbelievable gesture from somebody that I have so much respect for."

"I was in shock," she said in her postgame news conference as her eyes welled up with tears. "My assistants were like, 'Get it together.'

"That's the support I've been getting from our [league] coaches. This league has some exceptional coaches. He's the leader. He's been here the longest, and he shows us the way. I just think it was unbelievable what he did for me."

The Michigan basketball team was in its regular uniforms Friday for the Wolverines' Big Ten Tournament quarterfinal victory over Purdue.

The Wolverines played in practice jerseys in the first game of the tournament Thursday, a 75-55 victory over Illinois, after a Wednesday plane accident trapped their cargo at Willow Run Airport in Ypsilanti, Mich.

Michigan Coach John Beilein had said after Thursday's game that he didn't know whether the team would be able to get its bags because of the investigation.

All is well as the eighth-seeded Wolverines got their navy blue gear and pulled off a 74-70 victory in overtime over the top-seeded Boilermakers.

For about an hour early Friday morning, social media was abuzz with an apparent goodbye to New England from Patriots backup quarterback Jimmy Garoppolo.

"So grateful for my time in New England. Peace out Boston," the message on Garoppolo's verified Instagram account read.

Did Garoppolo's post mean he had been traded? Apparently not.

According to multiple reports, people close to Garoppolo say he's not on Instagram at 4 a.m., and the post appeared to be a hoax.

Garoppolo has been the subject of a great deal of trade attention, with the Cleveland Browns as the team most intensely trying to acquire him. Multiple reports say the Patriots have no plans to trade Garoppolo and would rather have him on the roster as insurance in case Tom Brady gets hurt or begins to show signs of age.

Print Headline: Foley passes his award to a colleague