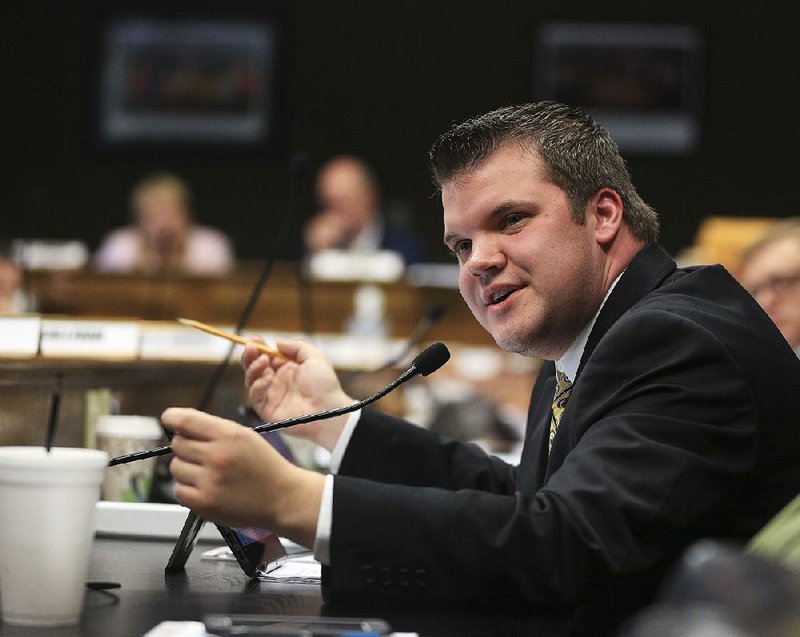 Rep. James Sturch, R-Batesville, asks a question Tuesday in the House Education Committee about the bill establishing student “education savings accounts” that could be used as parents see fit.

A modified bill granting families education money to spend as they see fit was narrowly approved Tuesday by the House Education Committee.

Rep. Jim Dotson, R-Bentonville, reduced the financial impact of House Bill 1222 at the request of the governor, who was concerned by the bill's cost.

"It changes the bill completely from a full program to a definite pilot program," he said.

Dotson said the amended bill would cost no more than $3 million in tax credits after the first year. The cost would not grow beyond that. And the program would expire automatically after four years; the original version of the bill had no expiration date.

The remainder of the bill was unchanged and opponents said Tuesday that they remained concerned about accountability.

"We remain opposed to the diversion of tax dollars to private schools that are unaccountable in any form," said Tracy-Ann Nelson, executive director of the Arkansas Education Association.

The bill "nickel and dimes" public schools, she said. Given the cost, "Who's a priority? The majority of students in Arkansas or just a select few?" Nelson said.

HB1222 would establish student "education savings accounts" worth about $6,712.50 per year.

The money could be spent by parents in 13 categories. Covered expenses would include private school tuition, textbooks, testing, college, summer programs, speech pathology, transportation and uniforms. The savings accounts would be managed by nonprofit organizations.

Under HB1222, individual and corporate taxpayers essentially could choose to divert their income tax dollars to the nonprofit organizations. A taxpayer would donate to the nonprofit, then receive a tax credit from the state.

A state Department of Finance and Administration fiscal-impact statement found the previous version of the bill would cost the state $6.5 million in fiscal 2019. The cost could have increased at a rate of 10 percent per year.

The House Education Committee approved the bill 11-5 with four members not voting. Eleven votes are needed to pass a bill out of the committee. It heads to the House for further consideration.