Ninety-three high-end guns and gun parts once owned by Dr. Randeep Mann, who is serving a life sentence for engineering a 2009 explosion that severely injured Dr. Trent Pierce, then chairman of the state Medical Board, will be sold, with all proceeds going to Pierce, a federal judge said Tuesday.

The order by Chief U.S. District Judge Brian Miller ends a legal battle over the guns that has been raging for nearly three years, since the federal government sought court permission to destroy the machine guns, silencers and receivers that were confiscated on Aug. 8, 2009, from Mann's Pope County home.

The guns were seized while Mann was in jail, facing charges in the grenade explosion that occurred the morning of Feb. 4, 2009, outside Pierce's West Memphis home. Pierce, then 54, was preparing to drive to Little Rock for a medical board hearing when he moved a tire he found resting against the bumper of his vehicle, causing a grenade taped to the underside of the tire to explode.

While the guns were eventually determined to have no relation to the crime being investigated, they were seized from the home because federal prosecutors said they couldn't remain in the custody of Mann's wife, Sangeeta, who wasn't a licensed firearm dealer.

A federal jury convicted Mann in August 2010 of several charges related to the explosion, which the jury decided was payback for a medical board investigation that threatened to permanently revoke Mann's medical license. He was sentenced to life in prison, leaving ownership of the gun collection in limbo, and prompting prosecutors to ask in 2014 that the collection be officially forfeited to the government to be destroyed.

Pierce and his wife, Melissa, objected to the government's request, arguing that the gun collection, estimated to be worth $1 million to $2 million, could be turned over to a licensed firearm dealer and sold, with proceeds being applied to an outstanding civil judgment that the Pierces anticipated and eventually obtained against Mann in 2015.

A Crittenden County Circuit Court jury awarded the Pierces $122.5 million in compensatory and punitive damages as a result of the explosion, which left Pierce with permanent scars and injuries, including the loss of an eye, the loss of hearing in one ear, the loss of his sense of smell and the loss of most of his teeth.

A bench trial over the fate of the 93 guns and parts, and one unregistered .12-gauge shotgun that federal agents had seized from Mann in March 2009, was scheduled for last August but was canceled at the last minute after the parties agreed to let Miller decide the case based on written arguments.

Miller rejected Sangeeta Mann's claim of marital interest in the gun collection, saying, "Arkansas law is clear ... that 'the law regarding marital property does not apply in situations other than divorce.'"

He also rejected the government's claim that the guns were subject to civil forfeiture because they were unlawfully possessed by Sangeeta Mann, even though she was never charged with illegally possessing them. Miller noted that Sangeeta Mann was following her attorney's advice at the time in trying to get the guns legally transferred to a licensed dealer, but that arrangements couldn't be made.

Miller agreed with the Pierces' attorney, Bob Cearley of Little Rock, that the guns weren't related to any violations of federal law and so, "to put it clearly, the facts of this case do not warrant forfeiture."

"Normally, Dr. Mann would be entitled to proceeds from the sale of the ... firearms even though he cannot legally possess them," the judge wrote. "That is not the case here, however, because Dr. Mann currently owes Dr. Pierce $122.5 million as a result of Dr. Pierce's judgment against Mann in Arkansas state court."

Miller noted that Cearley had established the Pierces' legal claim to the gun collection when he filed a writ of execution in an effort to satisfy a portion of the civil judgment, even though the writ was returned unsatisfied because the government kept the guns in a hidden, secure location, and could not produce them.

"Because of the unsatisfied judgment lien against Dr. Mann, Dr. Mann's interest in the proceeds from the sale ... will be paid to Dr. Pierce to satisfy Dr. Pierce's judgment lien," Miller said.

The judge said he will consult with the government and the Pierces in appointing a special master to begin the process of selling the firearms, with 100 percent of the proceeds going to Pierce.

Cearley said Tuesday afternoon, after telling the Pierces about Miller's order, that both "were elated and gratified."

As a result of a long-term disability insurance policy that Mann took out because of advanced osteoarthritis in his left shoulder, Pierce already has received $496,608.28, the total amount of restitution for economic losses that Mann was ordered to pay him in the criminal case. That amount was what was leftover from the total restitution order of $1,015,281.24 after the insurance companies that covered Pierce's medical and vehicle bills were paid back first.

The disability policy pays out roughly $20,000 a month, with half going to Sangeeta Mann.

Cearley said that the Pierces have not been able to recoup any of the civil judgment so far, but that Miller's order will make it possible to collect some of that judgment. He noted that Pierce, who suffers permanent injuries for which he needs continuing care, has continued to practice medicine part time.

"He's a remarkable guy," Cearley said, noting that even though the scars are visible up close, most people "wouldn't notice anything" unusual about Pierce from a distance. 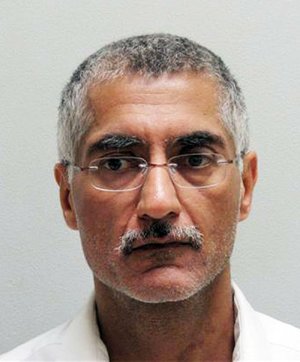 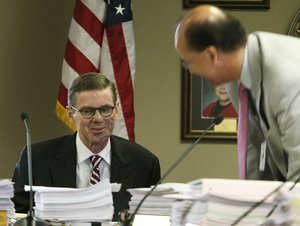 Photo by Staton Breidenthal
Dr. Trent Pierce is shown in this file photo.