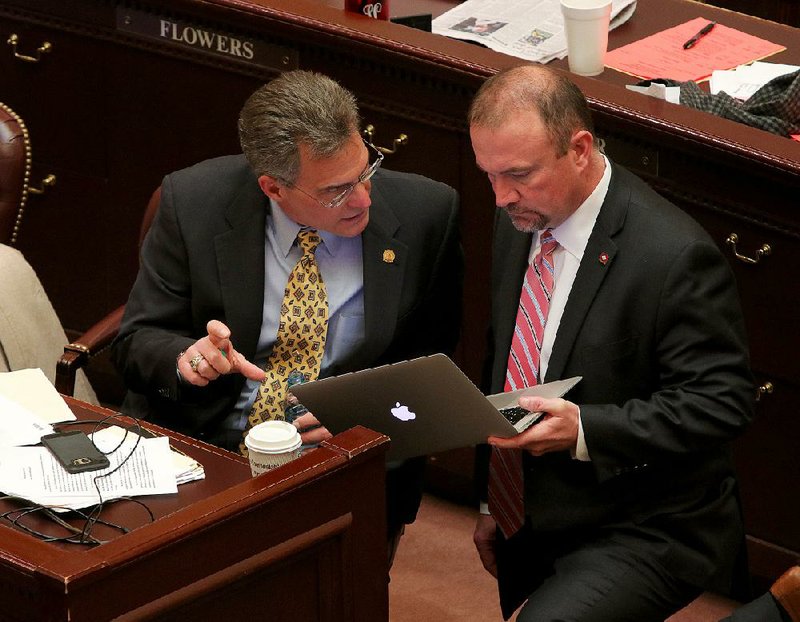 Later in the day, his House colleagues voted to allow handguns on the chamber floor.

Lawmakers approved a series of Senate amendments to House Bill 1249 to allow gun owners with concealed-carry permits and up to eight hours of active-shooter training to take their weapons onto college campuses, into bars and churches, and into many public places, including the Capitol in Little Rock.

The bill now goes to Gov. Asa Hutchinson, who plans to sign it into law, a spokesman said Wednesday.

Collins has tried to pass legislation to allow guns on campus in every legislative session since 2011. The closest he came was in 2013 when legislators passed the current law, which removed a blanket prohibition against carrying guns on campus, while allowing individual universities to adopt no-guns policies.

Since then, every public university and college in the state has banned weapons on campus.

Collins' bill this session aimed to override the bans by requiring colleges and universities to allow licensed faculty and staffed to go armed on campus with some additional training.

While the bill was being considered in committee, lawmakers heard from college students, administrators and police, who asked that the status quo be left alone.

Gun-rights advocates also spoke; some applauded the legislation for getting rid of some "gun-free zones," while others argued that additional training requirements were unnecessary.

The House passed the bill last month, but it changed substantially in Senate. Amendments to HB1249 applied the legislation to all concealed-carry permit holders, provided they take the added training, and expanded its application to public places beyond colleges.

Licensees, even if they get the active-shooter training, would still be prohibited from bringing guns into courtrooms, prisons, dorm rooms and college grievance hearings.

The final outcome was pitched as an agreement between Collins, the governor, the National Rifle Association and Senate sponsor Sen. Trent Garner, R-El Dorado.

Hutchinson had said he preferred additional training be a requirement for a bill reaching his desk.

Still, some members of the House said additional training would not be enough to ease their concerns about lawmakers bringing guns onto the chamber floor.

Rep. John Walker, D- Little Rock, said the bill reminded him of "the old West," and Hendren, the governor's brother-in-law, also questioned the wisdom of rolling back the current prohibitions.

"I have enough problems controlling myself as it is," Hendren said in the House well, wielding his open pocketknife as a prop.

"This bill needs fixing," he said. 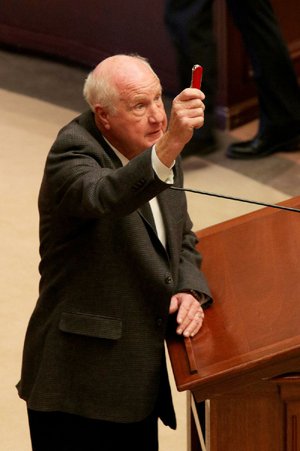 Photo by Stephen B. Thornton
Rep. Kim Hendren, speaking Wednesday against legislation that among other things would let lawmakers carry guns in the state Capitol, said Capitol security stopped him earlier because of his pocketknife. “This bill needs fixing ” he said.