More people are picking up pickleball 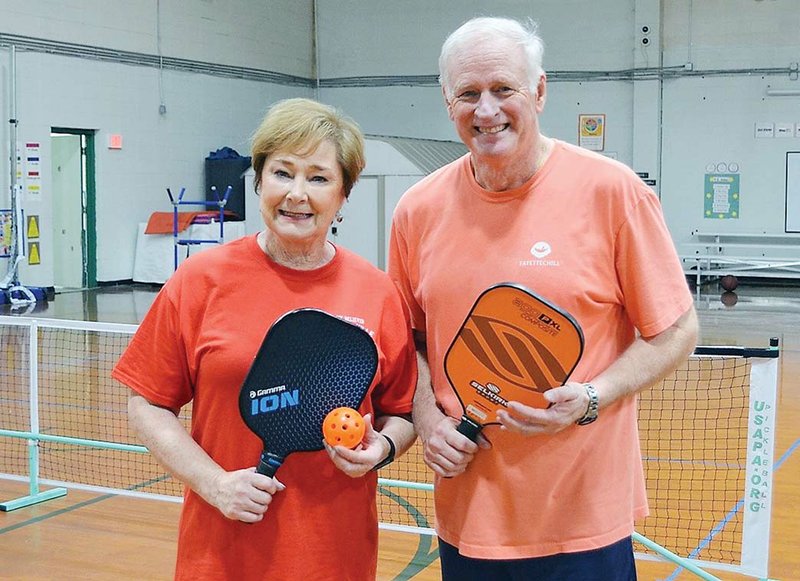 Danville Mayor Phil Moudy and his wife, Mary Ann, both 68, play pickleball several times a week, including every Tuesday night at the Danville Middle School gym. Moudy said it’s a growing sport, and he is proposing a four-court pickleball complex for the city.

Pickleball is picking up in popularity.

Danville Mayor Phil Moudy, 68, and his wife, Mary Ann, 68, are two of those who play the sport with the funny-sounding name.

According to the U.S. Pickleball Association, it’s the fastest-growing sport in the United States.

The game, which is described as a combination of tennis, badminton and pingpong, is played with a wood or composite paddle and plastic ball with holes like a whiffle ball, and the court is smaller than a tennis court. The net is shorter, too.

Moudy said Danville residents play every Tuesday in the gymnasium at Danville Middle School, and some Saturdays in a gym in Plainview.

He’s planning to up Danville’s game, though.

“I’m looking here at Danville to put in three or four courts,” he said. The city engineer made a presentation to Moudy this month.

Moudy said he hopes to fund the project, which is in its preliminary stages, with a

50-50 matching grant, which he will apply for this fall.

Tentative plans are to refurbish the city’s tennis courts, which Moudy said are no longer used, and create four lighted, outdoor pickleball courts.

Robin Pickens, 52, founder of Danville Pickleball and the area’s official ambassador, said she discovered the sport by accident about five years ago.

“It was kind of a fluke deal, really. I work from home, and I decided I was going to sit there and get fat. I got online to look for something to do; pickleball popped up on my screen. I used to play racquetball, and I used to play tennis.”

Pickens does online marketing from her home in Bluffton in Yell County.

She researched pickleball further and liked what she saw.

“I said, ‘This looks like something I could do without hurting myself, burn a few calories, get out of the chair,’” she said.

“They have a bunch of people over there,” she said. “I went over there. They just took me in and said, ‘You can sit and watch.’ Then they stuck a paddle at me — within 10 minutes, I was hooked.

She formed the Danville group about four years ago, and “it just exploded,” she said. Its Facebook page can be found at Danville Pickleball-Arkansas.

The website, USAPA.org, states that the sport was invented in 1965 on Bainbridge Island near Seattle, Washington. Three dads whose kids were bored in the summer are credited for creating the game.

There are several stories about how the sport got the name pickleball, including that one of the founders’ dogs was named Pickles, and he ran around with a ball. That’s the story Pickens likes because “it’s easy to remember,” she said.

Playing pickleball is free with the Danville group, Pickens said, and the age of participants ranges from late 70s to 14 years old.

She said 10 to 25 people show up each week, and if they’re playing doubles, 12 people can play at once.

Also, playing doubles is easier on people physically because “you have way less property you have to cover,” Pickens said.

The group plays some Saturdays in a gymnasium in Plainview and every Tuesday at 6 p.m. in the middle school gym in Danville. Members taped the lines on the existing tennis courts in the school gym with the “hopes of getting permanent lines put down.”

“The school administration has been super great to let us go in there,” Pickens said.

She’s excited about the possibility of dedicated pickleball courts in Danville, though.

“It’s a great little game, and the higher-end tournament players — you can spin the ball and make it do weird things. There’s a lot of finesse and strategy if you want to get up in that level. We’re just playing for fun,” she said. “We want to put Danville on the map as far as pickleball goes.”

Pickleball is popping in Heber Springs, too.

Stacey Mills, director of Heber Springs Parks and Recreation, said the sport is a daily activity at the Heber Springs Community Center.

Mills said a half-dozen men and women, including Joe Dailey, approached him three years ago when he was hired as director about starting pickleball.

“It’s just grown. We have every bit of 50 of our members who play every day,” he said.

Mills said pickleball players must be members of the Heber Springs Community Center, which has four indoor pickleball courts. For tournaments, Mills tapes off areas to create an additional four courts.

The first tournament was held in August 2015, and he said more than 90 people participated, including players from Kentucky and Tennessee.

More than 100 people showed up last year, so Mills expects this summer to bring in a record number of players.

Mills said he puts all the information about Heber Springs pickleball on the USA Pickleball website, USAPA.org.

Shellie O’Quinn, director of the Melton Cotton City Event Center, said the facility has six pickleball courts marked off with tape, although she only has equipment for one court. It’s free to use the equipment right now.

“We don’t have that much demand for games. We’ve loaned our equipment out to Heber Springs,” she said. “We’ve hosted some demonstrations and workshops. It hasn’t caught on, but we’d love for it to.”

O’Quinn said that when they have spare time, she and other employees go play

O’Quinn said the game is easier to play than tennis because of pickleball’s slower pace and smaller court, and the sport takes place inside.

Her goal is for Greenbrier to get to the point where the city holds pickleball tournaments.

In Russellville, David Laseter is president of River Valley Pickleball.

When he answered his phone, cheering and hollering from pickleball players could be heard in the background at the Hughes Community Center, where he was playing.

“That’s Grandma, two sons-in-law — the whole family is over there going nuts over it,” Laseter said.

He said Russellville has three main pickleball groups — beginner, intermediate and advanced players, including him, who also travel to play in Hot Springs Village.

Laseter, 54, said baby boomers have picked up the sport, and he’s seeing a younger crowd pick up the game, too.

“Just real recently, it’s just exploded — we have all the young people playing now; college kids are kind of discovering it,” he said.

“We have 80-year-old people playing this like they’re 50. Talk about the fountain of youth,” Laseter said.

It’s free to play with River Valley Pickleball, he said.

“Find us playing; everybody has a spare paddle, and they’ll say, ‘Come on.’ Everybody’s laughing, having a good time,” Laseter said.

“The whole sport — it’s the fastest-growing sport in the world. I mean, it’s gone nuts,” he said.

Laseter said Russellville has an excellent reputation in pickleball circles, and the lack of courts is “the only thing holding us back.”

He said the Russellville Recreation and Parks Department is looking at transforming some of the city’s unused tennis courts into pickleball courts.

Pickens said the bottom line is that pickleball is an enjoyable sport for almost anyone, anywhere.

“We just want to encourage people to get healthy and get moving, and it’s so much fun. Beginners are always welcome. The equipment is here; just show up, and we’ll teach you,” she said.