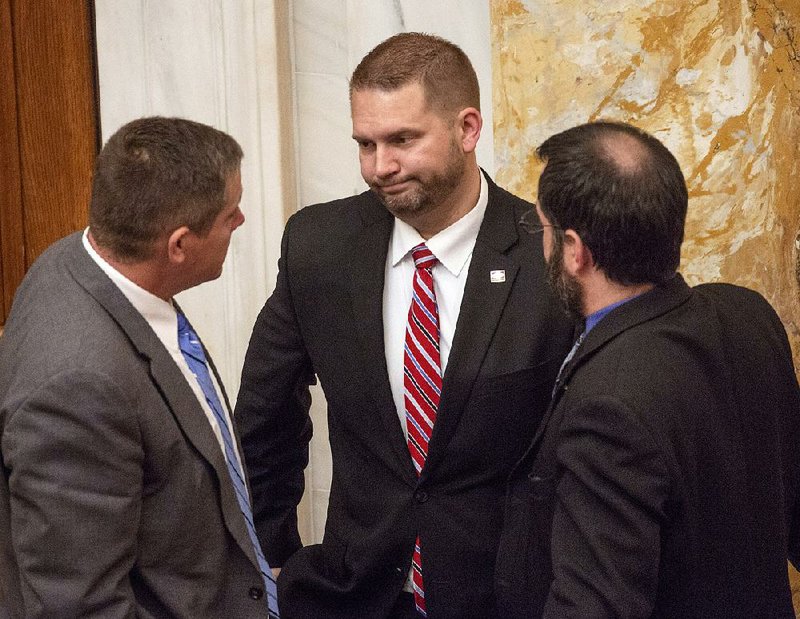 The House debated the role of public schools and availability of private options Thursday before failing to pass a measure giving families education money to spend as they see fit.

In the hallway outside the House chamber after the vote, Dotson said he would continue pushing for his bill. He said HB1222 gives poor families options because it puts students who receive free or reduced-cost school lunch first in line for its benefits.

"To empower a parent that doesn't have the means to make sure their student gets the education in a manner in which their student can best learn, I think that gives not only the individual family and student the best opportunity at life, but it also enhances our overall society," he said. "I think it's a lofty goal."

Republicans in the House chamber were split on the bill in part because they said they were concerned about harming public schools, which serve 477,000 Arkansas students.

After limiting the program's scope to address Gov. Asa Hutchinson's concerns about cost, Dotson's program would have been limited to about 670 students.

"Not every corner of Arkansas is the same," said Rep. James Sturch, R-Batesville, who voted against the bill. "The opportunities that exist in Northwest Arkansas do not exist in northeast Arkansas.

"In my area, there aren't that many private schools. There aren't any charter schools. Public schools are mainly the whole source of education in Independence County."

If poor families were to find alternatives to the public school, those schools would lose money, he said.

Sturch said the Calico Rock School District just passed the 70 percent poverty threshold, which means the state is providing an additional $170,000 to try to close the poverty gap and improve the quality of education.

If four poor students left, the district would lose the $170,000 in addition to the more than $26,000 the state provides to the district to educate those students.

HB1222 "completely changes the game for a small, rural school in northeast Arkansas," he said.

Other Republicans, such as Rep. Mark Lowery of Maumelle, said the bill is needed to close the gap in achievement between rich and poor students.

"So many of us advocate for school choice. That's all this is. It's an additional pilot program to be able to give choice," he said.

"The highest priority would be for national school lunch students. In other words, we're targeting this program to close the poverty gap through the use of something that most of us agree with, which is school choice."

Rep. Stephen Meeks, R-Greenbrier, implored his colleagues not to give into fear about worst-case scenarios.

"Unfortunately in this legislative session, I'm afraid that we have let fear stop us from doing some good things because we're comfortable where we're at," he said.

Republicans opposed to the bill were joined by most of the chamber's 24 Democrats.

"I'm gratified to know that some of our members are courageous and defend those people who are most defenseless," said Rep. John Walker, D-Little Rock. "The [Republican] speakers against this bill symbolize and represent the reality of where we are in Arkansas and the promise of where we need to be in addressing the best educational opportunities for all of our people."

Tracy-Ann Nelson, executive director of the Arkansas Education Association, and other public education advocates had opposed the bill because they said it lacked accountability and "nickel and dimes" public schools.

"When our Legislature doesn't look at education as a big picture -- but just as these micro things -- and not understand that 477,000 students need their support, that concerns me," she said after the vote Thursday. "There seems to be a lack of vision in understanding that over 90 percent of Arkansan children need public education to thrive for them, and we all have an obligation to be invested in that."

Dotson said he worked for months on the bill. He had amended HB1222 six times since filing it in March.

The latest change -- requested by the governor -- made the savings accounts a pilot program that would expire after four years and cost no more than $9 million in tax credits over that period.

Legislation on education savings accounts has been enacted in five states: Arizona, Florida, Mississippi, Nevada and Tennessee, according to the National Conference of State Legislatures.

Advocates say Nevada has the most expansive law, but the Nevada Supreme Court ruled that the state could not pay for the accounts using money intended for public schools.

Under HB1222, individual and corporate taxpayers could effectively choose to divert their income tax dollars to a nonprofit organization responsible for administering the education account program.

The tax credits would not exist in the first year.

"I think the education of kids is the only meaningful thing we can give to the next generation," Dotson said after the vote.

Representatives should reconsider their vote because "this gives parents that ability to customize an education for their student in the way that their student needs," he said.

"They have the most vested interest to ensure that student has the best educational opportunity."

*CORRECTION: House Bill 1222 would allow parents to spend state education money as they see fit, but the payments actually would be made by nonprofit corporations to education providers. The education savings accounts allowed by HB1222 would be managed by those nonprofit organizations. Under HB1222, funding for the savings accounts would come from individual and corporate taxpayers diverting their income tax dollars to the nonprofit organizations. Those taxpayers would receive a tax credit. A previous version of this article incorrectly described the funding.