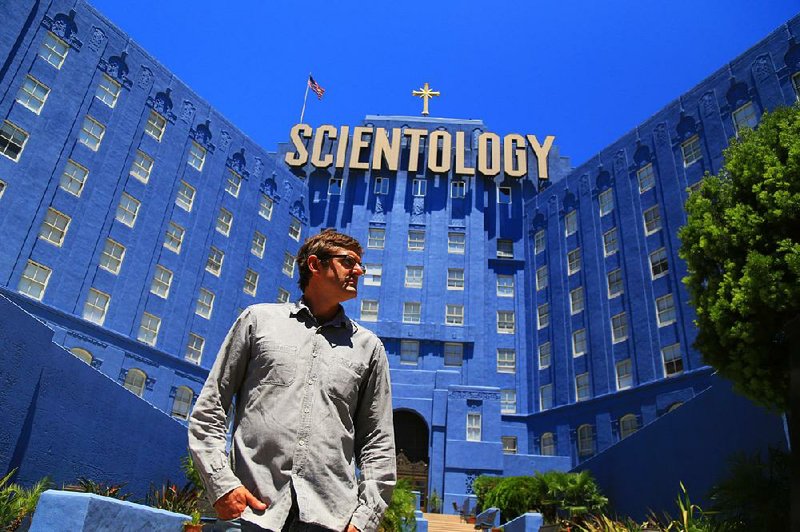 The intrepid Louis Theroux seeks to understand Scientology by re-enacting its rituals in My Scientology Movie, which is screening next week at Little Rock’s Ron Robinson Theater.

Documentarian Louis Theroux looks like John Oliver, host of HBO's Last Week Tonight. But before you assume Theroux -- son of famous travel writer Paul, nephew to novelists Alexander and Peter, and cousin to screenwriter-actor Justin -- is somehow capitalizing on his physical resemblance to the comedian/news reader, consider that he has been conducting awkward interviews and investigating curious subcultures since the '90s when he was a correspondent for Michael Moore's TV Nation series. He has explored the Westboro Baptist Church, American neo-Nazis and ultra-Zionists in Israel for the BBC. 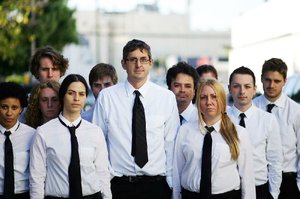 Louis Theroux recruits actors to re-create important moments in the history of Scientology for his documentary My Scientology Movie, a tactic that brings him under the scrutiny of the controversial religious organization.

So while his resemblance to Oliver might be a little distracting, it's fair to say Theroux has seen a lot of life's rich pageant and earned his hangdog drollness. It might better be said that John Oliver reminds us of Theroux.

My Scientology Movie will screen at the Ron Robinson Theater, 100 River Market Avenue in Little Rock on Tuesday and Wednesday at 6 p.m. Tickets are $5. For more information go to cals.org/ronrobinson

Well, with that elephant properly addressed, let's move on to My Scientology Movie, which was directed by John Dower but is indisputably Theroux's show. (Unless it's Marty Rathbun's.)

Theroux says his idea was to do a documentary about Scientology -- the pseudo-scientific religious organization that was the subject of Alex Gibney's remarkable 2015 documentary Going Clear -- using the same methods he'd used to explore other subcultures. Namely by infiltrating the group, living among its members, and participating in its rituals.

While it's probably fair to assume Theroux knew that was never going to happen, he never breaks character -- he insists he is an earnest, "honest" journalist determined to give science fiction writer L. Ron Hubbard's gospel a fair shake. A confirmed atheist, Theroux contends he wants to believe in the church's message of better living through applied science.

After years of being stonewalled by the church, Theroux decides on another strategy for understanding Scientology. He sets up a studio in Los Angeles and begins staging dramatic re-enactments of key moments in the movement's history, informed by interviews with former members of the church -- chief among them the infinitely fascinating Marty Rathbun, who was also one of the highlights of Gibney's movie.

Rathbun was for 25 years one of the highest profile and most powerful members of the church. As Scientology's inspector general, he says, the church's hierarchy was at his "beck and call." After he left in 2004, he was allegedly subjected to a systematic program of harassment (known in the church as "squirrel busting") as the church attempted to discredit him.

Rathbun comes across here -- as he did in the Gibney documentary -- as a cross between a teddy bear and a Marine Corps drill instructor; he presents as a gently intelligent man who understands his own volatility. Gene Hackman could have played him a few decades ago; masterful character actor Jim Beaver (Deadwood, Justified) would probably love the chance to explore his complexities and contradictions.

Rathbun serves as Theroux's right-hand man and chief technical consultant as he seeks to cast actors to play Scientology head David Miscavige and the religion's most famous adherent Tom Cruise (played in the re-enactments by Andrew Perez and Conner Stark, respectively). It gradually becomes clear that the coaching of these actors and his confessions to Theroux are almost a kind of therapy for Rathbun, who has a deep aversion to re-enacting some of Scientology's rituals or being physically proximate to his old stamping grounds. Under Theroux's empathetic probing, it becomes clear that he's still deeply conflicted about his role in the organization.

Rathbun was the organization's chief enforcer, the man in charge of "auditing" Cruise (and who claims those confessional sessions were secretly videotaped to be used against the movie star should he ever rethink his allegiance to the church). Rathbun has said he was instructed to wiretap Cruise's wife at the time, Nicole Kidman, because she had been declared a "suppressive person" by the church. On camera he admits to busting another ex-member in the face back when they were still involved with Scientology.

"Marty knows where all the bodies are buried," the punchee tells Theroux.

Almost as soon as Theroux begins working on his film, the church begins to push back -- which, his protestations aside, was probably his plan all along. This results in some bizarrely funny encounters with Scientologists who insist on filming every interaction with the film crew that's also filming them.

That Theroux suspected this would happen is clear -- he wouldn't have much of a movie without the church's heavy-handed attempt to bully him. But despite the disingenuous premise, the movie stands as an entertaining and alarming companion to Gibney's more comprehensive Going Clear (which was in production about the same time). If nothing else, it's worth seeing for a strange cameo by Paz de la Huerta, best known for her role as Nucky Thompson's girlfriend Lucy on Boardwalk Empire.

While Rathbun and Theroux are preparing to film in a Hollywood hotel room, de la Huerta approaches them, knocking on the window of the room before entering, wearing a bikini and sipping a drink.

"You can't film me," she announces, before explaining to the filmmakers that she's an actress who's appeared in more than 45 films and is, well, available for hire.

"They sent her over, don't you think?" he asks Rathbun. "Honey trap!"

Apparently not. De la Huerta is not a Scientologist. That we know of.