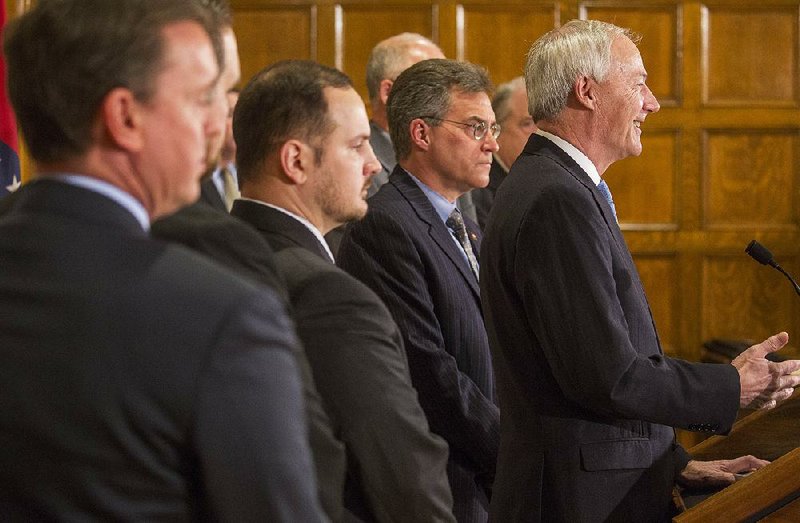 Rep. Charlie Collins (second from right) stands Wednesday with Gov. Asa Hutchinson, who announced that he had signed Collins’ concealed-carry gun bill. Hutchinson said he is “convinced the public will be more safe” under the new law.

Gov. Asa Hutchinson on Wednesday signed into law a bill that will allow Arkansans with concealed-carry permits to take firearms onto public college campuses and many other public places, including into the state Capitol, if they get up to eight hours of training.

"This bill in my view reflects the will of the General Assembly and is constitutional and will balance public safety and the Second Amendment," Hutchinson said.

The Republican governor said he signed House Bill 1249 by Rep. Charlie Collins, R-Fayetteville, into Act 562 before a news conference in the governor's conference room in the Capitol. At the news conference, the governor was flanked by a handful of state lawmakers, state police Director Bill Bryant and Chris Cox, executive director of the National Rifle Association's Institute for Legislative Action.

Act 562 will become effective Sept. 1 and will require the Arkansas State Police to promulgate rules to design a firearm training program within 120 days of that effective date.

The governor said the bill "is a compromise piece of legislation that is consistent with my view of how firearms should be handled in sensitive areas."

After the Sept. 11, 2001, terrorist attacks in New York, Pennsylvania and Washington, D.C., Hutchinson said Congress passed a law that allowed flight-deck officers on airplanes to be armed. At the time, he was an undersecretary in the U.S. Department of Homeland Security.

"We had the training requirements in place, and it has enhanced security of airplanes," the governor said.

"After the Sandy Hook elementary school shooting [in Connecticut in 2012], I worked with the NRA [and] I worked with the Secret Service as to what we should do to further protect our schoolchildren, and so we did enhance training requirements for school staff and gave them the option [of carrying firearms]," he said.

Under the new legislation, Hutchinson said the state police director will design the training in coordination with universities, campus law enforcement and other public institutions.

"The public should not be confused that everyone with a concealed-weapons permit is going to be allowed to go into sensitive areas. That is not true," he said.

"It's going to be [a] much more limited population, but they will be trained and obviously they will be trained in active-shooter circumstances, how to coordinate with law enforcement and when that is done, I am convinced the public will be more safe. We will have more safety in our institutions and our public spaces," Hutchinson said.

Asked how many concealed-carry-permit holders he projects will get the training available under the bill, Bryant said, "It would just be a guess on my part. More than one and less than a million."

But Rep. Greg Leding, D-Fayetteville, who voted against HB1249, said Hutchinson's signing of the bill is contrary to what professors, parents and students had been urging him to do through social media.

"I don't know how you could have been reluctant on the original 1249 and ultimately embraced the bill that passed," he said.

Leding said he believes that the Senate's amendments made the bill worse.

He said he is unaware of any discussions about adding further exceptions for places such as sporting events and day care facilities on campus.

He said it was "ridiculous" to allow someone with a loaded weapon into a Razorback football game.

"I don't know why you can't take an umbrella into the stadium, but you can take loaded guns," he said.

At his news conference, Hutchinson said, "A bad guy could get a gun into Razorback Stadium now. Under this current law, if you have got the enhanced training, then you would be able to go into that facility."

Collins said the bill "is increasing the safety of Arkansas by deterring some of these crazy killers from choosing to go to our campuses and potentially murder people.

"This is not a panacea. I don't pretend that it is. Bad things can happen. There is no such thing as a perfect solution, but I believe it is going to move us in the right direction," he said.

Spokesmen for the state's public colleges and universities that have opposed the measure generally had a muted response to the governor's signing of this legislation.

"We will work collaboratively with the UA System as it establishes policies, guidelines and practices that align with the law as it affects our campus," said Steve Voorhies, a spokesman for the University of Arkansas, Fayetteville.

"We have also begun work on an information portal for our campus to answer questions, and share policies and guidelines as they are developed through the UA System," he said.

Bill Smith, a spokesman for Arkansas State University at Jonesboro, said, "While we have expressed concerns regarding the bill, we recognize the General Assembly has spoken, and we will begin preparations to comply with the law when it goes into effect this fall."

Hutchinson said there are restrictions under the law. Even with up to eight hours of training, holders of concealed-carry permits would be barred from storing guns in dormitories or residence halls at colleges, from taking guns to grievance hearings, public schools, pre-kindergarten, prisons and courtrooms or the location of administrative hearings under the law, he said. But a justice of the state Supreme Court or a judge on the Arkansas Court of Appeals would be allowed to carry a gun into the Justice Building.

Senate President Pro Tempore Jonathan Dismang, R-Searcy, said his Senate Bill 724 would exempt the University of Arkansas for Medical Sciences in Little Rock from the law.

Asked whether he supports Dismang's legislation, Collins said, "I am very open to looking at different ideas that people have.

"We just got this legislation through a pretty laborious process. It is not even in effect yet. It is going to take months actually until the training is designed, the legislation is in effect, so I want to make it as good as possible," he said.

"In my initial bill, I had an exemption for UAMS within a half-mile radius of the emergency room. Given all the regular murders and gang interactions that they tell me are involved down there and the increased law enforcement that was the basis for me in my original bill, I remain open to doing what achieves our goal, which is protecting the lives of loved ones," Collins said.

Austin Bailey, volunteer leader with the Arkansas chapter of Moms Demand Action for Gun Sense in America, said: "Being one of thousands of Arkansans fighting to stop this dangerous legislation has been an eye-opening experience.

"I've learned that our state legislators -- and even our governor -- listen to the gun lobby over their constituents and the people who will be directly affected by this legislation. That's something we won't soon forget," she said in a written statement. "This legislation will make everyday life in Arkansas more dangerous. State legislators should know that passing this gun lobby priority will only motivate supporters of gun sense to get louder in Arkansas -- our kids are at risk, and we will not be silent while legislators gamble with their safety." 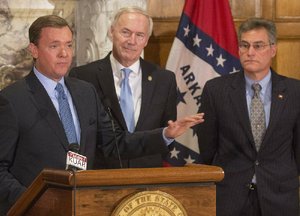