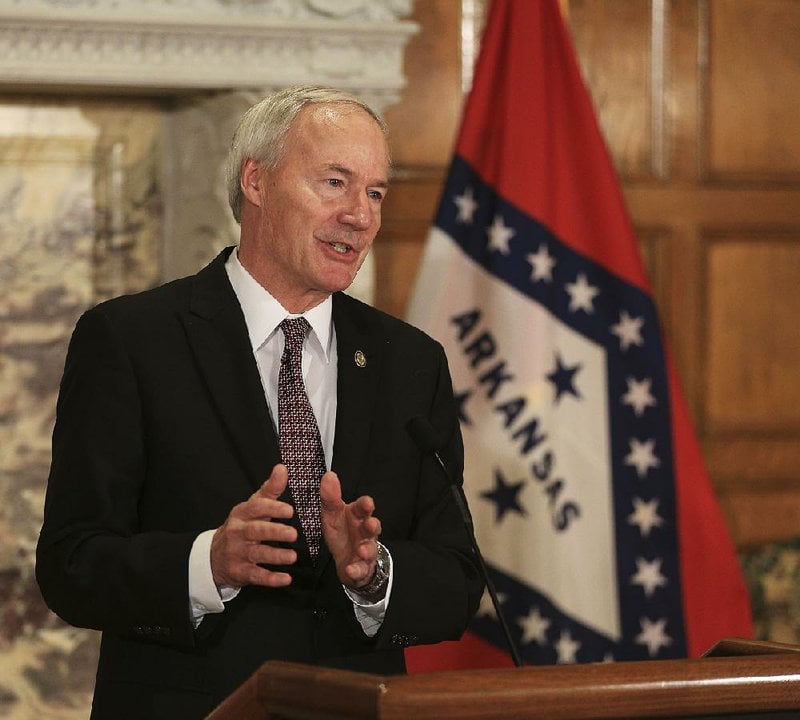 Gov. Asa Hutchinson said Tuesday that he expects "a dip" in the state's general tax collections for this month, which will be reported next week.

Through the first eight months of fiscal 2017, net general revenue available to state agencies has increased by $19 million to $3.43 billion, but it's $15 million behind the forecast for the fiscal year ending June 30.

"In terms of the revenue report for [March], which will be released next week, I expect a dip caused by changes in the reporting times initiated at the federal level. We will continue monitoring these month-to-month fluctuations as we get closer to fiscal year-end," the Republican governor said in a written statement.

Hutchinson spokesman J.R. Davis said Tuesday night that he doesn't know how much of a dip in state general revenue is expected for this month's tax collections.

A Joint Budget Committee co-chairman, Sen. Larry Teague, D-Nashville, said: "It is worrisome. No question about it."

Hutchinson's statement came a day after legislative leaders released a proposed general revenue budget of $5.49 billion for fiscal 2018 -- a $163 million increase over the current fiscal year. The proposed budget, resulting from negotiations among legislative leaders and Hutchinson, would increase the state Department of Human Services' general revenue funding in fiscal 2018 to $1.55 billion -- an increase of nearly $113 million over the fiscal 2017 budget.

Earlier in the day, the other Joint Budget Committee co-chairman, Rep. Lane Jean, R-Magnolia, said, "We have Medicaid and obligations, and that's what is eating us up. 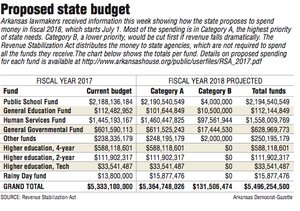 "Something in this country and the state has got to curb costs of it because it is just escalating," he said in an interview.

Under the proposed fiscal 2018 Revenue Stabilization Act, the Department of Human of Services' grants general revenue budget, including Medicaid, would increase by $75 million to $1.14 billion and the department's Division of Children and Family Services budget would increase by nearly $27 million to $118.3 million.

The state's share of the cost of its version of Medicaid expansion -- called Arkansas Works -- is estimated to be about $100 million in fiscal 2018, with about $25 million of that funded through insurance premium taxes that have been directed to the department for that purpose, said Jake Bleed, a spokesman for the state Department of Finance and Administration. "The remaining match will be paid for with a combination of state funds, including general revenue and general improvement funds allocated to the department," he said.

Under the Medicaid expansion, Medicaid funds are used to buy private insurance for low-income people.

Referring to the rest of the budget, Hutchinson said the proposal "reflects more resources for foster care, prisons, education -- including $3 million of additional funding for Pre-K, $26.7 million for foster care, and $5 million for Mental Health Crisis Stabilization Centers.

"It is also important to cover the highway funding match due in September, and $20 million will be set aside from onetime funds for this purpose," the governor said in his written statement. He was referring to federal highway funds that will become available in the fall if the state can provide matching dollars.

"The budget is projected to allow for a modest amount of rainy day funds that are important for expected and unexpected state emergencies during the course of the year. As a reminder, $10 million of rainy day funds had to be used to relieve pressure on the foster care system last year, and there were emergency improvement needs at the School for the Deaf and School for the Blind," Hutchinson said.

On Tuesday, the state's budget administrator, Duncan Baird, told lawmakers that the Hutchinson administration is going to ask agencies to absorb more of the cost than originally expected for the overhaul of the state's pay plan for about 25,000 employees in the coming fiscal year.

In November, officials said the proposed overhaul of the pay plan would cost $30 million in general revenue in fiscal 2018, but they factored in $6 million in reduced expenses as a result of losing more than 1,000 employees, or 4 percent, through attrition.

During the budget committee's meeting, Sen. Uvalde Lindsey, D-Fayetteville, said an earlier version of the governor's proposed budget released in November included $24 million in the merit adjustment fund to help pay for implementing the pay plan, but the budget plan released Monday night by legislative leaders only includes $16 million for that fund.

"I think we are going to push the agencies to absorb more of that pay plan implementation," Baird said. "We do have the funds available through the rainy-day fund, if the funds are needed. That would have to come to the Legislative Council for approval, but the funds are there. ... I think it will require probably some adjustments as [agencies] implement the pay plan. I think that is really from day one what we wanted to ask the agencies to do."

In response, Lindsey said: "Mr. Baird, you just confirmed my fears. You're actually going to make up any shortfall in the pay plan by personnel reductions and savings, regardless of what the impact might be in the delivery of services to the citizens of this state."

Hutchinson has signed legislation that will overhaul the pay plan at a total projected cost of $57 million in fiscal 2018. These employees largely work at agencies other than the state's higher-education institutions. The average annual salary for these employees is about $38,500, and they aren't getting cost-of-living raises in fiscal 2017. The current pay plan was adopted in 2009.