Guns in stadiums would devastate programs 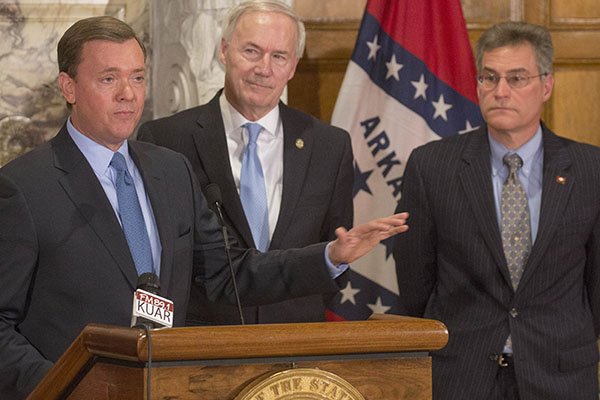 This is not about politics.

It is about the future of college athletics in Arkansas if the gun law, Act 562, is not amended to forbid firearms at sporting events.

Act 562 expands where concealed firearms are allowed and takes effect Sept. 1. Senate Bill 724 would amend the law to prohibit guns at the State Hospital, UAMS and sporting events held by state colleges and universities.

The bill was recommended Tuesday by the House Judiciary Committee. Now it is up to the Arkansas House of Representatives to pass it.

The sooner the better.

Failure to amend the act could mean trouble with the SEC for the University of Arkansas, Fayetteville. The conference cuts the UA a check for almost $40 million each year. The 14 members of the SEC do not have a contract, they work under an agreement. The presidents of the schools -- citing safety for their students -- have the right to vote a member out.

That's not to say the SEC has made a threat to the UA, but SEC Commissioner Greg Sankey did say it was the conference's desire to see athletic events and sports venues free of concealed weapons.

"House Bill 1249 creates concerns for the Southeastern Conference and its member institutions," Sankey said in a news release Tuesday. House Bill 1249 became Act 562 after it was signed by the governor.

If the amendment doesn't pass, every college in the state is going to find it almost impossible to schedule games with teams from outside of Arkansas.

Arkansas is the first state to pass a law where guns can be taken to college football and basketball games, so every parent in every other state -- as well as the coaches and their staff, and of course the players -- could be concerned about traveling here.

It also is going to make recruiting even more difficult for every college in Arkansas. Outside of Arkansas Baptist, all the colleges in this state recruit heavily out of state.

Billy Bob Linebacker from Louisiana could have a mom who says, "No way are you going to that state where open season is every Saturday."

At all SEC venues, tailgating starts early and ends late.

Lesson number one from both of them was that guns and alcohol don't mix.

The amendment makes sense, and for full disclosure, yours truly has a concealed-carry license that already has been renewed once. I believe in the right to bear arms for self-protection.

Bearing arms at a college sporting event is something entirely different. That carries with it the extra burden of how people in other states, whose sons and daughters might travel to Arkansas to play, feel.

As sure as the University of Arkansas for Medical Sciences should be exempt, so should all sporting events.

Think about it this way: What if Alabama had passed this law? This is a state where after a Crimson Tide loss to Arkansas in 2003, a fan was so distraught he shot his son.

Would you really want to put on your Hog hat and go to Tuscaloosa?

What about Louisiana, where a Georgia fan attending a game at LSU was locked in a portable toilet, rolled over in it and then beat up? His crime was wearing a Georgia T-shirt.

It is about the future of college athletics in this state. From Southern Arkansas University to Arkansas State University and every stop in between.