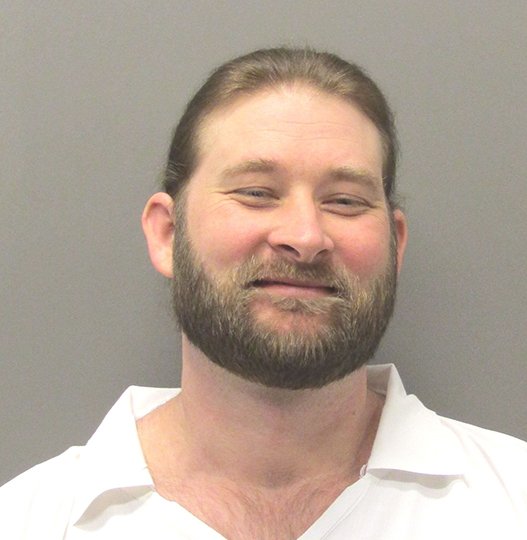 HOT SPRINGS -- The man accused of killing a Hot Springs Village police dispatcher told an investigator the victim was pregnant at the time of her death.

Former Hot Springs Village Police Department officer Tom Hickox testified Wednesday -- the second day of the first-degree murder trial of Kevin Duck, 33, who is accused of killing his girlfriend Dawna Natzke in 2011 -- that Duck told him during a voluntary interview that anytime he brought up aborting the pregnancy to Natzke, "she got mad at him."

Garland County deputy prosecutor Joe Graham did not ask Hickox anything further about the pregnancy, and defense lawyer T. Clay Janske did not bring it up under cross-examination.

No mention of the pregnancy was made Tuesday when multiple witnesses, including many close friends and family members of Natzke's, testified that Natzke was smoking and drinking at the party she and Duck attended Dec. 21, 2011, in Hot Springs Village.

It was the last time anyone saw Natzke alive. Her body was discovered by volunteer searchers Dec. 31, submerged in a pond near the Jessieville community in northern Garland County -- a location that Luther Duck testified Wednesday was less than a mile from his son's childhood home.

An autopsy determined Natzke, 46, died by blunt-force trauma and drowning.

Dr. Charles Kokes, chief medical examiner with the state Crime Laboratory, testified Wednesday that some parts of Natzke's body had been destroyed or carried off by animals, including the pelvic area, making it impossible to collect evidence from that part of the body.

Duck was stoic during Kokes' graphic testimony, but when he caught a glimpse of photographs of Natzke's body as Graham stood in front of Circuit Judge Homer Wright's bench, Duck flinched, turned and propped his head up on the table in front of him.

One of Natzke's sons leaned forward and buried his head in his hands as a relative comforted him. Natzke's other sons had left the courtroom before Kokes' appearance.

Kokes testified that Natzke's blood-alcohol level was 0.07 percent and that no illicit drugs were found in her system. Her body, he said, was covered in deep bruising and her brain had a subdural hemorrhage from a "life-threatening" blow to the head.

Natzke's lungs were full of pond water, indicating she was alive at the time she was put into the pond.

Kokes estimated that Natzke died no more than five to six hours after leaving the party Dec. 21, because not enough time had passed for the alcohol to be eliminated from her body.

On cross-examination, Janske asked Kokes if he was "only assuming" Natzke had died the night of the party but did not scientifically know for sure.

Kokes said he relies not only on scientific evidence but also on narrative of the events from police investigators.

Kokes compared the process to a doctor taking a patient history before a diagnosis. Janske continued to push, asking Kokes if there was any scientific evidence to indicate Natzke's time of death.

"It is based on what I had been told," Kokes said, adding that he relied completely on investigators' speculation of Natzke's alcohol consumption that night.

"Do you know if she drank beer after the party?" Janske asked.

Kokes also said that no rings or jewelry had been discovered on Natzke's body. Friends and family members testified Tuesday that Natzke had worn a diamond ring and a necklace to the party.

Three other state Crime Laboratory technicians testified that Duck was not a match to any of the foreign DNA found on Natzke's body. Toni Melvin, a forensic DNA analysis technician, testified that two DNA samples were found under the fingernails of Natzke's left hand. One was identified as Natzke's and the other was too limited for comparison purposes.

A section of barbed-wire fencing found with the body tested positive for Natzke, but Duck as well as Natzke's ex-husband Todd Natzke were excluded as contributors to the other unidentified DNA.

In other testimony, Tony Gabarino, a co-worker of Duck's at an auto-repair shop in 2011, said Duck was "in pretty bad shape" the day Natzke disappeared. Gabarino said he later saw Duck at a computer with the Greyhound Canada website displayed on the screen.

Gabarino said "everybody was watching everything" Duck did during that time and that Hot Springs Village Police Department investigators would have Duck going back and forth between the shop and the Police Department, which was across the street.

Duck was the first person to alert police that Natzke was missing when he went to the police station at 6:15 p.m. Dec. 22, 2011. Duck was told he couldn't file a missing persons report because he was not a relative.

Natzke's son Ronnie Moeller waited in the Police Department parking lot about 5:30 a.m. Dec. 23 for his mother to pull into her normal spot to work her shift as a dispatcher. When she did not show up, he went inside to file a missing person's report.

"No one was taking me seriously on the subject," Moeller said.

Later in the day, Katie Moosebroker, a longtime friend of Duck's, testified that Duck had called her numerous times the night Natzke disappeared. She did not answer his calls until the next afternoon.

Moosebroker said Duck told her he had broken up with Natzke and was upset. Later that night, she said, Duck showed up at her house asking to stay the night because he couldn't go back to Natzke's. Moosebroker said she told him no and Duck left the house.

Later that night Duck texted her and asked her to go to a hotel with him to have sex, Moosebroker said.

The prosecution did not present display boards, as they had with previous witnesses, of the text messages Moosebroker claimed to have received.

On cross-examination, Moosebroker told Janske that she doesn't save her messages.

By the time Wright recessed court for the day at 5:30 p.m., the state had called 19 witnesses to the stand that day and 16 had been called the prior day. According to the witness list, there are 23 more witnesses left before the trial is handed to the defense.

At the beginning of the day Wednesday, Wright announced that a juror had been dismissed and called an alternate to the vacant seat. The dismissed juror had been called to Wright's chambers at the close of testimony Tuesday. There was no reason given for the dismissal.

The third day of the trial will begin at 8:30 a.m. today in the Garland County Courthouse.