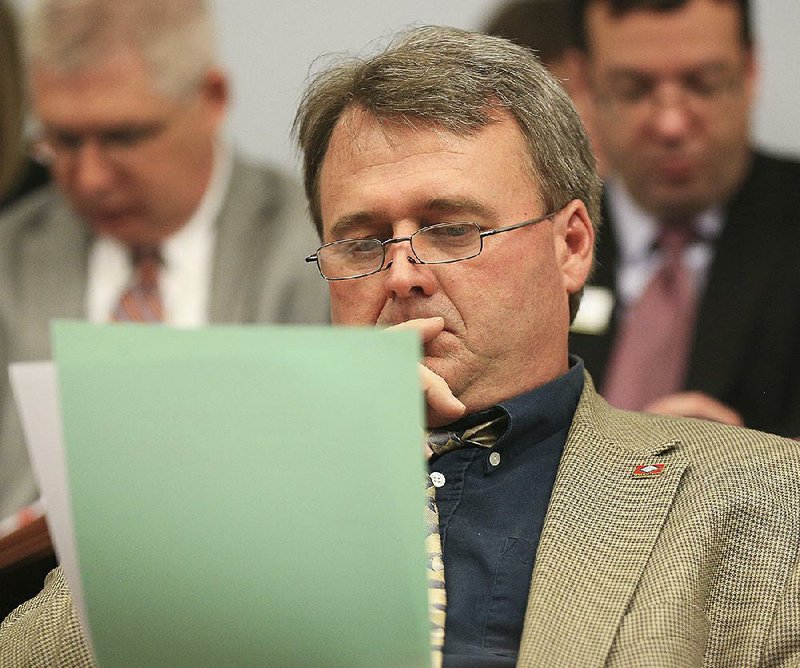 The Senate approved a bill Wednesday to levy a special tax on medical marijuana.

Lawmakers also considered bills regarding marijuana impairment in schools and limiting the ability of dispensaries to grow some plants.

House Bill 1580 by Rep. Douglas House, R-North Little Rock, passed 31-1. The bill had failed Tuesday in a 23-4 vote. Twenty-four votes are needed to approve changes to the voter-approved Arkansas Medical Marijuana Amendment. Laws enacted during this legislative session will help shape how medical marijuana is grown, distributed and used in the state.

The bill would impose a 4 percent tax on medical marijuana each time it changes hands. The tax compounds as it is levied on growers' sales to dispensaries and on dispensaries' sales to customers.

[BILL TRACKER: See the status of all marijuana-related bills in Arkansas Legislature]

"This is a critical bill," said Senate Majority Leader Jim Hendren, R-Gravette. The state regulatory program is a "house of cards" without necessary funding, he said.

Sen. Jake Files, R-Fort Smith, had argued against the bill Tuesday, saying fees imposed on marijuana facilities are expected to generate millions of dollars to support the program. He is chairman of the Senate Revenue and Tax Committee. He did not vote Wednesday.

Earlier in the day, the Senate Education Committee approved House Bill 1935 by Rep. Mark Lowery, R-Maumelle. The bill would allow a public school to bar a medical marijuana user from attending school or events if the user is impaired by the marijuana. The bill originally would have allowed students who tested positive for marijuana to also be banned.

Sen. Joyce Elliott, D-Little Rock, questioned how someone using medical marijuana would ever test negative for the drug.

The bill was amended in response to concerns about that provision from Elliott, Sen. Linda Chesterfield, D-Little Rock, and Sen. Blake Johnson, R-Corning.

The House Rules Committee failed to approve a bill Wednesday allowing the Arkansas Medical Marijuana Commission to decide whether dispensaries should be allowed to grow up to 50 mature medical marijuana plants.

The dispensaries will be allowed to grow plants under the Medical Marijuana Amendment but would face increased fees and regulations under draft rules from the commission.

The bill -- Senate Bill 254 by Sen. Greg Standridge, R-Russellville -- did not receive a motion. Sen. Missy Irvin, R-Mountain View, who presented the bill, said allowing dispensaries to grow plants is a threat to public safety.

Melissa Fults, executive director of the Drug Policy Education Group and a supporter of medical marijuana, spoke against the bill. She said the voter-approved measure prevents the five growers from acting as a monopoly and allows patients access to specialized strains.