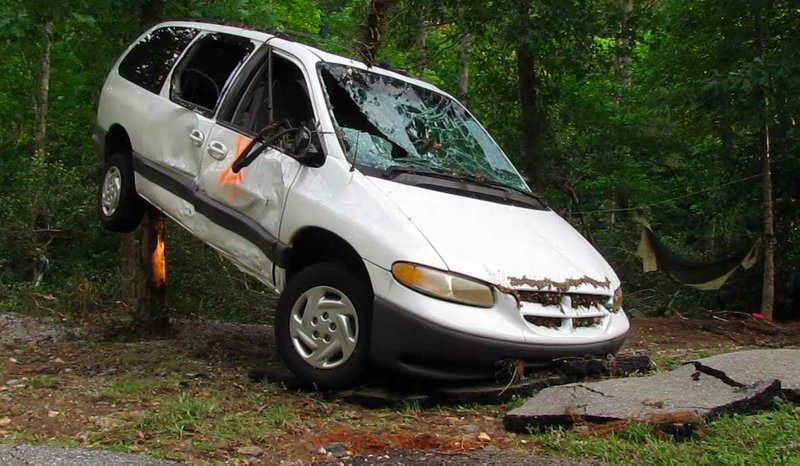 FILE PHOTO: A van swept away by floodwaters rests at an angle against a tree in 2010 at the Albert Pike campgrounds. The spraypaint on the passenger-side door signifies that it has been searched for victims.

TEXARKANA -- A federal judge in Texarkana dismissed 11 civil lawsuits Tuesday connected to the historic 2010 flood at Albert Pike campgrounds in the Ouachita National Forest that took the lives of 20 men, women and children.

U.S. District Judge Susan Hickey issued an 18-page opinion ruling that the federal* government is immune from the suits because of the Arkansas Recreational Use Statute, and shot down arguments from the plaintiffs' lawyers that exceptions outlined in the law should allow the civil actions to go forward.

In the pre-dawn hours of June 11, 2010, the depth of the Little Missouri River rose from 3 to 23 feet in a matter of hours. Recreational vehicles, cars, asphalt, concrete picnic tables and campers were swept away by the roiling water. Roughly half of those who lost their lives were from Texarkana and surrounding areas.

Eleven lawsuits were filed after the flood in federal courts in Arkansas, Texas and Louisiana, which were eventually consolidated into one action before Hickey.

The plaintiffs argued that the A̶r̶k̶a̶n̶s̶a̶s̶ U.S.* government's failures consisted of faulty warning equipment, inadequately trained staff, a lack of warning signs and a conscious disregard of its own scientific reports that place the Loop D campground in a 100-year flood plain. The civil complaints argue that an exception for "malicious" conduct, which includes a "reckless disregard of the consequences," outlined in the Arkansas Recreational Use Statute should apply.

"The Court finds in the present case that there is no evidence that the government knew that Loop D was in a floodplain or that its location posed a danger to individuals camping there and no evidence that they constructed and maintained Loop D in reckless disregard of the consequences. The EA [environmental assessment] stated that warning signs regarding possible flash floods would be posted in Loop D; however, the Court is unaware of any rule or regulation that required the warning signs to be posted," Hickey's opinion states.

The plaintiffs argued that the Arkansas Recreational Use Statute doesn't apply when an entrance fee is charged. Most of those who died in Loop D at Albert Pike paid $16 for the privilege of camping there.

"In the present case, Plaintiffs allege that they paid a $16 nightly fee to rent a campsite at Loop D, which included access to a concrete pad for an RV, water and electrical connections, and access to a sewage dump station. Plaintiffs further allege that this fee was an overnight admission fee to use the Loop D recreational facilities and thus the exception applies.

"The Court disagrees. The plain language of the statute expressly defines 'charge' as including fees for entry onto the land but excludes fees collected to offset the costs of maintaining recreational facilities," Hickey's opinion states.

If they choose, the plaintiffs can appeal Hickey's decision to the 8th U.S. Circuit Court of Appeals at St. Louis.

*CORRECTION: A federal judge dismissed 11 civil lawsuits Tuesday connected to the 2010 flood at Albert Pike Campgrounds in the Ouachita National Forrest that killed 20 people. U.S. District Judge Susan Hickey ruled that the federal government is immune from the suits because of the Arkansas Recreational Use Statute. A previous version of this article and headline that ran in Thursday’s editions incorrectly stated the plaintiffs had sued state government.