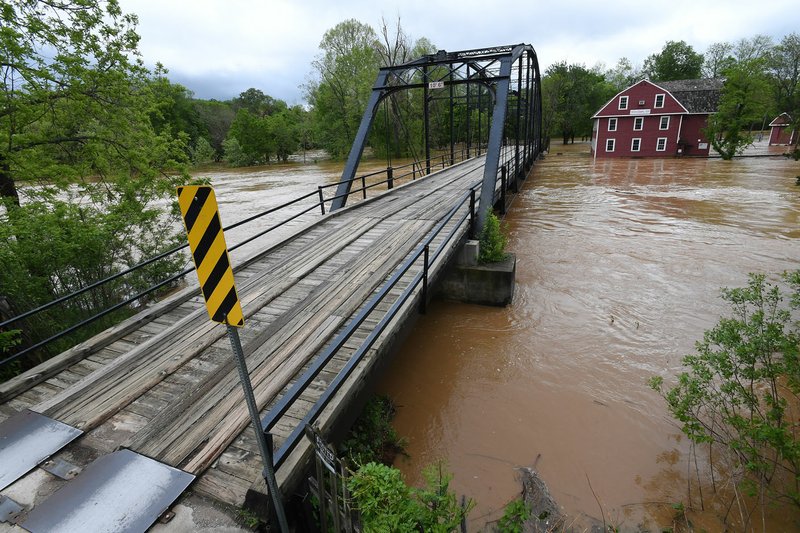 The War Eagle Mill stands in floodwater Sunday. Benton County officials say the historic War Eagle Bridge will be closed for repair beginning the week of May 8 and remain closed until the work is done later this year.

BENTONVILLE -- The historic War Eagle Bridge will be closed for repair beginning the week of May 8 and remain closed until the work is done later this year, Benton County officials said.

The county awarded the contract to repair the 109-year-old bridge to Crossland Heavy Construction. The contract included a final completion date of Sept. 30, but County Judge Barry Moehring said the work could be done sooner.

The War Eagle Bridge, built by the Illinois Steel Bridge Co. in 1907, is significant as one of six Parker through trusses in Arkansas. The bridge sits next to a reconstructed grist mill, which is the fourth in a series of mills on the same site dating to 1832.

"A lot depends on the weather and some of it depends on what they find once they get into it," Moehring said.

The bridge will be closed for the duration of the repair work, Moehring said. The county has restricted traffic on the bridge since 2013 by lowering the weight limit to 3 tons. The county spent about $640,000 on repairs to the bridge in 2010, but state inspectors found critical deficiencies during an annual inspection in 2013.

The county hired Great River Engineering of Springfield, Mo., to inspect the bridge and identify problems, then do design work and develop a scope of work to restore the bridge. The firm developed a three-tiered approach with each additional step including more repair to extend the life of the bridge.

Brenda Guenther, comptroller, says the county has $1.4 million in the budget for the work. The county has been awarded a $500,000 federal grant to reimburse some of the cost once the work is done under the Transportation Alternatives Program, a federal-aid program to construct sidewalks and trails for pedestrians, bicyclists and other non-motorized forms of transportation. The program also creates systems that will provide safe routes for non-motorists, including children, older adults and individuals with disabilities. The War Eagle Bridge project was one of 71 selected to receive $16 million from the program during 2015.

The bridge closing may inconvenience local residents, but shouldn't be a major problem, said Jenny Harmon, who lived in the area for 15 years before recently moving to Rogers. She was there when the bridge was closed for repairs for several months in 2010 and said a few adjustments to her routine were all the closing called for.

"I love the area and I love the old bridge, so I'm very happy they're going to keep it. I was there when it was closed before. It's somewhat of an inconvenience if you're coming into Rogers. You just work around it, maybe plan for a bit more time to drive. It wasn't a major problem for me," Harmon said.

Marc Trollinger, the county's fire marshal, said emergency response agencies have plans to deal with the bridge being closed, much of which they've already implemented with the weight restrictions in place.

"The only things that are allowed to cross it now are the smaller brush trucks and ambulances," Trollinger said.

The county's emergency dispatchers will be notified by email when the closing takes effect and ambulance coverage will be provided by the crews at the Hickory Creek Fire Station, Trollinger said. Firefighters from the Nob Hill department in Washington County and Hickory Creek in Benton County will be ready to aid Piney Point Fire Department volunteers who live in the area if they are needed, Trollinger said. Response times will remain essentially the same, he said.