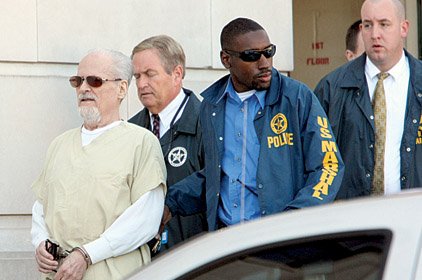 Tony Alamo (left) leaves the federal courthouse in Texarkana after the jury recessed for the day in this 2009 file photo.

Imprisoned evangelist Tony Alamo has died more than seven years after he was sentenced in federal court in Arkansas to a 175-year prison term, authorities said.

The Bureau of Prisons said the 82-year-old Alamo, whose real name was Bernie Lazar Hoffman, died Tuesday while in custody at the Federal Medical Center in Butner, N.C. Further details about his cause of death weren't immediately known, though Alamo was reported to have suffered from health problems, including diabetes and a 2011 heart attack.

Alamo was convicted in 2009 on 10 counts of taking young girls across state lines for sex. Some of them, as young as 8 years old, had been forced to become Alamo's "wives."

Alamo started a ministry in Los Angeles and later moved its headquarters to Arkansas.

Alamo, who was once known for designing elaborately decorated jackets for celebrities including Michael Jackson and Elvis Presley, started preaching along the California streets in the 1960s, advocating a mixture of virulent anti-Catholicism and apocalyptic rhetoric. He claimed God authorized polygamy, professed that gays were the tools of Satan, and believed girls were fit for marriage.

"Consent is puberty," Alamo told The Associated Press in September 2008, during the same weekend that state and federal agents raided the Tony Alamo Christian Ministries in the tiny southwest Arkansas town of Fouke in an investigation of child abuse and pornography.

Witnesses in the ensuing trial said Alamo made the decisions: who got married, what children were taught in school, who got clothes, who was allowed to eat. They said he began taking multiple wives in the early 1990s, including a 15-year-old girl in 1994, followed by increasingly younger girls.

Alamo was convicted after five women testified they were "married" to him in secret ceremonies at his compound when they were minors — including one when she was only 8 years old — and later taken to places outside Arkansas for sex.

Former followers said Alamo grew increasingly unhinged after his wife, Susan, died from cancer in 1982. Her body was kept in a room at the ministry, and his followers kept a vigil, praying for months for a resurrection.

Eventually her body was buried in a crypt on the ministry's 300-acre compound in northwest Arkansas. But in 1991, Alamo ordered his followers to pack up before federal marshals seized the property to satisfy a court judgment.

In addition to the criminal conviction, Alamo was found liable in a federal civil trial and ordered to pay $30 million to two men who were raised in the controversial Tony Alamo Christian Ministries.

A jury found that those two men were beaten, starved and denied education and found Alamo liable for conspiracy, outrage and battery.