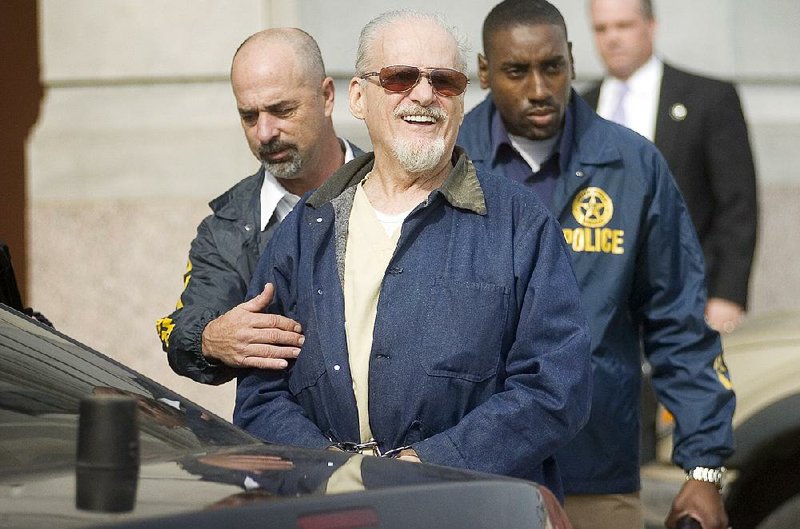 Tony Alamo, shown leaving the Texarkana courthouse after he was convicted in 2009, was born in Joplin, Mo. His parents named him Bernie Lazar Hoffman.

Alamo, whose real name was Bernie Lazar Hoffman, was sentenced to 175 years in prison in 2009 for transporting young girls across state lines to have sex. Some girls, as young as 8 years old, had been forced to become Alamo's "wives."

Alamo, 82, died at Federal Medical Center in Butner, N.C., according to an email from Justin Long, a spokesman for the Federal Bureau of Prisons. Long said his office couldn't reveal the cause of death.

At the time of Alamo's trial in 2009, witnesses testified that he suffered from diabetes and other age-related maladies.

Former Alamo followers claimed in federal court filings that they had been brainwashed, imprisoned, routinely beaten, starved as punishment for perceived wrongdoing, and forced to work long hours without pay -- often to make sequined denim jackets that were sold to Hollywood stars.

David Carter, a Texarkana lawyer who represented some of Alamo's former followers, said they are relieved after hearing of his death.

"The victims I've spoken with are feeling a new sense of freedom," Carter said. "A couple of them weren't even sure this day would come. They were raised to believe Tony Alamo was a prophet and that he spoke for God. In some cases, their own parents handed them over to Alamo rather than face eternal damnation for disobeying the 'prophet.'

"In the end, Alamo was nothing more than a narcissistic pedophile who wrapped his sadistic abuse in the cloak of religion."

Rebecca Gay, 42, who now lives in Georgia, spent the first 14 years of her life at the compound on Georgia Ridge, just north of Dyer. She posted a message Wednesday on Facebook about Alamo's death.

"Last night ... Tony Alamo the leader of the religious cult where I was born and raised, a man who was an annihilator of lives, the fracturer of families, and a thief of innocence took his last breath," wrote Gay. "It feels strange -- like someone cut the invisible tie that bound me for so long. I'm still processing. So many thoughts."

Dorothy Curry, 72, of Fort Smith, said she had mixed emotions.

"I don't rejoice, but I'm kind of glad," she said. "I don't want to celebrate somebody's death. I'm not jumping up and down. ... We were all hurt by that ministry -- spiritual abuse is what you call it. Some people have gotten over it and some haven't.

"Part of my testimony is that I was in a cult for 25 years. ... The cultish practice is the control, and we submitted to that."

Curry said her sister Ann, who's 82 and a former Alamo follower, was in a much more celebratory mood Wednesday.

Curry said she can't imagine anyone taking over as the leader of Tony Alamo Christian Ministries.

"I'm just rejoicing because his reign is over," she said. "You can't imaging anyone else taking over that ministry. His doctrine was ungodly. It wasn't the doctrine of Christ."

Tony Alamo was born Sept. 20, 1934, in Joplin, Mo. His father was a Jewish immigrant from Romania who, Alamo claimed, had been dance instructor for Rudolf Valentino, according to the Encyclopedia of Arkansas History and Culture.

When he was a teenager, Alamo moved to California and achieved some success as a "big band crooner" in Los Angeles.

Details of that part of Alamo's life are sketchy, according to the encyclopedia article.

Alamo claimed he recorded a hit record single in the early 1960s called "Little Yankee Girl" and was even asked to manage musical acts including the Beatles, the Doors, and the Rolling Stones. There is no evidence of those claims.

In 1966, after serving jail time on a weapons charge, Alamo married Edith Opal Horn of Alma. Horn, who was twice divorced, had moved to Hollywood to become an actress. Instead, she supported herself at least in part by scamming churches into believing she was a missionary in need of money, according to the encyclopedia article.

Some people said the couple changed their names to Tony and Susan Alamo after they married, though Tony Alamo claimed to have changed his name earlier.

While in a business meeting in Beverly Hills, Alamo claimed, Jesus came to him and told him to preach about Christ's second coming. He and Susan, who was also of Jewish descent, converted to Christianity and began a Hollywood street ministry, preaching particularly to drug addicts, alcoholics and prostitutes.

In the mid-1970s, they moved the ministry to western Arkansas, where Susan Alamo had grown up.

The group purchased land on Georgia Ridge and built a 13,064-square-foot mansion where the Alamos lived.

The Alamo group became well-known for running a variety of businesses in Alma, including the Alamo Restaurant, where several country music stars performed.

Tony Alamo thought of himself as a country-gospel singer. In former President Bill Clinton's 2005 autobiography, My Life, he described Tony Alamo as "Roy Orbison on speed."

Followers worked at the various businesses and gave the money to the ministry. In return, they were told their needs would be met, but that wasn't always the case, Curry said.

After Susan Alamo died of cancer in 1982, Tony Alamo kept her embalmed body in the mansion, telling his followers that she would rise from the dead. After about six months, he was finally persuaded to entomb her body in a mausoleum near their heart-shaped swimming pool.

In 1991, just before federal agents seized the property, the front of the mausoleum was smashed and Susan Alamo's body was spirited into the night as Tony Alamo and his followers abandoned the compound.

In 1998, the coffin and remains of Susan Alamo were dropped off one night outside a Van Buren funeral home after Christhiaon Coie, Susan Alamo's daughter, won a legal battle for the body.

In August 1998, Susan Alamo's remains were placed in a crypt in Memorial Park Cemetery in Tulsa, according to the Tulsa World.

In the 1990s, Tony Alamo did prison time for tax evasion. After being released in 1998, he set up the then-smaller Tony Alamo Ministries in Fouke in Miller County, with branches in Fort Smith and Los Angeles.

On Sept. 20, 2008, state and federal officials raided Alamo's Fouke compound as part of a two-year investigation into allegations of child abuse and child pornography.

Alamo was arrested in Flagstaff, Ariz., five days later on a warrant charging him with violating the Mann Act, a federal statute enacted to stop the trafficking of women or girls across state lines.

At his trial, several women testified that they had been sexually abused by Alamo, and some said they were forced to become his "wives."

In February 2014, a Miller County judge awarded $525 million in damages to seven former members of Tony Alamo Christian Ministries. It was the largest personal-injury judgment in Arkansas history.

"Susan died and Tony couldn't find himself," Curry said. "He didn't know how he was going to get along without her. She was the only one with any kind of anointing, any kind of spirituality."

Information for this article was contributed by Lynn LaRowe of the Texarkana Gazette. 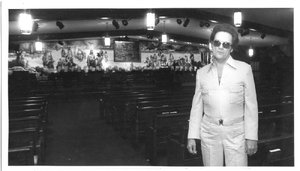 Photo by Jeff Mitchell
Tony Alamo stands in his church’s sanctuary in Alma in 1982. He and his wife were street preachers in Hollywood before moving to Northwest Arkansas.