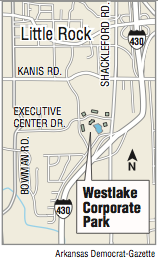 A map showing the location of Westlake Corporate Park

A Dallas-based real estate development and investment firm has completed a $45.8 million deal to acquire a six-building office park that has anchored the west Little Rock commercial landscape for 30 years, with an eye toward developing an untapped area of the park.

The sale closed Monday, Irwin said Wednesday. ISB of Little Rock purchased the park, formerly known as the Koger Center, in 1999 for $30.4 million.

The office park contains an additional 10 acres of undeveloped land, which is bordered by Center View and Peach Tree drives.

"The timing is right," Irwin said. "We held it for [18] years. We just thought the partnership was ready to make a change."

The property was the only real-estate holding for ISB, which has no plans to make further real-estate investments, he said.

For Silver Tree, which was formed in 1995, the acquisition is the firm's first foray into the Little Rock market. Until now, its focus has been the Dallas metropolitan area, where it has amassed "a diverse portfolio of mixed-use, retail, office and industrial developments located in some of the area's most affluent and fastest growing communities," according to the Silver Tree Partners website.

Brett Williams, a principal in Silver Tree, said in an interview Wednesday that he was thrilled with the acquisition of Westlake.

"We're excited for the opportunity to acquire a tremendous asset in central Arkansas," he said.

Williams said ISB "has done a great job in maintaining the property" over its 18 years of ownership and will continue to run it on behalf of Silver Tree.

"The 10 acres has some unique qualities to be developed," Williams said.

The complex was originally developed by Koger Properties Inc. of Jacksonville, Fla., between 1983 and 1989. Centoff Realty, a subsidiary of J.P. Morgan Investments, helped finance the construction of Koger's office parks in Little Rock, Nashville, Tenn., and Columbia, S.C.

By 1991, Koger was struggling and turned the properties over to Centoff for a $100 million reduction in the debt Koger owed Centoff. Koger continued to manage the property for J.P. Morgan.

An investment fund managed by J.P. Morgan began looking to sell the property in October 1998. The purchase by ISB was announced five months later, in March 1999. The announcement included renaming the property Westlake.