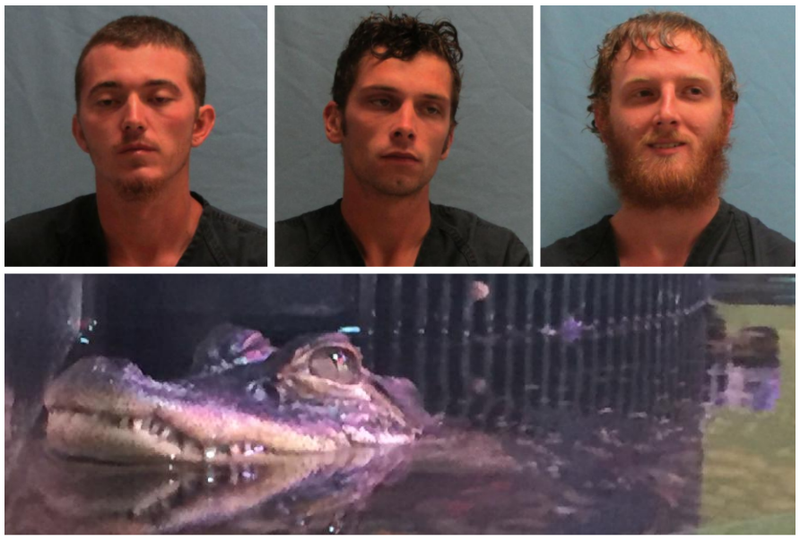 Clockwise from top left: Kevin Patrick, Samuel Cooper, Landon Williamson and a 4-year-old alligator that went missing after a break-in at the Witt Stephens Nature Center in downtown Little Rock. The gator was later returned.

Three men have been arrested in the break-in, which was reported around 11:45 p.m. at 602 President Clinton Ave.

Samuel Cooper, 23, of Benton; Landon Williamson, 24, of Bryant; and Kevin Patrick, 24, of Little Rock face charges of commercial burglary, theft of property and first-degree criminal mischief. Cooper faces an additional count of fleeing, according to reports.

By Thursday afternoon, the 4-year-old gator was back in its tank, comfortably outfitted with a pebble floor, a wooden log, rocks and shallow water. The tank sits near the entrance to the center, which is operated by the Arkansas Game and Fish Commission.

The reptile is unnamed and goes by "American Alligator," an employee said. Its kind is native to the South and can grow to more than 10 feet long in the wild.

In a news release Thursday, the Game and Fish Commission said the 3-foot gator had been located. The Little Rock Police Department tweeted that officers found the creature under a seat in the suspects' vehicle.

"Not something you see every day," the tweet said.

Police say officers arrived at the center late Wednesday to find that an aquarium containing two turtles had been pushed over. The tank was shattered, and water covered the floor.

Three employees with the Game and Fish Commission told officers that an "alive alligator" had been stolen.

Also at the center, authorities found a shattered large glass case that appeared to have held a shotgun. The gun had been removed, officers noted.

Two men, later identified as Cooper and Patrick, were seen as officers walked into the nature center through a shattered front door, a police report states.

Patrick complied with an officer's order to get on the ground, police said. But Cooper, who was holding the stolen shotgun, fled, according to reports.

After a foot chase, officers arrested Cooper and another person with him, Williamson, as the two reached a silver 2004 Nissan Maxima that was registered to Patrick, police said.

Cooper dropped the shotgun as he fled, according to the report.

Cooper, Williamson and Patrick were in the Pulaski County jail as of Thursday afternoon, according to an online inmate roster.

The center said its exhibit hall will be closed until further notice as it repairs thousands of dollars in damage to educational exhibits and fixtures.

Information for this article was contributed by Emma Pettit of Arkansas Online.