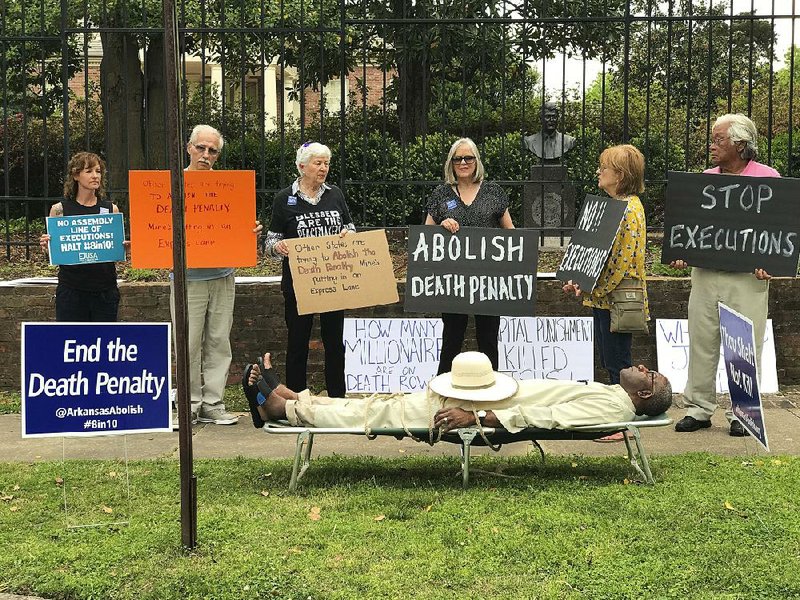 Pulaski County Circuit Judge Wendell Griffen, shown protesting at the Governor’s Mansion in April, said on his blog that he was portraying a crucified Jesus and that his hat covered “a black leather bound King James Version of the Bible, the book that my parents taught me to read and love as a child.”

LITTLE ROCK — An Arkansas judge is asking a disciplinary panel to dismiss a complaint concerning his participation in an anti-death penalty demonstration the same day he blocked executions.

Pulaski County Circuit Judge Wendell Griffen is calling the investigation an effort to punish him for exercising his First Amendment rights. In a filing Friday he said that the demonstration didn't violate any judicial rules and was constitutionally protected.

Griffen was photographed lying down on a cot outside the governor's mansion after he blocked Arkansas from using a lethal injection drug over claims that the state misled a medical supply company.

Griffen has said he was portraying Jesus and participating in a prayer vigil. Photographs showed the judge wearing an anti-death penalty button and surrounded by people holding signs opposing last month's executions.