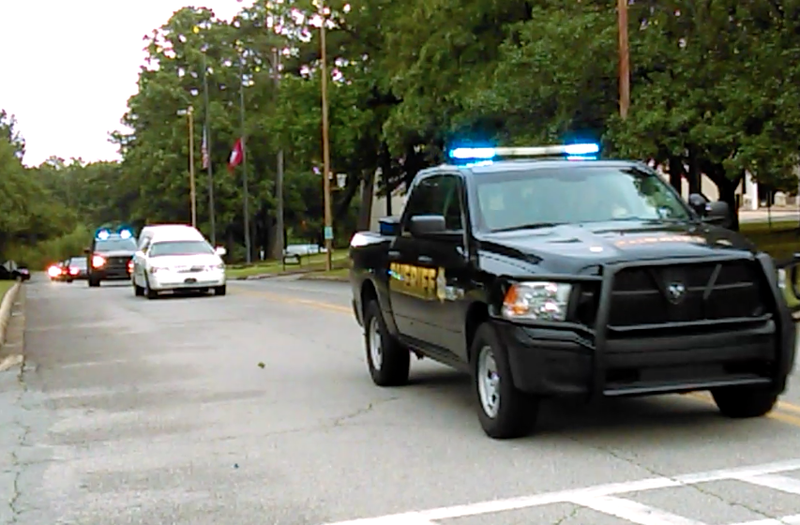 Authorities have identified two victims found Thursday outside a Yell County residence in a triple homicide that also left a sheriff's deputy dead.

The bodies of Rita Miller, 61, and Ciera Miller, 17, both of Yell County, were discovered as police responded to a disturbance call at a residence in the 12000 block of Gum Springs Road, Arkansas State Police said in a news release Friday.

Their bodies were outside the home for about five hours as 42-year-old James Arthur Bowden of Dardanelle held another person, 31-year-old Haley McHam of Yell County, inside during a standoff with authorities, according to the agency.

McHam was not reported hurt. She was taken in for questioning Thursday afternoon, the Arkansas Democrat-Gazette previously reported.

Mainhart, a 25-year-veteran in law enforcement, had initiated a traffic stop on Bowden's vehicle along Arkansas 27 near Slo Fork Road after connecting his vehicle to the disturbance call. While at that location, the sheriff's deputy was reportedly fatally shot by Bowden.

The bodies of Rita Miller and Ciera Miller were found later in the day at the Gum Springs Road address.

Check back with Arkansas Online for updates and read Saturday's Arkansas Democrat-Gazette for full details.

The sister of a man accused of killing a sheriff's deputy and two other people in rural Arkansas says she spoke to him by phone while he held a woman hostage during a five-hour standoff with law enforcement.

Julie Inmon told The Associated Press on Friday that her brother, James Arthur Bowden, has a history of mental illness. Doctors and authorities have not confirmed that.

State Police say the 42-year-old Bowden was jailed Thursday in the slayings near Dardanelle, about 65 miles (105 kilometers) west of Little Rock.

Police say Bowden released his hostage about 30 minutes before he surrendered.

Inmon says her brother told her he killed two of his girlfriend's relatives. Authorities have not identified those people.

The man accused of killing three people, including a sheriff’s deputy, early Thursday will appear in court in a little less than two weeks, officials said.

James Bowden, 42, of Dardanelle will appear in court at the circuit courthouse in Dardanelle on May 25, Conway County jail administrator Shane West said. Bowden is currently being held at the Conway County facility, he said.

West spoke with the prosecuting attorney Friday morning and settled on the May 25 date, though it's subject to change in the coming days, he said.

Bowden was arrested Thursday afternoon in Yell County in the fatal shooting of Lt. Kevin Mainhart as well as the deaths of two other unidentified victims.

Mainhart was killed during a traffic stop in which the deputy pulled over a vehicle that was connected to a disturbance call at a home on Gum Springs Road. Mainhart was fatally shot, and a passerby phoned for help, police said.

"Lieutenant Mainhart’s 25-year career in law enforcement in West Memphis and Yell County made Arkansas a safer place. Our thoughts, prayers and gratitude are with the Mainhart family and all those who put their own lives in danger to serve and protect,” the statement said.

The governor ordered the state flag to be lowered to half-staff as a tribute to Mainhart. The proclamation referenced Mainhart's history as a law enforcement officer in Arkansas as well as his service as a security forces officer in the U.S. Air Force.

His "bravery and dedication to duty was clear and did not falter even at the risk of death," the proclamation reads.

The flag will be flown at half-staff from Friday until the day of internment, the document says.

A long line of law enforcement vehicles on Friday escorted a hearse carrying Mainhart's body from the Arkansas state Crime Laboratory back to Yell County.

Authorities have named the man accused of fatally shooting a sheriff's deputy and killing two others before he was taken into custody after a standoff that lasted more than five hours Thursday in Yell County.

James Arthur Bowden, 42, of Dardanelle, was arrested at 2:40 p.m. at a Gum Springs Road residence in Yell County, west of Dardanelle, according to a news release issued early Friday morning by Arkansas State Police.

Bowden is being held in the deaths of Yell County sheriff's office deputy Lt. Kevin Mainhart as well as the deaths of two females, including one who is believed to be a child, police said.

Police released a name of the suspect Thursday, but it became clear later in the day it may not have been correct.

At 7:18 a.m. Thursday, Mainhart performed a traffic stop on a vehicle that was related to a disturbance call at a home on Gum Springs Road, police said.

During the traffic stop, Mainhart was fatally shot, police said. Authorities went to the Gum Springs Road home and discovered the bodies of the two other people, who have not been identified.

Bowden was arrested after a five-hour standoff with police in connection to all three homicides, state police said.

He is being held at the Conway County jail, said a detention center official.