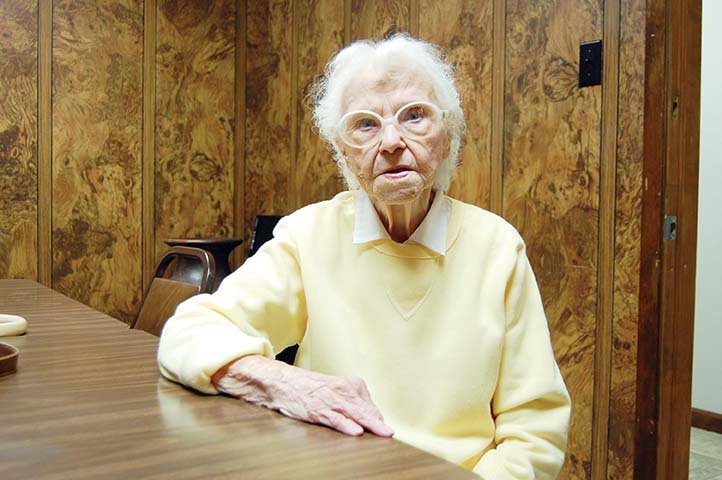 Pearl Trussell of Hot Springs turned 100 years old on March 9. The Bridge House in Hot Springs helped her celebrate the big day with a pink-themed party.

“Sometimes they help me, too,” said Jennie Peck, who sat in on the interview to help. “It is nice.”

“I have to have this (pointing to her cane),” Trussell said. “That makes them think I’m really sick, and I am not.

Trussell celebrated her birthday at the Bridge House of Hot Springs, where she has been a member for more than 30 years. The group decorated the party in pink, her favorite color.

According to a press release, the committee organized the luncheon and bridge game with a “pink theme, a pink cake, a pink corsage, pink roses on each table, and the bridge players wore shades of pink.”

“She is amazing,” said Teri LaBove, the director and bridge teacher at the house, “for her to be able to do what she does at her age.

“She is an inspiration to all of us other players.”

Trussell’s adopted son, Chuck Trussell, attended the party, as well as her nephew, Eric Wheatley, and his wife, Maurie.

Pearl Trussell, who has lived in Hot Springs her entire life, started playing bridge when she was in her 20s.

“Three other ladies and I decided we were going to play bridge,” Trussell said. “Of course, we all had children, and we all had kids around us.

“We would try to play, and they would crawl over us and cry. Or we had to change this one or another.

“But we enjoyed it.”

She said that went on for a while, but then four other ladies wanted to join.

“Months later, here comes four more people,” she said. “It got so big that we had to go to people’s homes, and that was fine.

“They give us a little something to eat, and it just continued to grow.”

Trussell said that eventually, the group had to move to a bigger location.

“There was a place that had food, and they had a big room by the side of them, and they said we could use that room if we would buy the lunch meal,” Trussell said. “We had to buy all of our lunches there, but we could play bridge.”

Trussell said that around the same time, her husband died, and she had to go to work.

While working at J.C. Penney, Trussell said, she was young and had a lot of boyfriends.

“We would dance all night, and I would go to work the next day,” Trussell said. “During my lunch hour, I would go down and take a nap, and one of the girls would have to wake me up.

“I had a wonderful time. I really did.”

She was eventually promoted to manager and would travel to other towns and help sell ladies’ clothes.

Later, a married couple opened Youth Casual, a dress shop at the mall, and “they didn’t really know anything about running it,” Trussell said.

“So they hired me as a manager to run it for them,” she said. “He traveled a lot, and she stayed here.

“I did that for a long time. Finally, I was up in years by then, and I got married again.”

Trussell said she has been married three times.

“I think three is enough for any woman,” Trussell said. “I am not real proud of that fact.”

She adopted Chuck when he was in his 30s after his dad, who was her third husband, died.

“One Sunday — he came up twice a year to see me — I asked him if he would like for me to adopt him, and he said, ‘Oh my heavens, yes,’” Trussell said.

She called a lawyer and paid $50 to officially adopt Chuck.

“There is nothing good about me,” Trussell said. “I am just plain ol’ Pearl.

“I just enjoy life, and I am a good Christian.”

Trussell attends Hot Springs Baptist Church, shops for her own groceries and goes to the library. She loves any book with a beautiful girl and a handsome guy on the cover.

“I just go down and get several books,” Trussell said. “I just pick up things that might be interesting.

“I enjoy fooling with ladies clothes and things because I like to wear them,” she said.

While Trussell is mostly independent, she does have trouble hearing.

“I can’t hear thunder. I really can’t,” she said. “Those [hearing aids] are so expensive.”

She said she has three of four of them, but none of them works properly.

Over the years, Trussell has worked in five or six retail shops, including a hat shop that once belonged to her father.

“Back then, everybody wanted a cowboy hat,” she said, “and they all wanted those good ones, so I went to town and bought a whole bunch of them.

“Those men would come in to buy them and then go to the races.”

She said it got so busy she had to hire two people to help her.

“But then, maybe two or three years later, all at once, it was dead,” Trussell said. “No man wanted a cowboy hat, so I sold [the shop] and got out when I could.”

She has traveled all over the world but really enjoyed a trip to Spain.

“I went with a group, and it was really easy,” she said. “They took us to all the tourist attractions, and it made for a very nice trip.”

Trussell retired when she was 40 but returned to her bridge game after not having played in a long time.

“When I retired, a lady friend asked me to join her, so I did, and I would play five days a week,” Trussell said. “It was just really nice, and I always enjoyed it.

The Bridge House where Trussell currently plays is in a shopping center at 300 W. St. Louis in Hot Springs. Trussell and Peck said one of their former members bought the place for the group after his wife died from Alzheimer’s disease.

“We were in the process of buying a place for the bridge club, and he said, ‘Well, I’m just going to buy it,’ and he did because he didn’t have anybody to leave the money to,” Trussell said.

Peck said the group had to move into their current location because the group got smaller and the rent got higher.

“We just pay for the upkeep, and it has been really nice,” Peck said.

Trussell said she doesn’t really know how she has lived so long but said it is important for people to remain active and keep their minds sharp.

“I never used dope, and I used to smoke, but I stopped that. I never did drink very much.”

Peck said Trussell eats well and cooks for herself.

“Her place is always nice and clean,” Peck said.

“I’ve had a good time, and I have worked hard,” Trussell said. “I really have had a nice life. I really have.”