Minnows and crappie fishing are an inseparable duo 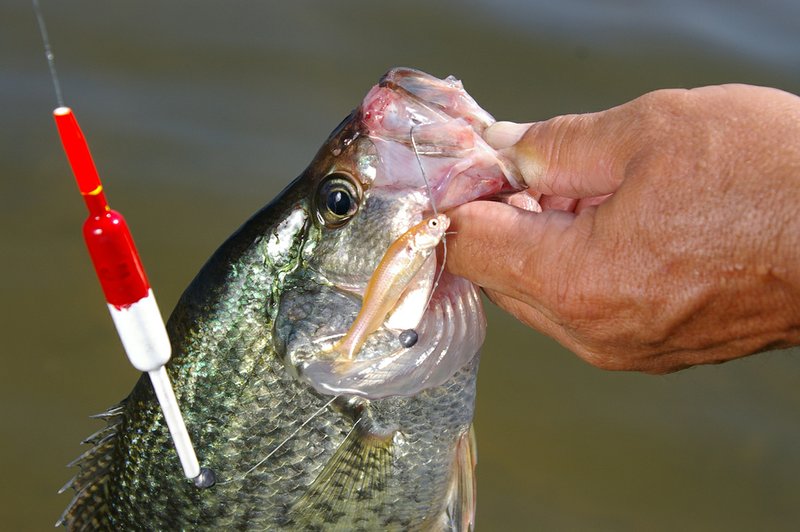 For many anglers, catching crappie is most enjoyable and productive when fishing a live minnow under a bobber.

Minnows and crappie fishing go together like stinkbaits and catfishing. Although adult crappie feed on other forage as well, small fish make up most of the crappies’ diet. And because minnows can be raised commercially and are available at bait shops throughout Arkansas and the U.S., they’re the bait of choice for many crappie anglers.

The species of minnows most used by crappie anglers are the golden shiner and fathead minnow, both produced by the tons on commercial fish farms. Arkansas leads the country in production, with some 6 billion minnows raised annually (61 percent of the U.S. total).

Farm-raised minnows aren’t the only baits used by crappie fishermen. Many anglers catch wild baitfish with traps or nets. In fact, according to some estimates, about half of all baitfish are still caught from the wild. Species often used by crappie anglers include the bluntnose minnow, blacknose dace, creek chub, hornyhead chub, common and red shiner, and mudminnow.

Sickly or dead minnows might work OK if you locate a school of super-aggressive crappie. Typically, however, sluggish, barely alive minnows won’t catch as many crappie as frisky, healthy baits. It’s important, therefore, to keep your minnows lively, something many crappie anglers find difficult to do.

One important consideration is the hardiness of the minnows you use. Fathead minnows are hardier than golden shiners, for example, being better able to withstand drastic changes in water temperature, low oxygen levels and rough handling. Golden shiners, on the other hand, are hardier than emerald shiners. If you have a choice, use the hardiest varieties.

It’s also important to use healthy minnows, which have vibrant colors, unblemished skin and fins, and tend to cluster in the holding tank. Diseased minnows usually are much darker than healthy ones, often have damaged skin and fins, and tend to school more loosely, with individuals often swimming listlessly near the surface. Confine your purchases to shops that keep their bait in good condition. Sick minnows will usually die before you reach your destination.

After obtaining minnows, you must do several things to keep them lively.

First, avoid extreme temperatures and sudden temperature changes. A bag or bucket full of minnows placed on ice may be full of belly-up bait in minutes. Dumping minnows into water that is significantly warmer or colder may also cause sudden death. Temper the fish by allowing their water to warm or cool gradually. Slowly add small amounts of water from your storage container or the body of water you’re fishing until the temperature regulates. Then keep the baitfish cool but not cold. A temperature between 50 and 65 degrees is usually optimum. High temperatures kill minnows as quickly as cold.

It’s also best to use unchlorinated water. This can be obtained from the water you’re fishing or from a well or rain water. If tap water must be added, let the water stand overnight so the chlorine evaporates, or add dechlorinating tablets or drops. Additives can also be mixed with the water to keep ammonia and other harmful byproducts at acceptable levels.

Keeping the water well oxygenated is also important, especially if you need to keep the bait more than a few hours. You can accomplish this by using products made to assist in this regard, including aerators, trolling buckets and special livewells and tanks.

Finally, avoid overcrowding minnows, another cause of stress and death. Generally, 1 gallon of water will support 12 to 24 small to medium minnows. Minnows are often graded and sold by size, so take this into consideration when you make your purchase.

My method for keeping minnows lively is as follows.

Second, I ask the bait seller to add oxygen to each bag. Most bait-shop operators can do this, and minnows will live much longer this way.

Third, I place the bags of minnows in a Coleman Xtreme cooler that keeps ice three days or more, even in 90-degree weather. Beforehand, I add a layer of crushed ice a couple inches thick to the bottom of the cooler, then cover the ice with a thick towel. The minnow bags are placed on top of the towel, the lid is shut and the temperature remains cool all day.

When I reach my fishing hole, I transfer the minnows and water from a bag into a Styrofoam minnow bucket. If I expect to be on the water all day, I sometimes use a small, battery-powered aerator to ensure that the minnows have adequate aeration. I keep the minnow bucket inside my cooler so the temperature remains optimum and open it to get a minnow from the bucket each time I need one.

Using this method, I’ve been able to keep minnows lively for several days.

A few basic principles should be observed when making minnow-fishing rigs. For example, it’s best to use a fine-wired, long-shanked hook that won’t injure the minnow as much as a heavier hook. Such a hook is also more easily removed from the crappie’s mouth. Several styles can be used, but Aberdeen hooks are traditional favorites. Pick a size that’s appropriate for the size of minnow being used: No. 6 to No. 4 for small minnows, No. 3 to No. 1 for medium minnows, and up to 1/0 or 2/0 when using big minnows for trophy-class slabs.

Care should be used in hooking the minnow so it remains lively and stays on the hook. The lip-hook method probably works best overall and is done simply by running the hook upward through the bottom lip and then the top lip. This method is used primarily when the minnow will be pulled through the water, either when trolling or using a cast/retrieve presentation. However, it works quite well for still fishing, too, even though most crappie anglers still prefer hooking the minnow through the back, just behind the dorsal fin, when using stationary presentations. “Eye-hooking” (running the hook through the upper portion of the eye sockets) is also common but is more likely to kill the minnow.

When you’re all rigged up, all that’s left is the catching. Drop your minnow beside crappie cover, and watch your bobber until you see the fish’s subtle bite. Set the hook, reel ’em in, and you’re on your way to a delicious meal of fried crappie! Good luck.