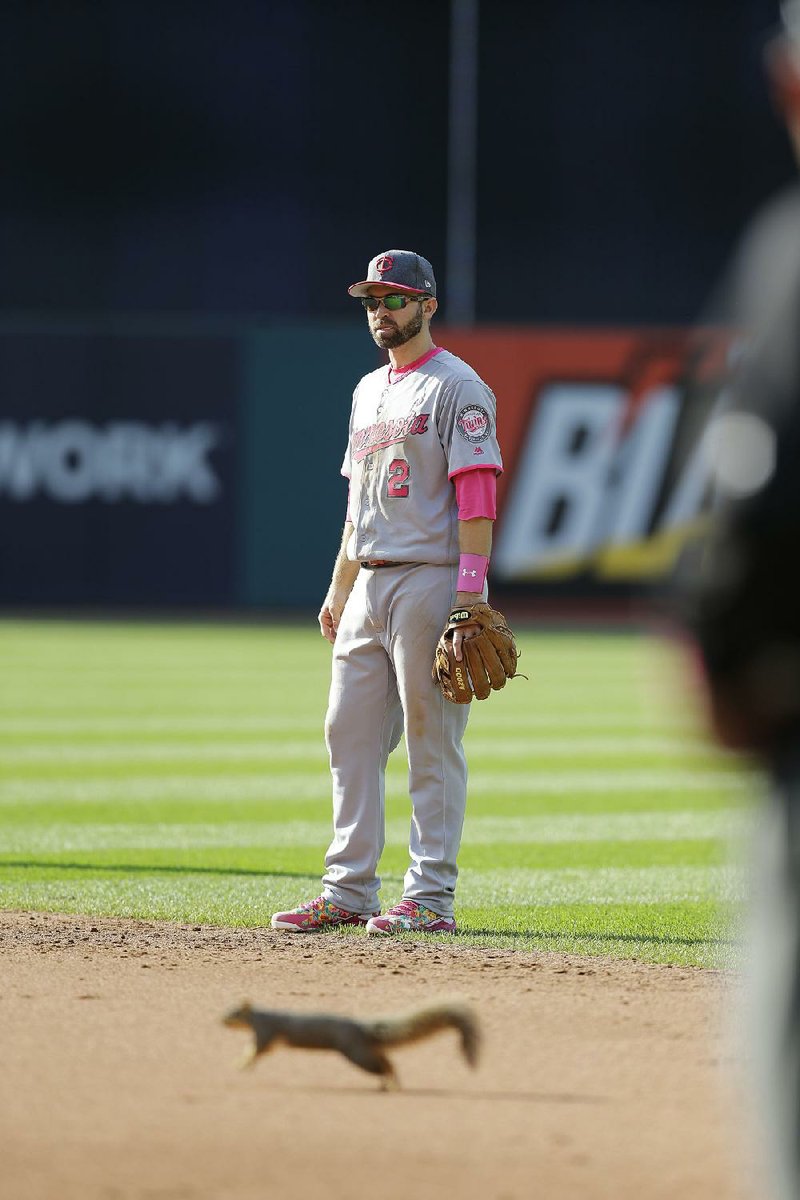 Weather is normally the most common reason for delaying baseball games.

Unlike football or golf, baseball is not meant to be played during the rain. But Saturday night at Progressive Field in Cleveland in a game between the Indians and Minnesota Twins, the game was delayed for reasons not related to the weather.

That's because a squirrel ran on the field during the sixth inning.

The squirrel raced in from right field and reached the area around the pitcher's mound, forcing the umpires to halt play. The squirrel ran into foul ground and headed behind home plate, but quickly returned to fair territory.

Several members of the grounds crew chased the squirrel, which was cheered by the Progressive Field crowd, down the right-field line before it finally hopped into the stands, allowing play to continue.

The squirrel's presence didn't help the Indians. The inning ended when Michael Brantley flied out on the second pitch following the delay and the Indians lost 4-1 to the Twins.

Unlike the 2011 St. Louis Cardinals, who adopted the "rally squirrel" as a mascot after a squirrel ran on the field during a 5-3 victory in Game 4 of the National League division series against Philadelphia Phillies and became a rallying cry during their run to the World Series, it looks like the Indians are not going to be doing that.

No ticket, no admittance

Ronnie Wickers, 75, is a long-time Chicago Cubs fan and shows up for almost every home game at Wrigley Field in the bleachers and does his signature cheer, "Cubs, woo. Cubs woo."

However, the Cubs were not in the mood of cutting their loyal fan some slack.

On April 19, he said he was targeted by Cubs security and kicked out of the bleachers. The reason, according to the Cubs, Wickers didn't have a ticket.

"They said they have an order from their supervisor that each time I come to the ballgame they have to see my ticket," Wicker said.

"I came through these bleacher gates, I scanned, came in with a with a friend of mine. It was on a scan ticket, you know."

Janet Tabit, a friend of Wicker's said, "I was called over and I wanted to know why, I said, 'Has Ronnie done anything?'"

Wickers' friend says she was in the bleachers at the time.

The Cubs say Wickers tried to sneak into the game, and that's why they checked for his ticket.

"I did not try to sneak into the ballpark. I came in those gates like any other fan," Wickers said.

When asked for the ticket, Wickers' friend could not call it up on his smartphone, and the reportedly exchanged heated words with the Wrigley Field security staff. Both the friend and Wickers were escorted out.

Cubs spokesman Julian Green said, "He wasn't kicked out. If you don't have a ticket that's trespassing. If you refuse to show a ticket when asked and then curse out our staff, then that's a violation of our code of conduct -- and a direct invitation to exit the ballpark."

Wickers is still a fan and wants an apology.

But without a ticket, there's no admittance to the ballpark.