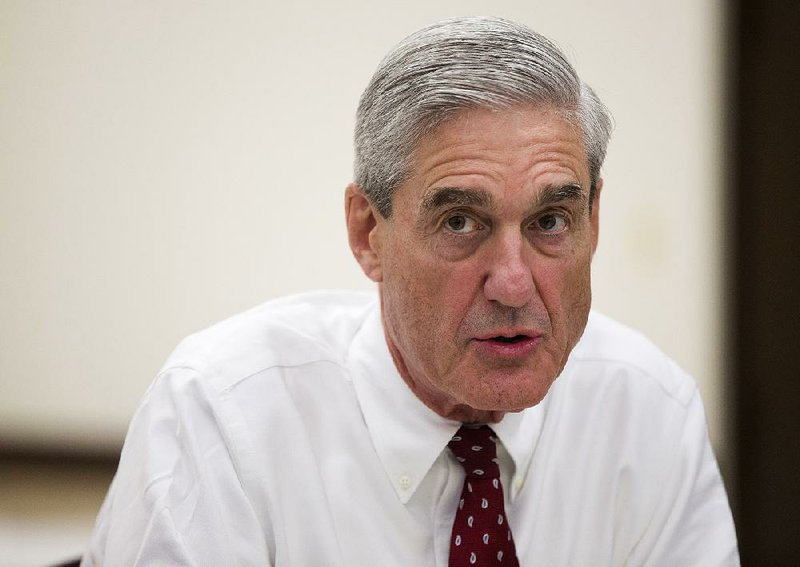 In this Aug. 21, 2013, file photo, then-FBI director Robert Mueller speaks during an interview at FBI headquarters in Washington.

WASHINGTON -- U.S. Sen. John Boozman said Thursday that he supports the decision to appoint a special counsel to investigate possible Russian interference in the 2016 presidential election.

U.S. Sen. Tom Cotton wouldn't say whether he agreed with the move.

While President Donald Trump has called the probe "the single greatest witch hunt of a politician in American history!" Boozman said it's important to find out what Moscow was up to.

"The Russians interfered in the election. I think we all know that they did that. The question is, was there any collusion with President Trump?" Boozman said in an interview. "I don't know that anybody has come to that conclusion, but, again, we just need to clear the air."

"Director Mueller is a person that is so widely respected by virtually everyone, and so the idea of him coming in and investigating, getting to the bottom of all this, getting to the truth, is really what it's all about," Boozman said. "He's perfect, very, very capable, in doing that."

Asked whether he agreed with the decision to appoint a special counsel, Cotton said, "I don't want to comment."

But Cotton complimented the man who will be leading the probe.

"Whether you believe a special counsel was warranted or not, Bob Mueller has broad respect across the partisan spectrum and I certainly respect the service that he's rendered to his country in many different capacities: as FBI director, as a U.S. attorney, as a Marine in Vietnam," he said.

The Republican from Dardanelle, Ark., declined to say whether he believes Trump is the victim of a witch hunt but said the special counsel's review should be expeditious.

"It's important that Mr. Mueller completes his investigation thoroughly and quickly," Cotton said.

On Arkansas' U.S. House side, U.S. Rep. Steve Womack predicted Mueller would get the job done.

"I think he'll be credible in his approach and thorough and he'll give the American people what they need and deserve right now and that is the absolute truth," the Republican from Rogers said.

Asked whether Trump was the victim of a witch hunt, Womack said, "I think there's been an attempt to discredit the president since the day he was elected."

Now that there's a special prosecutor, "the president will have an opportunity to prove the claims that he's made," he added.

Womack said the controversy is a distraction and is shifting attention away from major policy issues.

"We need to get past a lot of this noise because we've got a big agenda stacked up in front of us. We need to get to the business of the people," he said.

U.S. Rep. Bruce Westerman said Mueller's appointment is "part of the process. ... I don't see that as a bad thing."

The Republican from Hot Springs said Mueller has a good reputation.

"It sounds like he's a good guy that's a straight shooter," he said.

In an email, U.S. Rep. Rick Crawford called Mueller "the right man for the job."

"As a former FBI Director of 12 years with a strong track record of independence, Robert Mueller is fully equipped to perform a credible investigation," the Republican from Jonesboro said.

U.S. Rep. French Hill couldn't be reached for comment Thursday. But in an interview with radio station KARN-FM, 102.9, the Republican from Little Rock called Mueller "a fine man with an excellent reputation."

"If that's the direction [the Department of Justice] wants to go, I think he will do an excellent job," Hill said.