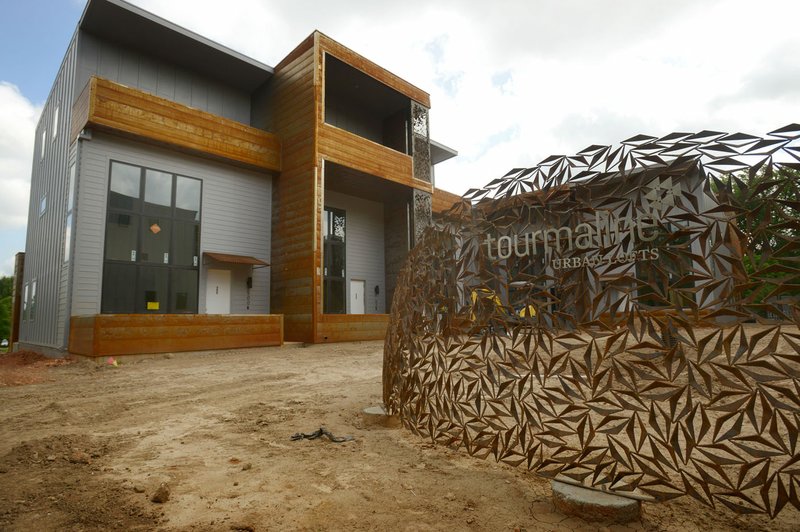 BENTONVILLE -- The development of the 8th Street Market and Crystal Bridges Museum of American Art's plans for the former Kraft plant have sparked private development interest in the Market District faster than city officials anticipated.

The development spans business, entertainment and residential purposes to create a similar atmosphere that's happened in the downtown core.

"At the end of the day, we're trying to create great neighborhoods where people want to live, where they want to work and where they want to spend their free time," said Troy Galloway, community and economic development director.

The Market District was one of two experience districts identified in the SE Downtown Area Plan the city adopted in 2014. Bentonville Brewing Co. and Blu Fresh Fish Marketplace were the first two businesses to set up in the district in 2015.

Two years later, activity is picking up at 8th Street Market, which is a former Tyson plant in the center of the district.

Bentonville Baking Co. has moved to the old Ice House, which also serves as office space.

Residential development is coming online as the Tourmaline Urban Lofts are being sold as they near completion. Lamplighter Restoration plans to build townhomes in the Market District.

"We certainly had no idea that it would happen as rapidly or as intensely as it has so far," Galloway said. "We're certainly off to a great start."

Picture Real Estate Development, a San Diego real estate development company, was the first to announce a residential project in the district.

The company bought the land at 501 S.E. D St. in 2014, knowing the city had a vision for the Market District, said Emily Fierer, principal and chief executive officer.

"In our experience of cities, the repurposing of factories means the creation of something amazing. At the time, we had no idea what that 'amazing' was going to be, of course," she said. Plans for both plants hadn't been announced yet.

Six of the 2,000-square-foot lofts in the Tourmaline community will be move-in ready in June, while the remaining nine will be finished this fall, Fierer said. Homebuyers can make custom material selections for those nine.

"We are proud to be play a role in the renaissance of this area," Fierer said. "We are excited to see who comes to live in Tourmaline and what sort of community forms among the residents and also between Tourmaline and the neighborhood around it."

"We can't wait to have a captive audience at Tourmaline," said Dana Hurst, bakery co-owner. "We're just going to waft that direction in the morning," she said, ushering the sweet smell of baked goods with her arms toward the lofts.

The bakery's location chose them since it already had a commercial kitchen, said Gwen Hilligrass, co-owner. Hilligrass said she was looking to expand her baking to the next level and needed more room and equipment.

It allowed them to get in a growing area of the city at ground level, the owners said.

"I think people are really starting to recognize that this is an up and coming neighborhood so they're kind of curious, they're interested," Hilligrass said, also commenting the 8th Street Market and art space in the former Kraft plant play a large role in that.

Crystal Bridges' goal is to open the contemporary arts venue at 507 S.E. E St. in 2019, according to Beth Bobbit, museum public relations manager.

"We are currently working on the plans for visual arts, music, theater, culinary and artist-in-residence programs, and there is a national search underway for executive leadership," she wrote in an email.

Galloway said the district will experience a lot more changes, especially after Eighth Street is widened.

He paralleled the district's prospective growth with the actual growth of the downtown square after Crystal Bridges was announced. It, too, happened much faster than anticipated, he said.

"Bentonville is a unique place," he said. "You never say never. It's been my experience that all things really are possible in Bentonville."