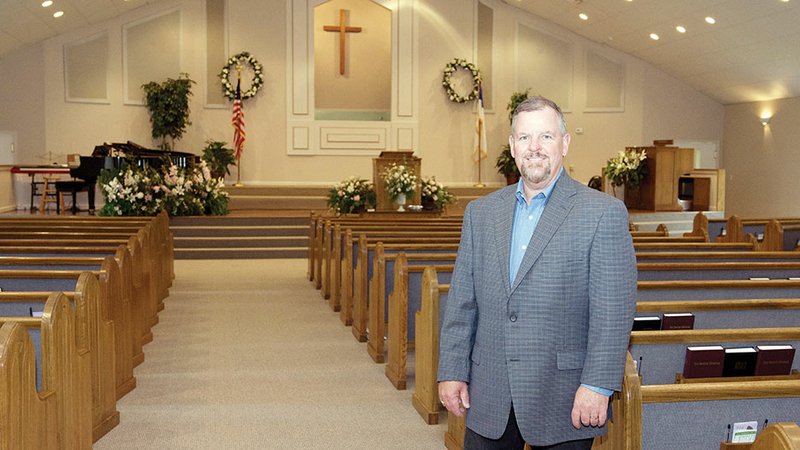 Marty Sikes, pastor of Bono Baptist Church near Greenbrier, stands in the sanctuary. The church will celebrate its 100th anniversary June 4 with dinner on the grounds following the worship services, and Sikes said a bell tower for a church bell that was recovered years ago after being stolen is being erected for the event.

BONO — In 1917, the small Faulkner County community of Bono was bustling.

It had a cotton gin and a general store and, nearby, a group of people gathered under a brush arbor for a church revival. That was the beginning of Bono Baptist Church.

Members and guests are invited to the 100th-anniversary celebration of the church, 414 Arkansas 285 N. at Burkett Flat Road, beginning at 10:30 a.m. June 4. The church is about 5 miles west of Greenbrier.

“He’s gold,” Sikes said. “He’s one of the finest preachers in Arkansas.”

A dinner on the grounds will follow. The catered catfish dinner costs $12 for adults and $6 for kids ages 6-12. Children 5 and younger may eat for free. People are asked to RSVP by calling (501) 679-0509 or emailing connect@bonobaptist.com.

Another special feature will be the reintroduction of the old bell, Sikes said.

“The bell was here as late as 1941, and we have a church member who remembers ringing the bell when he was a little boy, and he’s in his early 70s,” Sikes said.

The bell was stolen about 30 years ago, said Wanda Stanton, who has been a member of the church for almost 54 years.

“We got there one Sunday morning, and it was gone,” she said. The preacher rang the bell to announce Sunday School was starting, she said.

Sikes said police officers found the bell about 15 years ago, and it was stored in a man’s barn for safekeeping.

When church members started researching the anniversary, they saw the church bell in photos. Sikes said the man who stored the bell died in May 2016. Sikes called the man’s son, who still had the bell.

The Stantons plan to pay for the structure to hold the bell.

Tom Stanton has been a member of the church all his life, except for a few years when he and his wife lived in Mississippi. He said he remembers ringing the bell.

Sharon Burchfield, church clerk and Sunday School teacher, said it’s not known if the church members kept meeting in the arbor or in homes until the first building was constructed in 1923 about two blocks from its current location. The first pastor in 1917 was J.E. Claunch, she said.

The church evolved through the years. In 1990, the church was built on the corner where it is now. In 1996, the educational wing was built, and in 2001, a sanctuary was built.

“It is now all one building, built in three phases,” Burchfield said. “It is basically a horseshoe shape.”

Sikes said the church’s membership has ebbed and flowed during the years. At one time, it was almost 300. Sikes said when he became the pastor 5 1/2 years ago, the average attendance was in the 70s; on a recent Sunday, 124 were in attendance.

“In the church world, … a small church is 50 or less. Over half of the Southern Baptist Churches in Arkansas are 50 or less,” Sikes said.

The oldest member of the church is former pastor P.O. Harrington, 104, formerly of Greenbrier. He lives in a facility in Little Rock, said his nephew, Johnny Harrington, pastor of Sunny Gap Baptist Church. Johnny Harrington said he hopes to get a video of his uncle talking about his church memories.

“He did a beautiful job with it,” she said.

She said the church’s longevity is a testimony to the faithfulness of the congregation.

“One of the main things is, the numbers weren’t that great for so many years, the number of people attending and all. Everybody who was going was just faithful and didn’t want to see the church doors close,” Wanda Stanton said.

“Pastor Bill Kreis, in 1989, when he [arrived] — he wanted to build some sort of shelter so people wouldn’t get wet coming in and out of the old church. There were about five of us there. We said, ‘No, we want to build a new church.’ We figured he’d look at us and say, ‘These people are out of their minds,’ but he didn’t. He was ready to go,” Wanda Stanton said.

She said with a laugh that it was “like the baseball movie [Field of Dreams] — ‘Build it, and they will come.’”

Tom Stanton said the church can thank the late Reginald “Reg” Smith for its existence, too.

“He’s one of the reasons that we’re where we’re at today,” Tom Stanton said.

Smith was born in Bono, according to his obituary in 2011, and his father, Bryan Smith, donated land to build the 1923 Bono Baptist Church,

Then Reg Smith donated property when the church was built at its present-day location, just “down the street” from the first building.

Tom Stanton said Smith insisted. “He said, ‘You get it surveyed, and I’ll sign it. … You just mark off what you want.’”

Burchfield said she and her family have been members of the church for about 22 years. She and her husband, Ricky, have one son, Tyler. She said before she was married, she was living in Vilonia, but she planned to get married and move to Greenbrier. Wanda Stanton of Greenbrier invited Burchfield and her new husband to Bono Baptist Church. Burchfield said she called Stanton one morning to see what time church started, and it happened to be Stanton’s birthday.

“She said that was the best birthday present she ever got,” Burchfield said.

Burchfield said she looks forward to seeing former members of the church and having everyone get together to share memories.

“It’s so fantastic,” she said. “I was there for the 50-year [anniversary] and never thought about that [centennial] coming around in my lifetime.”