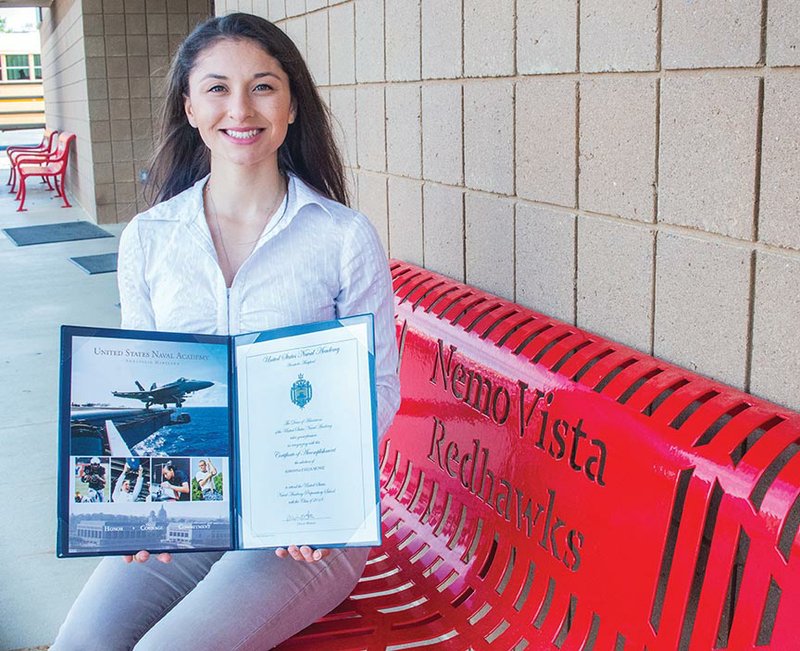 Recent Nemo Vista High School graduate Adrianna Munoz shows her acceptance letter to the U.S. Naval Academy Preparatory School. She is the first student from the local school to have been accepted into a military service academy. She graduated as one of three valedictorians on May 7.

CENTER RIDGE — Adrianna Munoz has made a name for herself at Nemo Vista High School.

Maryland, earn a four-year degree and a commission in either the Navy or the Marine Corps.

“I’m looking at the Marines right now,” she said.

“I want to be a pilot … a fighter pilot,” she said. “I want to fly. I want to be up there, but I am open to anything. The opportunities are endless.”

Munoz graduated May 7 with a 4.0 GPA and was one of three valedictorians at Nemo Vista High School. She is the daughter of Lynn and Mia Prince of Center Ridge and James and Amber Munoz of Las Vegas, New Mexico.

She is to report July 25 for the preparatory program that, according to the school’s website, is “to enhance midshipman candidates’ moral, mental and physical foundations to prepare them for success at the Naval Academy.”

“I’m sure there will be a little culture shock,” she said.

“The prep school is for kids like me who come from a small school or have a diverse background or are from out of the country.

“In my case, coming from a small school, they just want to make sure you’re up to speed with other students who might be coming from prep schools or larger high schools,” she said. “Going to the Naval Academy is up to par with getting an Ivy League education. Then you add in the military. … It’s an awesome opportunity.”

Munoz said the Naval Academy received 21,000 applications this year, and of those, 1,400 had direct appointments or nominations.

“Only 221 were accepted into the prep program,” she said. “I will need a nomination/appointment in

order to get into the Naval Academy. I have already been in contact with [U.S. Sen. John Boozman’s] office, so hopefully, there won’t be any problems with that.”

Munoz said she believes going to the Naval Academy is a calling.

“I’ve been around, traveled to a lot of different places and seen a lot of things,” she said. “My parents have exposed me to a lot of things, so I don’t think that aspect of attending a military academy is what drew me. I think of it as a true calling.

“I just can’t see myself doing anything else and being happy. I want to make the military my career. I can do that until I’m in my 40s, retire and start another career.”

Munoz said she applied to all five military service academies.

“I was accepted to the Naval Academy prep school on Nov. 15, which was extremely early,” she said.

“I had been to the Naval Academy’s summer seminar last summer and absolutely loved it,” she said. “I knew then that’s where I belonged. I told myself, ‘I know I will

graduate from this school.’

“I wanted to accept the Naval Academy prep school offer right away, but my mom said I should wait and sleep on it. I slept on it for about one night and then accepted. I did a video acceptance and sent it off on Nov. 16. I knew my heart was always set on the Navy.”

In addition to making good grades in school, Munoz was also active in sports and clubs. She played basketball and softball and competed in track and cross country.

She attended Girls State and was a member of the Student Council and Beta Club. She was elected state senior vice president at the Arkansas State Beta Convention in 2016 and went on to the national convention in New Orleans.

She is also a recipient of the Daughters of the American Revolution Good Citizens Award from the Gen. William E. Lewis DAR chapter in Morrilton.

Munoz has been active in the community as well. She helped the school establish a recycling club in partnership with Action Shredding and Recycling of Morrilton. She also participated in the Harvest of Hope food drive for the Conway County Care Center and joined with the Beta Club in donating items to a nursing home in Morrilton.

“I also spent a year working at the Center Ridge Volunteer Fire Department District 7,” she said. “I was a junior cadet. I went on calls with them, … carried a pager. … You go when you get a call.”

Munoz also worked part time at a convenience store in a nearby community.

“It was a gas/diner/grocery store. I flipped a lot of burgers,” she said.

“I also worked, reluctantly, sometimes, as a farm hand on our farm,” she said, smiling.

“I did whatever it took. The academy doesn’t accept just jocks or geeks. … They look at the whole person,” she said.

“I just wanted to be the best I could be,” she said.

“I am so appreciative of my parents and everyone at school who helped me. It took a lot of time and effort for them to fill out paperwork, to make sure I kept on track. I thank the community, as well, for its support. I could not have achieved this without everyone’s help. My parents, especially … they really are my backbone, my rock,” Munoz said.

“It would be hard to find a better student than Adrianna,” said Logan Williams, high school dean of students.

“This is the first time we have had a student accepted to a military academy. She is extremely hardworking and mature well beyond her years,” Williams said. “I can think of several times I have sat down and talked with her this year and thought, ‘This is an adult.’

“She is extremely driven. She set her mind on the Naval Academy and never looked back.”

“She is mature beyond her age,” Riedmueller said. “The other students look up to her because she is real. … She is just real in everything she does. She is intelligent and very caring. She will be a fantastic leader. I will look at her one day and say, ‘I’m proud to have known her. I am proud that she was my student.’

“Adrianna shows others that you are not capped by anything. … If you want something badly enough, you can get it. She has proven that. She knew what she wanted, and she went for it. She will do great things.”