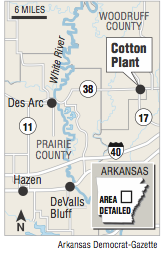 A map showing the location of Cotton Plant.

Someone is targeting Cotton Plant's police and firefighters, setting fires to their homes and vandalizing their vehicles since February, according to officials in the Woodruff County town.

The latest suspicious fire occurred Sunday and destroyed the Vine Street home that Fire Chief Jason Johnston recently bought for his mother after his father passed away. Debbie Johnston had yet to move into the home, but boxes of old photographs, memorabilia and papers were destroyed, the fire chief said.

"I was numb," Jason Johnston said of how he felt when he and other volunteer firefighters responded to the blaze. "I was hurt. When I saw it I thought, 'Here we go again.' I called for mutual aid to put the fire out. I was too sick to fight it myself."

In early February, fire destroyed the rental house of a female firefighter on Rush Street. Later that month, a second fire razed an abandoned house on McMurtry Street.

Each fire is being investigated as suspicious in origin, Johnston said.

On May 10, someone used gasoline to set a fire inside the Cotton Plant Police Department, Mayor Willard Ryland said. The building didn't burn, but the fire destroyed a computer on a metal desk and police investigation reports kept in a box.

He said fire investigators determined gasoline was used to set the fire.

"They were trying to destroy evidence," Ryland said. "We had an investigation going on a string of major burglaries."

The assistant fire chief discovered that someone had put a candy bar in his car's gas tank.

"It locked the engine up," Johnston said. "It rendered the vehicle useless."

"I am waiting for the experts to tell us what's going on," Ryland said.

The Fire Department has experienced turmoil the past few years. Ryland said he fired Johnston as the town's fire chief in 2016, but the City Council voted to reinstate him. When Johnston returned, some firefighters quit in protest, Ryland said.

"We need to put all that aside," Ryland said of Johnston's termination and reinstatement. "We need to move forward."

Johnston said talk in the town of 649 suggests a firefighter -- either currently at the department or a former member -- is setting the fires.

The fire chief took a polygraph test in an effort to prove he didn't set the fires after accusations began appearing on Facebook and other social media. He passed the test.

He asked his firefighters to take the polygraph tests, as well.

"They all passed," Johnston said. "I am 100 percent sure nobody on our Fire Department is doing this."

Because Cotton Plant is small, Johnston said, most residents know the firefighters and where they live.

"This is a small town," he said. "People are watching everything you do."

He said someone apparently knew when he bought his mother the Vine Street home after his father passed away with cancer. Debbie Johnston lived with her son and planned to move into the new home after renovations were completed.

The home was not insured.

"We lost a lot of mementos of Dad," Jason Johnston said.

"I feel the investigators will get to the bottom of this," he added. "When we go out on fires now, we treat every one like it was deliberately set."