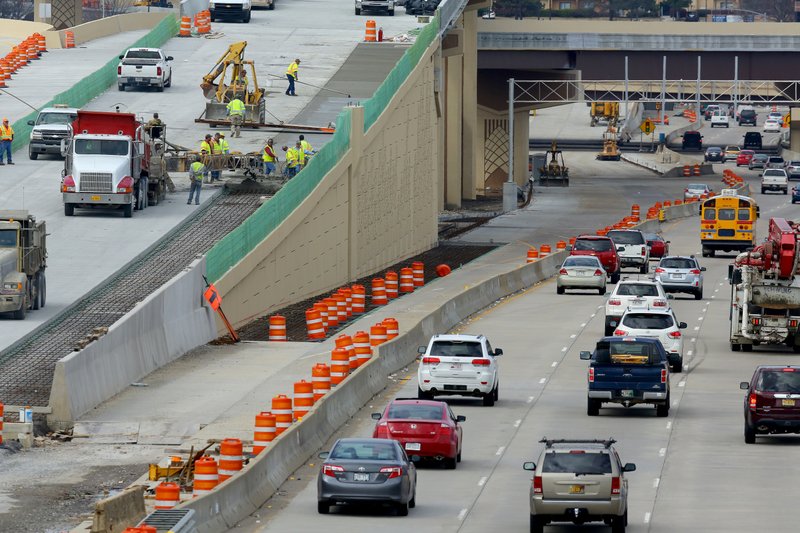 During this year's regular legislative session, state Rep. Dan Douglas, R-Bentonville, failed to get House approval to ask voters for a bond issue funded by a 6.5 percent sales tax on wholesale fuel prices and dedicated for highway maintenance. The statewide tax would have raised an estimated $200 million a year.

Two years ago, Douglas withdrew his bill to gradually transfer state general tax revenue from car-related items to highways that would have cost nearly $35 million in the initial year and $548 million once fully implemented.

"I think it is going to have to be a ballot initiative out there to get something in front of the public, and the public want better roads. They want their roads maintained. It's like the old Fram oil commercial: pay me now for an oil filter or pay me later for an overhaul," he said.

"When we start having bridges collapse and people killed, then we'll start funding highways," Douglas said.

House Speaker Jeremy Gillam, R-Judsonia, said that when "you start to have critical accidents and ... the bridge collapse scenario, then I think you're going to get people take it serious.

"Right now, everybody kind of gets to push this off and say, ... 'I just don't want to travel those roads very often,' so they rationalize it away," he said.

"I think as this mushrooms out where everybody's roads are starting to get really bad, you'll start to see a little bit more of a collective consciousness toward actually solving the problem.

"We give the Highway Department a lot of grief over a lot of issues. But we have set ourselves up for failure with the funding formulas they have [and] with the amount of highways we have to maintain. There is no way that you're going to be able to keep this course, so something is going to have to give."

Gillam said "no one" wanted to transfer state general revenue to the state Highway and Transportation Department two years ago because "it took away funding from other programs and things that they felt were too valuable."

"But at the same token, then they say, 'Well, we don't want to add any new money to it. We don't need any taxes. We don't want anything.'

"But yet then they turn right around and get after all the legislators, the senators and House members and then say, 'You've got to fix it.' But if you don't want to put any more money into it and you don't want to have any transfers, there is no way you're going to solve the problem."

Gillam's and Douglas' remarks come about a month after the state Highway Commission started to turn its attention to considering the option of raising more money for road construction though a proposed initiated act that would require voter approval.

Placing an initiated act on the November 2018 ballot would require the gathering of about 68,000 signatures of registered voters by early July of next year.

The Highway Commission is expected to discuss the idea further on June 7, said Craig Douglass, executive director of the Arkansas Good Roads Foundation.

Rep. Michelle Gray, R-Melbourne, said she talked with a political consultant in Tennessee, where the Legislature cut taxes, and approved gas and diesel tax increases.

"Because they offset each other, the general public was more amenable to it, so maybe in hindsight instead of just having the straight $50 million tax cut, we should have offset it with some sort of increase with gas taxes or something like that," she said.

She said the newly formed Tax Reform and Relief Legislative Task Force could consider that option as part of its deliberations in the next year and a half.

This year's Legislature passed Gov. Asa Hutchinson's plan to cut income tax rates for Arkansans with taxable incomes below $21,000, effective Jan. 1, 2019. That's projected by the state to reduce state general revenue by $25 million in fiscal 2019 and $50 million in fiscal 2020.

For more highway funds, Sen. David Wallace, R-Leachville, said "I would take this program and move it into our general fund.

"That would force all of our departments to cut across the board. No one likes that. It would be a lot of noise made. But I think it would work," he said.

Nearly a month ago, Hutchinson cut $70 million from the state's general revenue budget of $5.33 billion for fiscal 2017, which ends June 30. He cited lagging sales and corporate income tax collections as the reason.

Sen. Jeremy Hutchinson, R-Little Rock, said the Highway Commission is spending money based on a plan "that includes connectivity to rural areas.

"But there has to be a traffic count component, or we'll just continue to get further and further behind and our roads are going to deteriorate even greater and congestion will get greater and [hurt] the economic ability to grow, especially up in Northwest Arkansas where traffic is becoming a real inhibitor to recruiting," he said.

Sen. Larry Teague, D-Nashville, said the eight counties in his district have "roads that are coming apart."

"They are not being taken care of very well at all. I am on record as voting against highway revenue formula increases until such time we get some commitment to maintenance dollars in rural Arkansas," he said.

"It doesn't make sense to let the roads we have go to pieces with the money already spent on them. There are big holes in a lot of them. I ride a bicycle most days. Some days I dodge holes to avoid flipping over the handle bars."

Teague said he drives on Interstate 30 to Little Rock and back home a few times a week.

"It's just packed solid. We have got to have some kind of plan," he said.