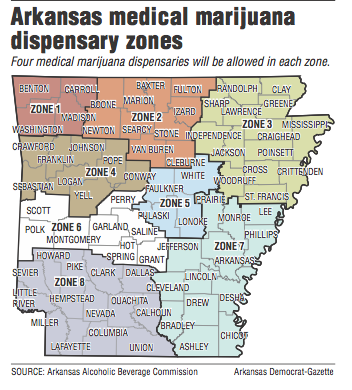 Some folks think it's only natural that the bohemian tourist town of Eureka Springs gets a medical marijuana dispensary.

Mayor Robert "Butch" Berry said he would like to have two, if not more.

"I would like to have four if we could get them," Berry said. "Eureka Springs was originally founded on the basis of its healing waters. ... Medical marijuana will dovetail perfectly into what has already been a place to come for rejuvenation and healing."

"There's a lot of difference between spring water and marijuana," said Cross, 82, chairman of the board of Cornerstone Bank in Eureka Springs.

While some people think a dispensary would help tourism in Eureka Springs, Cross thinks it might do the opposite.

Cross cited a May 17 Fox News report indicating that the legalization of marijuana (not just medical marijuana) in Colorado had turned Durango into "a haven for recreational pot users, drawing in transients, panhandlers and a large number of homeless drug addicts."

"People might stay away because it's become a marijuana-type city," Cross said of Eureka Springs' future. "A medicinal marijuana destination could pose a risk to our existing tourism business, and I don't want to take that risk."

"I've seen our mayor quoted that he hopes we're going to get two in Eureka," said Bell, who wants to get a dispensary for the town. "I quite honestly think that's very unlikely. If we get one, it's going to be amazing. ... There are four other groups in Eureka vying for this. There's probably 40 up and down the corridor."

The "corridor" refers to Interstate 49 and the larger cities along a stretch through Northwest Arkansas -- Fayetteville, Springdale, Rogers and Bentonville.

The state will take applications from July 1-Sept. 30.

Travis Story, a Fayetteville lawyer and member of the Arkansas Medical Marijuana Commission, drew up the map that shows the eight dispensary zones in the state, and it was approved by the commission.

Story said it's possible that one town could have more than one dispensary.

"You can do that," he said in an email. "If we get two applications from people in Eureka Springs, they could have two dispensaries in the same city."

The issue, Story said, is there can't be more than four dispensaries in any one county.

The Arkansas Medical Marijuana Amendment, now known as Amendment 98, received 53.11 percent of the popular vote during the November general election. The amendment will allow doctors to recommend the drug for patients suffering from specific medical conditions. Voters supported the amendment in 38 counties and opposed it in 37 counties.

Citizens can petition for a local option vote to ban dispensaries and cultivation facilities, but so far no residents appear to be proposing local option elections to ban medical marijuana facilities.

"It is a natural, safer medication," he told the City Council.

Bob Grudek, 74, of Eureka Springs, said he thinks medical marijuana might contribute to drug problems, rather than alleviate them, because doctors will write too many prescriptions for medicinal marijuana.

Grudek, who was sheriff of Carroll County from 2006-14, said medical marijuana will be a headache for law enforcement, which probably won't get additional funding to handle it.

Police can give Breathalyzer tests on the scene for drunken drivers, but there is no equivalent test to gauge marijuana intoxication, Grudek said.

"It would put a lot of pressure on the police officer," he said.

A total of 29 states, the District of Columbia, Guam and Puerto Rico have comprehensive medical marijuana programs, according to the National Conference of State Legislatures.

Recently approved efforts in 17 states allow use of "low THC, high cannabidiol" products for medical reasons in some situations or as a legal defense, according to ncsl.org. Those programs are not counted as comprehensive medical marijuana programs.

Randall Christy, president of The Great Passion Play near Eureka Springs, said his only experience with medical marijuana dispensaries was on a visit to Los Angeles. Christy said people claiming to be doctors would stop him on the sidewalk and offer to write him a prescription for medical marijuana, saying "surely you have some pain or fatigue."

"While I personally believe that if a person truly has a medical problem that cannabis will cure or help, a doctor should definitely be allowed to prescribe it," Christy said in an email. "I'm afraid some towns may allow the circus I described above. The 'medical marijuana' laws can so easily be abused.

"I would certainly be very disappointed if Eureka Springs allowed this beautiful city to be transformed into something like I witnessed that day in L.A."

The City Council is working on a resolution saying it supports the concept of a having a dispensary in Eureka Springs.