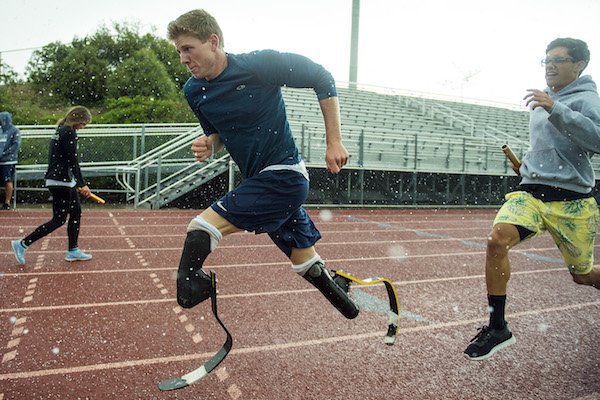 Senior Hunter Woodhall runs during a practice at Syracuse High School Wednesday, May 17, 2017.

FAYETTEVILLE -- The prosthetic legs sprinter Hunter Woodhall will run on for the Arkansas Razorbacks are made by a man who lives in Greenwood and works in Fort Smith.

Francois Van Der Watt, who has worked with the United States Paralympic team since 2008, began designing and building Woodhall's carbon-fiber legs in 2014.

Woodhall, from Syracuse, Utah, signed with the University of Arkansas, Fayetteville earlier this month and will be a freshman for the Razorbacks during the 2018 track and field season.

"It's great to have my legs hand-made in Arkansas," Woodhall said. "Having Francois so close by is a big deal and makes me feel more comfortable, because he's right here to make sure any problems get solved."

Woodhall hadn't been to Fayetteville until his recruiting trip, but he's visited Fort Smith several times to see Van Der Watt, whom he met at a meet in Minneapolis in 2013.

"The first time I saw Hunter run, I realized he can be a real track star," Van Der Watt said. "He's going to be the face of blade running in the United States.

"Running for Arkansas, he'll be on a national stage. If people aren't aware of him in the track world now, they will be soon."

Van Der Watt said the U.S. has been slower to recognize the potential of athletes with artificial limbs compared to some other countries.

"The rest of the world is a little more in tune with knowing what adaptive athletes are about," Van Der Watt said. "In the U.S., the coverage has been really slim. So Hunter's definitely going to be opening doors for others in the future."

Van Der Watt has his own company --Van Der Watt Prosthetics & Orthotics -- where he works with those who aren't involved in athletics as well as those competing at a high level such as Woodhall.

"I know I can trust Francois to make my equipment to the best of his ability," Woodhall said. "I'm running on it every day, and I have to make sure that it's as ready to go as I am."