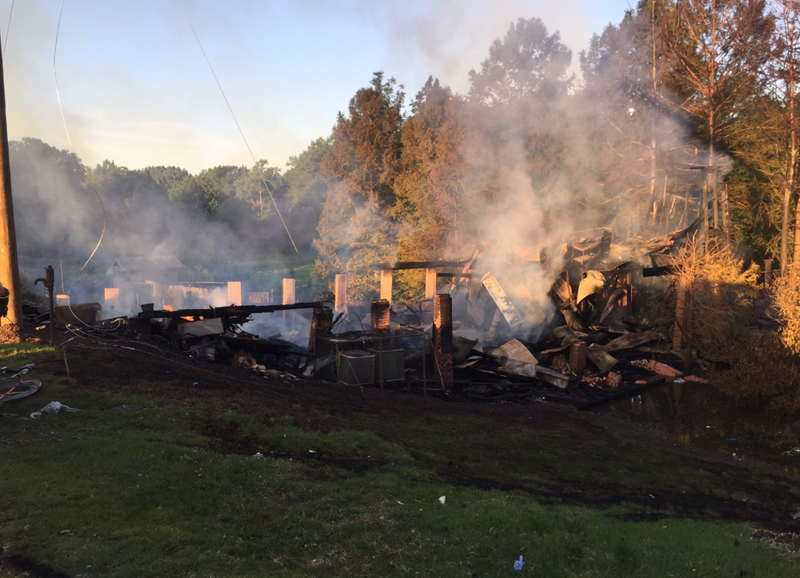 Cotham's Mercantile was destroyed in a fire early Tuesday.

A serviceman with Entergy arrived at Cotham's at 5301 Arkansas 161 South in Scott around 1:30 a.m., senior lineman Robert Love said at the scene Tuesday morning. That serviceman called Love and his crew, telling them the restaurant was on fire and appeared to be a “total loss.”

The structure caved in, and only charred pillars of brick were left standing along the perimeter by 7 a.m. Gray smoke billowed from the crumbled building and pieces of siding and tin broke off and dropped into the surrounding ditch. A pocket of fire still burned near the roadway as passing drivers slowed.

[PHOTOS: A look back at Cotham's Mercantile in Scott through the years]

Pockets of fire are still smoldering at Cotham's Mercantile Store in Scott, which burned down early Tuesday #ARnews pic.twitter.com/LP1NrD6X5K

Entergy techs are putting up a power line after a utility pole got scorched. About 275 people down 161 S currently w/o power. #ARnews pic.twitter.com/ASswjHs0wS

The cause of the fire wasn't immediately known.

Cotham's, which was built in 1917, had “a ton of memorabilia, basically anything old” inside, Love said. The location originally served as a mercantile store in Scott for local farmers as well as a “military commissary and a lockup for local law violators awaiting trial by a circuit-riding judge,” according to the business’ website. A small eating area opened inside the store in 1984, the website said, and from there, popularity ensued.

Bill Clinton and David Pryor at times frequented the restaurant, which became known for its massive hubcap burgers. That dish was the focus of an appearance the eatery made on the television show Man vs. Food.

“It was a pretty neat place,” Love said as he watched his partner from the base of a service truck. “Real good food, real good service.”

Fire officials were putting out the fire when Love got to the scene, around 3:30 a.m., he said. None were at the scene as of 7 a.m.

The flames had scorched a nearby utility pole, causing a power line to go down, which left about 275 people along the highway without power, Love said. He expected crews to finish mending the line within a couple of hours.