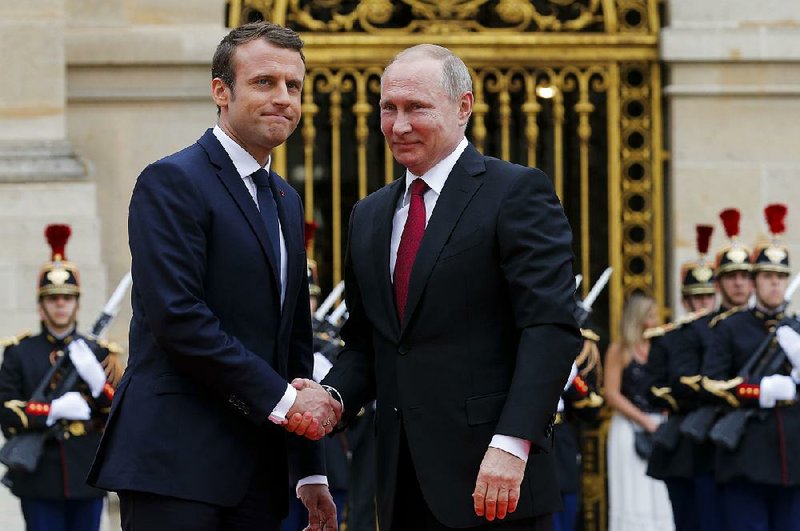 PARIS -- French President Emmanuel Macron said he and Vladimir Putin held "extremely frank" talks Monday, in which he criticized the use of chemical weapons by Syria's Russian-backed government and blasted Russia's state-run news media as "organs of influence and propaganda."

Macron had invited the Russian leader to France to reset a relationship that has turned increasingly sour. Putin, during France's recent presidential election, met with Macron's far-right opponent during the campaign.

The meeting between the two leaders came just days after Macron made his mark on the world stage, welcoming President Donald Trump with an aggressive handshake that the French leader later said was intended to show that he wouldn't "make small concessions."

Macron, 39, who won the May 17 election in a landslide, said he and Putin had "extremely frank" talks but emphasized that Russia and France could work together on issues like terrorism.

Putin said Macron proposed a framework for French and Russian anti-terror experts to meet and work together. And both leaders agreed they don't want Syria -- where Russia is propping up the government of President Bashar Assad -- to collapse into a failed state.

Progress in Syria "will happen by a joint effort, which today we laid the foundations for," Macron said.

Speaking through a translator, Putin said the two countries were "totally capable of trying to progress together" on world affairs.

"What unites us allows us to hope that the possibility exists to improve our ties," he later added.

As the French election neared, Putin expressly backed Macron's opponent, Marine Le Pen, the leader of the staunchly anti-immigrant National Front. On the eve of the vote, Macron's campaign suffered a cyberattack that it compared to the hacking of candidate Hillary Clinton's presidential campaign last year. U.S. intelligence agencies have blamed that operation on the Russian government.

Cybersecurity analysts quickly detected Russian fingerprints behind the hacking of the Macron campaign's emails and internal communications earlier this month.

The Kremlin has denied involvement, and Putin on Monday reiterated that Russia never meddled in the French election. He did, however, defend his decision to receive the pro-Russia Le Pen in Moscow in late March, a month before the first vote in the two-round French election.

Putin told reporters that Macron had not broached the subject of the cyberattacks in their talks Monday.

"We are quite capable of trying to move forward together in terms of the so-called Russian interference in the elections," Putin told a news conference, in response to a question.

"The issue has not been raised. The French president did not show any interest, and I even less."

But Macron did comment on the topic when asked by a Russian journalist why it had been so difficult for certain reporters to get access to his campaign headquarters during the election.

"I have always had an exemplary relationship with foreign journalists, but they have to be journalists. Russia Today and Sputnik were organs of influence and propaganda that spread counterfeit truths about me," he replied, referring to the Russian TV network and news agency.

Both media outlets are controlled by the Russian government.

Russia Today's editor-in-chief, Margarita Simonyan, responded by saying, "It is disappointing that what started as a rather productive conversation between the leaders of the two countries turned into another opportunity for President Macron to levy baseless accusations against RT."

She added, "By labeling any news reporting he disagrees with as fake news, President Macron sets a dangerous precedent that threatens both freedom of speech and journalism at large."

"It is not for me to comment on Madame Le Pen's visit" to Moscow, Macron said in response to another question about the vote. "Elections are the decisions of sovereign people."

The presidents' meeting at the 17th-century Palace of Versailles, one of Europe's most opulent royal palaces, came at a time when relations between Paris and Moscow have reached one of their lowest points in decades, largely because of the war in Syria.

France has been highly critical of Syrian President Bashar Assad, whom the Kremlin has backed for years.

Macron said Monday that the use of chemical weapons in Syria constituted a "red line" for France and "would result in reprisals and an immediate response, at least where France is concerned." Syria has been accused of using chemical weapons, including chlorine gas and much deadlier nerve agents, during the conflict.

Trump last month ordered a missile attack on a Syrian air base in response to a chemical attack in Idlib province that killed nearly 100 people.

Russia protested that the U.S. retaliation violated international law and said it would ruin bilateral relations.

President Barack Obama had also pledged strong action against Syria if it crossed a "red line" by using chemical weapons.

But a year later, in 2013, Obama was widely criticized for holding off on military action against Syria when he failed to get congressional approval for a strike in the wake of a chemical-weapons attack.

The U.S. government subsequently worked with Russia on a deal that was supposed to rid Syria of such weapons.

France and Russia are also divided over the Putin administration's support for pro-Russian rebels in eastern Ukraine and Russia's annexation of Crimea in 2014, which led to the imposition of sanctions by Europe and the United States.

Standing next to his Russian counterpart, France's new president also pledged to defend "all people, all minorities."

He explicitly mentioned workers employed at Western-backed nonprofit groups in Russia -- who are often tagged "foreign agents" by the Russian government -- and the reported abuse of gays by authorities in Chechnya.

"I will be constantly vigilant on these issues," Macron said.

On the subject of rights in Chechnya, Macron said he had discussed the reports with Putin and that they had agreed on a "very regular monitoring" of the situation.

Putin's visit to France was described as a working meeting timed to coincide with the opening of a show at the Grand Trianon, in the Versailles complex.

The exhibition celebrates the ties between Russia and France forged 300 years ago by Peter the Great when he visited France after encouraging diplomatic ties between the two countries.

Information for this article was contributed by James McAuley of The Washington Post; by Sylvie Corbet, John Leicester and Vladimir Isachenkov of The Associated Press; and by Alissa J. Rubin, Aurelien Breeden, Benoit Morenne, Ivan Nechepurenko and Oleg Matsnev of The New York Times.