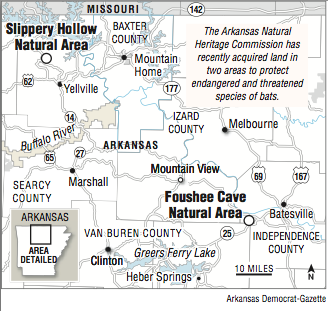 Over the past year, the Arkansas Natural Heritage Commission has acquired more than 500 acres in northern Arkansas to protect habitats for federally endangered and threatened species of bats.

"Bats are Arkansas' most endangered mammal, and they play an essential role in the natural environment: they eat thousands of insects every night and help pollinate flowers," according to a news release from the commission.

Ruth Berryhill, a spokesman for the commission, said money for the purchases came from The Conservation Fund, which has preserved more than 7.8 million acres in all 50 states.

In December, the commission bought 400 acres in Independence County for $419,000 from Gerald, James, Dennis and David Hall, and relevant spouses, according to real estate records.

That land was added to the Foushee Cave Natural Area, increasing its size to 3,123 acres.

The Foushee Cave Natural Area features deep, forested ravines along streams that provide excellent foraging habitat for the endangered gray and Indiana bats and threatened northern long-eared bat, according to the release.

This year, the commission made two land purchases totaling about 107 acres in Marion County with money from The Conservation Fund. Along with another recent acquisition, the size of Slippery Hollow Natural Area has increased to 1,420 acres.

According to real estate records, the Marion County acquisitions included 66.92 acres for $66,920 from Clifton Neil Wood and Alisha Wood of Yellville in February, and 40 acres for $45,080 from Samuel L. Jones and Bobbie J. Jones of Summit in September.

The Slippery Hollow cave system is one of three known sites that support the easternmost population of the federally endangered Ozark big-eared bat, according to the release.

The Marble Falls Cave, which is in the Slippery Hollow area, was the first confirmed site of northern long-eared bat fatalities because of white-nose syndrome in Arkansas, according to the release.

The disease is named for the white fungus that appears on hibernating bats. Over the past decade, it has spread rapidly and killed more than 5.7 million bats in eastern North America.

The commission is working with the U.S. Fish and Wildlife Service to investigate the source, spread and cause of bat deaths and find ways to minimize the impacts of the disease, according to the release.

The lands were conserved in part to address potential effects caused by the construction and maintenance of the Diamond Pipeline, a 20-inch line capable of transporting up to 200,000 barrels per day of domestic sweet crude oil from Cushing, Okla., to Memphis.

The pipeline is scheduled to be completed around Dec. 1, said Brad Leone, a spokesman for Plains All American Pipeline of Houston.

Diamond Pipeline LLC is a joint venture between Plains All American and San Antonio-based Valero.

The Conservation Fund works with Diamond Pipeline LLC and the U.S. Fish and Wildlife Service to conserve land and protect bat habitat, although it may be in a different but nearby area. The pipeline route goes through central Arkansas, south of both Marion and Independence counties.

The commission has 71 natural areas in Arkansas.

"Natural areas are special places that protect rare natural communities and provide vital habitat for a host of plant and animal species, some of which are considered to be rare, threatened or endangered," according to naturalheritage.com.