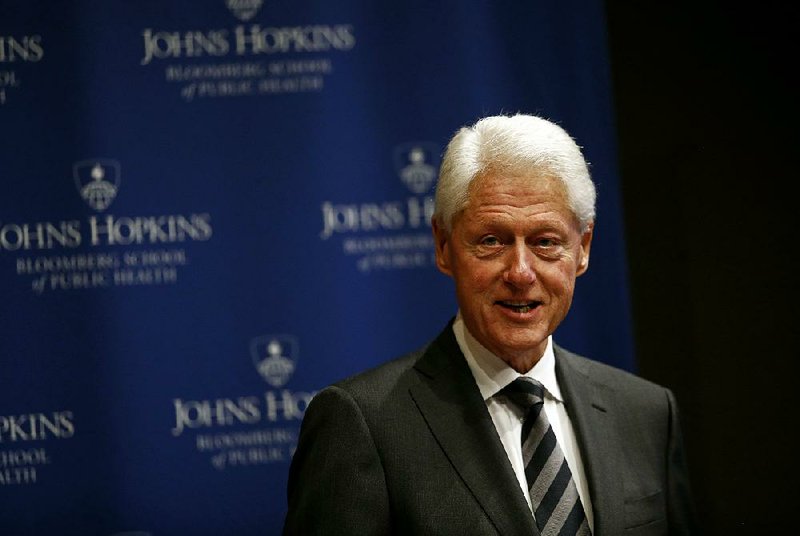 WASHINGTON -- Former President Bill Clinton and those who served on his 1992 campaign are gathering at Georgetown University this weekend to mark the 25th anniversary of his election.

Later this month, Clinton will celebrate again in Little Rock, joined by friends and campaign survivors from across the country.

The highlight of the Arkansas gathering will come Nov. 18, when the 42nd president and former Secretary of State Hillary Clinton are scheduled to deliver the 26th Kumpuris Lecture.

The event, which was announced by the Clinton School of Public Service on Thursday, is open to the public and will be held at 4:30 p.m. at the Statehouse Convention Center.

Tickets, while they last, can be obtained by email at kumpurislecture@clintonschool.uasys.edu or by calling (501) 683-5239.

The Clintons will be joined on stage by one of the architects of his victory -- political strategist James Carville.

The lecture falls on the 13th anniversary of the opening of the Clinton Presidential Center and will be a homecoming for many of those in attendance.

"We're thrilled to welcome guests back to Little Rock, back to the place where the work continues today at the Clinton Presidential Center," said Jordan Johnson, a spokesman for the Clinton Foundation.

The Clintons held a similar celebration in 2011, marking the 20th anniversary of the launch of his presidential campaign. It featured a pedestrian bridge dedication, a parade of Democratic dignitaries and a performance by the musical group Chicago.

Skip Rutherford, dean of the Clinton School, said he looks forward to having both Clintons share their memories.

"It's certainly the first program that I can recall at the Clinton School where there is a direct conversation with both Bill and Hillary Clinton, so that's going to be very special," he said.

"It's Secretary Clinton's first trip to Little Rock since the election, so ... I know there's going to be a lot of interest," he said. "I think it's going to be a historic day."

Rutherford said he doesn't know how much, if at all, the Clintons will discuss the 2016 presidential election and Democratic nominee Hillary Clinton's narrow loss to Republican nominee Donald Trump.

But they'll definitely reminisce about the election that catapulted them to the White House, he said.

Outside the Old Statehouse in downtown Little Rock that evening, thousands of people gathered to greet the new president-elect.

Video from the 1992 celebration will be replayed tonight at Georgetown University in what is being called an election night watch party. Viewing quarter-century-old television footage, they'll watch Clinton's electoral landslide slowly unfold.

On Sunday at Georgetown University, there will be a free barbecue dinner and a showing of The War Room, a 1993 documentary that chronicles the path from Little Rock to victory.

There will also be a panel featuring former campaign strategists Carville and Paul Begala; media adviser Mandy Grunwald; and deputy campaign manager Rodney Slater, an Arkansan who fought for Clinton and eventually served as transportation secretary.

On Monday, there will be a daylong symposium.

A third panel, focusing on leadership and public service, will include Hope native and former White House Chief of Staff Mack McLarty.

"Clinton 25: Georgetown Reflects on the Vision of Bill Clinton" will conclude Monday afternoon with a keynote speech by the former commander in chief.