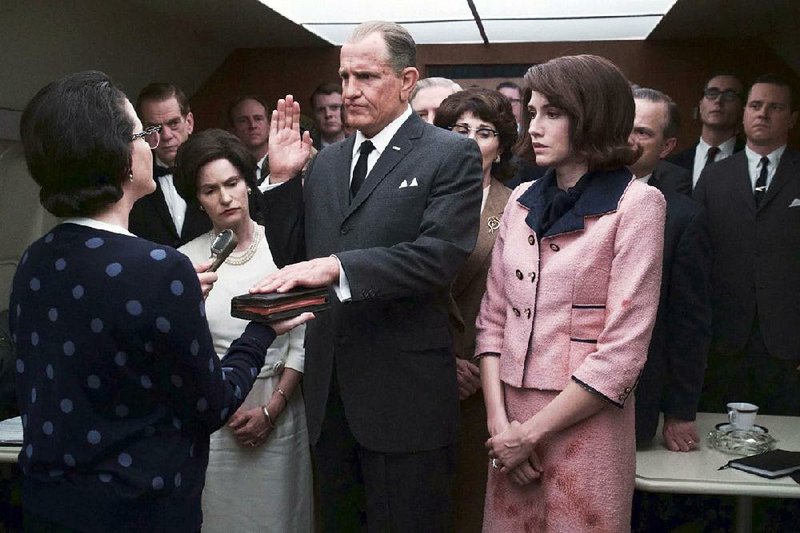 John F. Kennedy may have been the show horse with the vision, but Lyndon Baines Johnson was the work horse who put his game-changing ideas, notably the Civil Rights Act, into law, according to Rob Reiner's fascinating but, alas, conventionally staged LBJ. The interest is in the performances, and though Woody Harrelson looks painfully unlike the 36th president despite tons of makeup, facial prosthetics and a toupee, his exuberant, foul-mouthed portrait of the powerhouse politician is the film's main strength. Ribald and vivid, he paints Johnson as an idealist by conviction and a skilled behind-the-scenes manipulator out of necessity and inclination.

This is the second recent look at the president from Texas, after last year's HBO's movie All the Way, which put Johnson look-alike Bryan Cranston in the Oval Office. Comparisons are inevitable, especially since the two works have many points in common, not least their sympathetic portrait of a man who felt himself to be a deeply disliked president.

But the presidency of Johnson, which began on the tragic note of JFK's assassination in 1963 and ended with his discouraged decision not to run in the 1968 elections, is not the subject of LBJ. In fact, his crowning achievement, the domestic program against poverty known as the Great Society which included Medicare, Medicaid and Head Start, as well as his widely decried escalation of the Vietnam War, are barely mentioned before the end titles.

Instead, Joey Hartstone's screenplay zeroes in on his difficult years as JFK's vice president, high-contrasting their ambitions, styles and personalities. Given the perennial appeal of anything Kennedy, it's a rewarding springboard to leap from, and distinguishes the film from other shots at bringing these larger-than-life figures to the screen. One only wishes it wasn't dramatized so literally. The slow-moving Dallas motorcade, that turning point in history, interrupts the narrative time and again to remind us that Kennedy is approaching his destiny, and Johnson his. This obvious framing device, coupled with throw-away choices like a dull music track that deadens the images, cast a telefilm pall where some edgy innovation would have been most appreciated.

Alert to Bobby Kennedy fans: Along with Johnson's rehabilitation as a straight-shooting, get-it-done man with a mission, and JFK's positive holding pattern, comes a serious takedown of RFK, who is given almost shocking viciousness and immaturity by actor Michael Stahl-David, echoing the opinion set forth in Raoul Peck's documentary I Am Not Your Negro. And he's not the only victim. Scrutinized through Johnson's disenchanted eyes, a host of other names out of history flit across the radar screen, including powerful senators Richard Russell (Richard Jenkins) and Ralph Yarborough (Bill Pullman) and his cagey, liberal VP Hubert Humphrey (a convincingly downtrodden Doug McKeon).

As the story opens, LBJ is the Senate majority leader and a very powerful man. He knows every congressman inside out and has what it takes to reach his political objectives: "endless compromise." Vehemently opposed to racial segregation like the Northern Dems, he's their linchpin with the conservative Southern caucus, the former Dixiecrats from the Deep South, who see him as one of their own. His fluency in both languages is why John Kennedy (Jeffrey Donovan) selects him as his running mate over the prissy objections of his brother Bobby and his clique.

Donovan's Jack Kennedy has a familiar calm, hypnotic presence and a knockout Boston drawl that puts at least four vowels in the word "good." He measures his speech and makes up his own mind, however, even if it means going against members of his family, who obviously have a lot of input in running the country. But as Lady Bird (a superbly cast Jennifer Jason Leigh) reminds her husband, Kennedy is a man of great ideas and he earns the viewer's respect, though his relations with the outspoken Johnson are formal at best.

After helping his party win the election by a controversial squeak, Johnson finds himself isolated from decision-making by the "Harvard boys." He's allowed no scope to empower the vice president's role as he intended, and it dawns on him that RFK is being positioned to follow in his brother's footsteps, while he is politically defanged. It's sad to see him on the defensive, stripped of his barbed wit and sarcasm. All he can do is vent his frustration to his wise and strong wife in several perfectly calibrated scenes that humanize the couple without sentimentalizing them.

Harrelson is consistently entertaining in his colorful judgments and obscene analogies, delivered in his mighty native Texas accent. He and Reiner push non-P.C. freedom of speech a lot further than All the Way in strikingly similar scenes. Consider the hilarious tailor scene, in which Johnson is being fitted for pants while he shoots off orders to his aides, at the same time smoothly instructing the man with the pins to give him more crotch room.

The other notable moment has him seated on the throne with the bathroom door flung wide open, haranguing his embarrassed inner circle while he unself-consciously uses the toilet paper. His outer flamboyance corresponds to inner insecurity about his popularity with the public: "Why don't they like me?" he wonders to Lady Bird. This is the man who said, "Politics isn't like war, it is war" and "You can't use nice in a knife fight."

By the time the motorcade reaches its date with destiny, LBJ has reached a political nadir. Then, abruptly, Kennedy is dead and Johnson is sworn in on Air Force One beside Jackie and catapulted into the White House. He is shocked by events but ready to lead the nation. Disgusted and angry, Bobby Kennedy and many of John's circle seem determined to sabotage his presidency. How Johnson emerges from this difficult moment, using all his political savvy and unshakable will, makes engrossing political drama. It culminates in his stirring speech before the joint session of Congress, hammered out in a few days by Kennedy's gifted but reluctant speechwriter Ted Sorensen, in which he promises to implement the dead leader's "unfinished business" and embrace his legacy on civil rights and justice for the poor.

The last scenes spiral around his battle to get the Civil Rights Act through Congress and heal the rift with Richard Russell, whose power the Kennedys never seem to understand. Russell's satisfaction at America having its first Southern president in 100 years turns to chagrin when he learns his pupil intends to pursue desegregation in the South. In their final showdown during one of Lady Bird's down-home dinners, LBJ courageously calls his mentor a racist and wins a laudable moral victory. It's one of the more satisfying moments in a film more daring in its ideas than its direction.