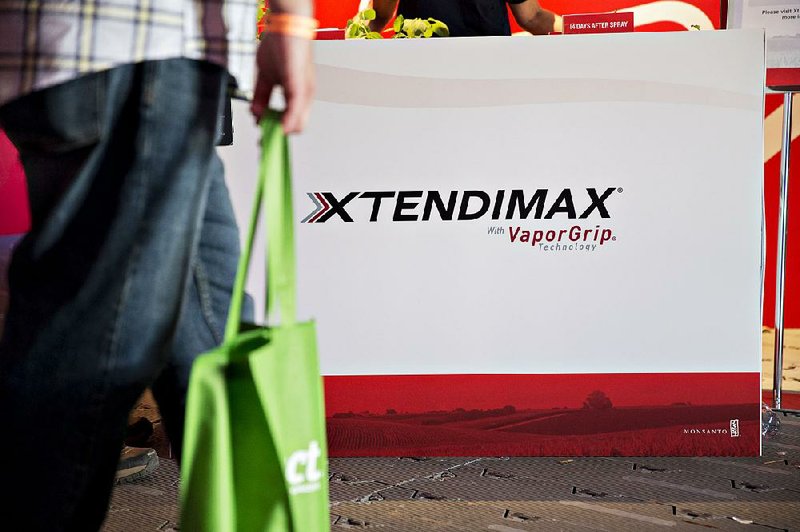 A sign for Monsanto’s Xtendimax herbicide, developed to kill weeds that have grown resistant to glyphosate herbicides, hangs at a Monsanto booth at the Farm Progress Show in Decatur, Ill., in August.

Monsanto has asked that a member of the state Plant Board be disqualified from participating next week in a public hearing that will decide how or whether farmers can use the dicamba herbicide in 2018.

The seed and chemical company, based in St. Louis, said in a letter this week to the Plant Board that Terry Fuller of Poplar Grove, in Phillips County, is biased and helped round up public support for the board's recommendation that dicamba spraying be prohibited next year between April 16 and Oct. 31.

Fuller, who represents the Arkansas Seed Growers Association on the board, on Thursday acknowledged soliciting support for the cutoff date.

"I see that as part of doing my job," Fuller said. "I represent seed growers. We've had 17 meetings in 2017 on dicamba, and we've had several votes to restrict spraying in some way."

Scott Partridge, a Monsanto vice president, said Fuller's emails and his forwarding of form letters show that Fuller "has prejudged the facts."

"Even more troubling, Mr. Fuller is actively engaged in attempting to tip the public comments in favor of his selected position," Partridge wrote. "His actions may have already introduced bias into the administrative record and irreparably compromised what is required to be a fair and just public process."

The Plant Board will vote on its recommendations at the conclusion of a public hearing that begins at 9 a.m. Wednesday at the Embassy Suites hotel in Little Rock. The board received more than 25,000 comments during a 30-day public comment period that ended Monday.

Partridge's letter is the company's latest move in an effort to get its new dicamba herbicide, called Xtendimax, into the Arkansas market. In September, Monsanto criticized weed scientists with the University of Arkansas System Division of Agriculture, a weed consultant, the Plant Board and a task force on dicamba for taking positions opposite of Monsanto's.

In October, Monsanto sued the board, a division of the Arkansas Agriculture Department, in Pulaski County Circuit Court, alleging that it has violated state law in how it has reached various decisions regarding dicamba in the past year.

But Fuller's email effort appears to be similar to one this summer by Jammy Turner, a 15-year Monsanto sales representative who was appointed to the board by Gov. Asa Hutchinson in 2015 to represent farmers. By mid-June, the Plant Board had received more than 200 complaints of dicamba damage, and its pesticide committee had voted unanimously to cut off further spraying during the summer.

"The ... committee has voted to pull dicamba and it is going to the full board next week," Turner wrote in a June 20 text message to at least one farmer. "Just curious about how you feel about the technology and I think we really need some support from the grower level to keep this technology and keep the option for you as a grower."

Turner also encouraged the farmer to collect comments from colleagues and wrote that he would be "happy to compile the responses and present them" to the board.

Charla Marie Lord, a Monsanto spokesman, said the text "appears to be a message from the farmer representative asking for discussion, dialogue and input from farmers."

Turner, who recused from voting on issues related to Monsanto's dicamba but participated in discussions before the votes, resigned from the Plant Board on Sept. 5 to take a position on another agriculture-related board with no regulatory power.

Lord said the company played no role in Turner's resignation from the Plant Board.

Fuller said he intends to continue his work, unless the board votes Wednesday to disqualify him.

"The board is designed to regulate all facets of agriculture," Fuller said. "There's not a way to have a completely impartial group, but we all try to be fair and open."

Fuller said weed scientists at universities in Arkansas and other states unanimously have determined that dicamba lifted off soybean plants this summer as a vapor and moved off target, damaging susceptible crops, fruits and vegetables, residential gardens and ornamentals miles away.

Monsanto disputes that the process, called volatility, was a major source of damage. Instead, the company says, farmers and applicators disregarded instructions on dicamba's use or used older, more-volatile dicamba formulations not allowed for spraying across the top of crops.

An April 16-Oct. 31 cutoff date essentially defeats the purpose of new dicambas produced by Monsanto, BASF and DuPont for use on soybeans genetically modified by Monsanto to be tolerant of the chemical. Monsanto developed the seed-and-dicamba technology as pigweed, marestail and waterhemp grew resistant to glyphosate, another weedkiller better known as Monsanto's Roundup.

The Plant Board received nearly 1,000 complaints of such damage this summer, prompting an emergency ban on dicamba spraying that took effect July 11 and spurring the restrictions now being considered. Farmers in Arkansas and other states have filed lawsuits against Monsanto and other dicamba manufacturers.

While only BASF's Engenia was labeled for in-crop use in Arkansas this year, Monsanto's dicamba-tolerant soybeans were planted on about half of the state's 3 million soybean acres. Monsanto has said it wants to have the beans on at least 55 million of the nation's 90 million acres of soybeans next year.

The public hearing Wednesday is in a hotel ballroom that seats about 500.

Adrian Barnes, a spokesman for the agriculture department, said the hearing could run into the evening or into a second day. "We won't cut anyone off from speaking," Barnes said.

Some of the 25,000 public comments began appearing Thursday afternoon on the department's website. Barnes said the staff will continue to sort through the comments, update the website as needed and report the final number of comments favoring and opposing the proposed new restrictions.

The Plant Board received 245 comments during a similar process a year ago, when it limited in-crop dicamba use this growing season to April 15-Sept. 15, a spraying season cut shorter by the July 11 ban.