No Zeke may vex Cowboys 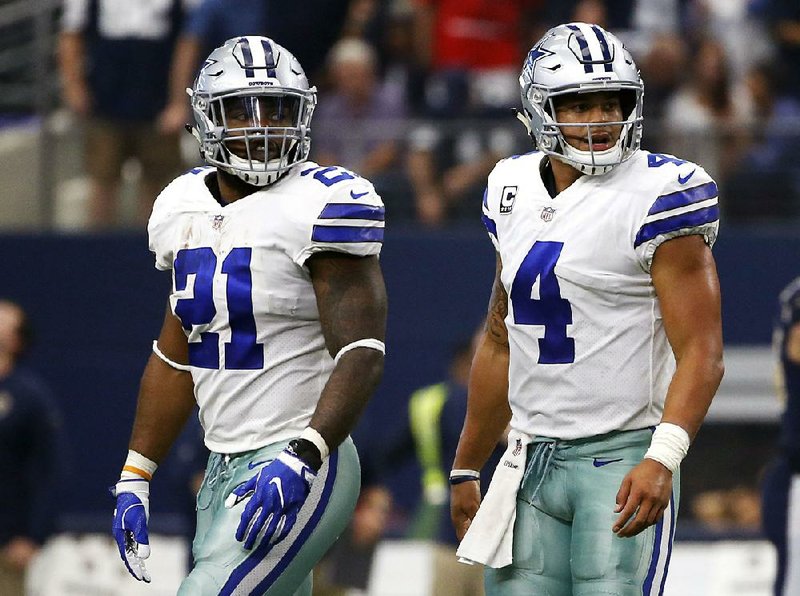 In this Oct. 1, 2017, file photo, Dallas Cowboys running back Ezekiel Elliott (21) and quarterback Dak Prescott (4) walk off the field after an unsuccessful two-point conversion in the second half of an NFL football game against the Los Angeles Rams in Arlington, Texas.

FRISCO, Texas -- Dak Prescott started one game without Ezekiel Elliott during a remarkable rookie season for the quarterback-running back duo of the Dallas Cowboys.

Last year's NFL Offensive Rookie of the Year played just two series in that meaningless regular-season finale at Philadelphia with the best record in the NFC already locked up. Elliott watched since there was virtually no chance of being overtaken for the NFL rushing lead.

Now Prescott is preparing for six games without Elliott, barring a late legal ruling that would again put his suspension over alleged domestic violence on hold.

And this time the Cowboys (4-3) trail the Eagles by 2½ games in the NFC East with a difficult schedule looming.

"It's about staying focused to my job," said Prescott, who has led the Cowboys to consecutive victories with a boost from Elliott's two highest rushing totals of the season. "My job was that when Zeke was here. My job is the same when Zeke is not here."

Kansas City (6-2), tied for the best record in the AFC, visits Sunday, followed by Dallas' trip to defending NFC champion Atlanta. And then? How about the first meeting with the Eagles, the first of three consecutive home games in 12 days for the Cowboys.

"It's going to be the story of a person's long career," offensive coordinator Scott Linehan said. "You're going to be playing games without players you've been playing with for a while. I just feel so good about Dak's mindset of who's in the game. He doesn't really get caught up in all that."

Prescott replaced an injured Tony Romo and had one of the best rookie seasons in NFL history with Elliott by his side, leading a franchise-record 11-game winning streak while setting an NFL rookie record for passer rating. Elliott broke the franchise rookie record with 1,631 yards rushing.

Things weren't nearly as smooth this season in the seven games before the suspension, with the Cowboys matching last season's loss total (three) and Prescott's interception total (four) in the first five games.

But the Cowboys were rounding into form, capped by Elliott's 150 yards rushing and two touchdowns on a rainy day in Washington. A day later, the fourth overall pick from last year's draft was suspended.

"There is no blinking," said Prescott, who has 14 touchdowns and a passer rating of 96.6, about eight points off last year's rookie record. "There is no questions asked. Nobody even worries about it. The next person comes in, does his job and we continue to move on."

Alfred Morris, a 1,600-yard rusher as a rookie in Washington five years ago, has been Elliott's backup and figures to get the first chance as a lead back, if the Cowboys decide to have one.

Former Arkansas Razorback Darren McFadden, Dallas' leading rusher two years ago despite limited duty the first six games, has been inactive all season and will get some sort of chance. Rod Smith, who forced his way onto the roster with an impressive training camp, might see time ahead of McFadden.

Jason Witten, the 15th-year tight end who embraced Prescott even though he supplanted his best friend in Romo, sees this simply as the next step in the former Mississippi State standout's development.

"The best thing Dak does, I feel like, is handle situations," Witten said. "He's done a really good job and will continue the transition of communicating with Alfred and Darren and Rod. Constantly communicating, just like he and Zeke do.

But it is significant that Prescott's guy isn't there.