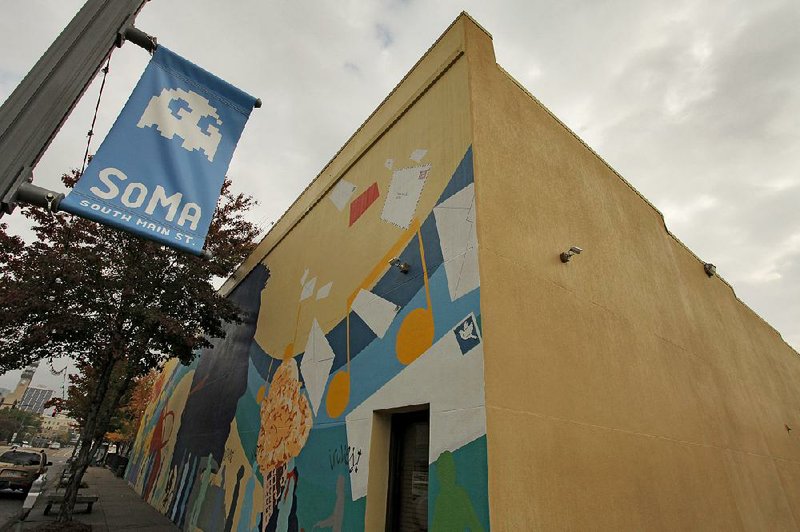 Rock Town Distillery plans to move from its east Little Rock location to the building at 1201 Main St., the former home of Jungkind Photographic.

A fixture in the East Village before it was called East Village is moving to another growing downtown Little Rock entertainment district — South Main.

Rock Town Distillery is shifting its production to the old Jungkind Photographic building at 12th and Main streets as soon as March, said Phil Brandon, who founded the distillery almost eight years ago.

“It’s all about needing more space and continuing to grow,” Brandon said.

The move, which requires approval from the Arkansas Alcoholic Beverage Control Board, is welcome news for the Southside Main Street project. It is affiliated with Main Street Arkansas and “uses historic preservation and rehabilitation as the core for identifying and developing the South Main Street area.”

Hillis Schild, a member of the group’s board, said the artisan craft distillery will mesh well with the local vibe the development wants to project.

Rock Town bills itself as the first legal distillery of any kind in Arkansas since Prohibition. Its spirits, which have won numerous international awards, are distilled from corn, wheat and rye grown within 125 miles of the distillery. The distillery also offers tours and tastings and is available for private events.

“We’re thrilled,” Schild said. “We stress locally owned and homegrown. This is a great fit.”

Brandon has been contemplating a move for some time. His distillery was the first of the new wave of businesses in what is now called the East Village. Rock Town was followed in 2014 by Lost Forty Brewing. Cromwell Architects Engineers is locating its new headquarters there.

The firm has teamed with Moses Tucker Real Estate to revitalize the area. Moses Tucker is already marketing the Rock Town site.

Brandon wanted to remain in east Little Rock. Last year, he filed an application with the state Alcoholic Beverage Control Board to move his distillery permit to a site a few blocks east of his Sixth Street location, but he said he soon realized he couldn’t afford to build the ground-up operation he wanted.

Then the Main Street site came available. For years, it housed Jungkind. More recently USA Image had an operation there.

“It is perfect for our needs and a great location,” Brandon said. “And it is a lot bigger than what we have now.”

The building, he added, is “in terrific shape. It’s not going to be a lot of work. March is when we’re trying to get in there.”

The addition of Rock Town is one of several changes in and around that block of Main Street.

Piano Kraft, a fixture in the South Main district since 2003, announced last week that it is going out of business. Core Brewing Co., a Spring-dale-based craft brewery, is opening its second public house in central Arkansas on that block. Its first is on Main Street in North Little Rock.

Meanwhile, foundation work has begun on a 35-unit apartment complex on the 1300 block of South Scott Street and across the street from the Villa Marre historic home.

The three-story, two-building development has been described as the single largest private residential development in the neighborhood’s history.

The addition of Rock Town, however, may come at a cost to the area. The colorful mural on the west wall of the old Jungkind property may go. Brandon wants to add some windows and will try to save it, according to Schild, but that isn’t a given.

“I will take no mural over an empty business,” Schild said.