Get your deer here!

Arkansas offers ample opportunities to load up on venison by Bryan Hendricks | November 5, 2017 at 1:51 a.m. 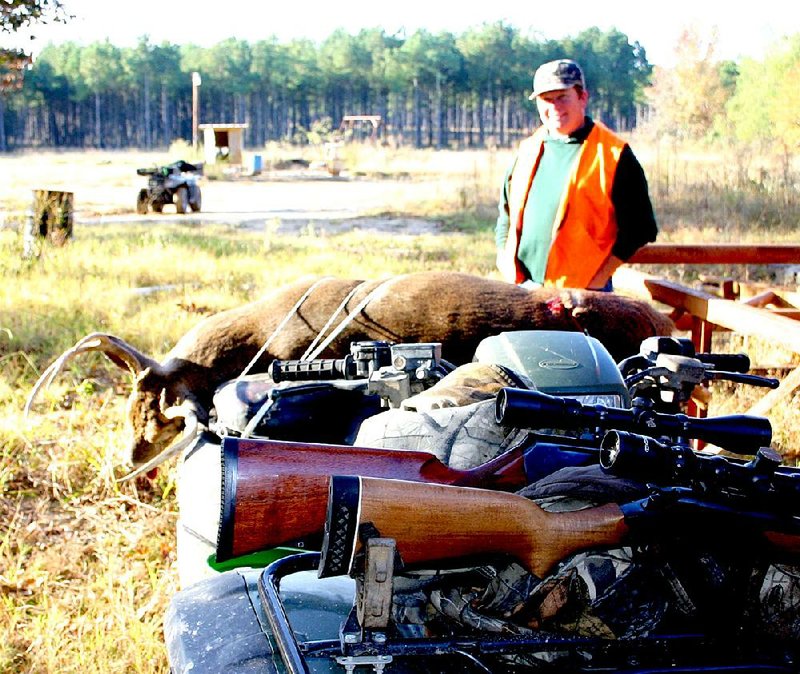 Almost 70 percent of Arkansas’ 313,000 licensed hunters killed a deer in 2016-2017, with a statistical average of 1.2 deer per hunter.That level of success makes the Natural State a deer hunting paradise.

With modern gun deer season approaching, many hunters are looking for the best places to hunt.

Some want to know how their county compares to others

Overall, Arkansas deer hunters are very efficient. Ralph Meeker, the deer program coordinator for the Arkansas Game and Fish Commission, said that nearly 70 percent of the state's 313,000 licensed hunters killed a deer during the 2016-17 deer seasons, and that each hunter killed a statistical average of 1.2 deer.

We certainly don't lack for opportunities. The Arkansas archery season runs from the last weekend in September to Feb. 28, the longest continuous deer season in the nation. We have two muzzleloader seasons that offer 12 days of exclusive opportunities for smokepole hunters in October and December.

Our modern gun seasons are generous, but if you live in south Arkansas, it runs uninterrupted for nearly 40 days. That doesn't include a five-day private lands modern gun hunt that took place in early October, nor does it include a three-day Christmas holiday modern gun hunt.

On top of that, we also have two modern gun deer hunts for youngsters in November and January.

Frankly, the AGFC was worried that the discovery of chronic wasting disease in our state in early 2016 would scare a lot of hunters away from the sport. That hasn't happened, Meeker said. Even in the chronic wasting disease "hot zone" of Newton County, deer hunters went about their business as usual. Most declined a free opportunity to have their deer sampled for CWD.

"That was kind of surprising to us," Meeker said. "Last deer season we set up 25 check stations to take CWD samples in the CWD zone in the first weekend of modern gun season. We expected to get several thousand samples, but we only received 535 samples. We were surprised that not more people were willing get a free CWD sample on that weekend."

Now, in Zones 1-2, the AGFC's strategy is radical herd reduction, with an emphasis on killing does and young bucks. The AGFC suspended the 3-point rule in Newton, Boone, Carroll, Madison, Marion, Pope and Searcy counties. The 3-point rule, enacted statewide in 1998, requires a legal buck to have at least three points on at least one antler. The AGFC also allowed hunters in zones 1-2 to check button bucks as antlerless deer. Button bucks count against your season limit of two bucks everywhere except in zones 1-2.

Curiously, hunters hunters only took advantage of the more liberal regulations on public land - the Ozark National Forest and Buffalo National River. They ignored them on private land, Meeker said.

"That was a real eye opener in that part of the world," Meeker said.

The most significant harvest decreases, Meeker said, were in eastern, southeast and south Arkansas.

Zone 12, a rural, heavily forested area of lowlands and river valleys, traditionally contributes the largest number of deer to our annual deer kill.

Meeker said that hunters killed slightly fewer bucks last year than in 2015-16, but the doe kill decreased significantly. That matters in terms of numbers, but it also reversed the recent trend of hunters killing more does than bucks.

Drought and a phenomenal mast crop might have contributed to the smaller tallies. Heavy rains in late fall often concentrate deer in higher elevations in low areas. We had an unusually dry fall last year, so deer remained dispersed.

"And, a lot of food plots failed because water wasn't available," Meeker said.

Lack of supplemental forage in food plots might not have mattered anyway because of all the acorns in the woods last year, Meeker added.

"We had a ton of acorns produced last year, and that reduced the amount of movements that deer had make to find food," Meeker said. "It also made attractants less effective. Corn wasn't as effective as it normally is."

Conversely, Arkansas experienced drought in late summer and early fall, but we experienced catastrophic, landscape-wide flooding in the spring. Meeker said that many fawns might have been killed in the flooding. That could depress deer populations temporarily and reduce the number of deer that hunters might see this season.

In terms of overall deer kill, a cluster of Zone 12 counties contributed the most deer to last year's tally. As usual, Union, Clark, Washington, Bradley and Drew counties produced the largest numbers. Union, Clark and Bradley counties are in the Gulf Coastal Plain. Drew County spans the Gulf Coastal Plain and the Delta, and Washington County is in the Ozarks. Its next-door neighbor, Benton County, was also in the top 10.

In terms of the number of deer killed per square mile, Bradley was our most productive county with 7.5, followed by Sharp County (7.2), Cleveland County (7.1) and Grant County (6.6). Hunters in Dallas and Pike counties killed 6.5 deer per square mile.

Overall, Arkansas hunters seem to be very happy with the state of deer hunting in our state, Meeker said, even with CWD. As mentioned earlier, we have a lot of deer and a lot of opportunities to hunt them.

"Hunters are managers' number one tool, and we don't want to lose the ability to manage deer through hunting," Meeker said. "The silver lining about the lack of CWD samples is that apparently people are not concerned. They're going to keep hunting." 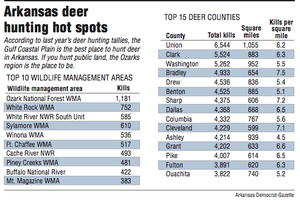 Print Headline: Get your deer here!