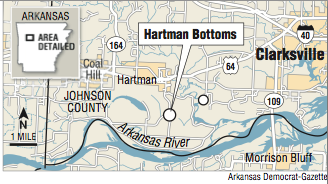 A map showing the location of Hartman Bottoms

JOHNSON COUNTY -- The owners of C&H Hog Farms and the international corporation that supplies the operation's swine are planning to apply for a permit to operate another farm, this one in a flood-prone area just south of Hartman.

The proposal has angered nearby farmers and some residents of Hartman and other parts of Johnson County who are concerned about possible flooding and odor from such a farm.

JBS, the Brazilian company that is proposing the hog farm, said the location is advantageous for the company because of its proximity to related facilities and that it should be safe from flooding.

JBS spokesman Cameron Bruett told the Arkansas Democrat-Gazette on Friday that the site of the farm "is not known to have flooded" since a levee was constructed to protect it from the Arkansas River, but others in the area -- including the Hartman mayor -- disputed that claim.

"JBS nor the farm owners desire to build a farm where flooding is likely," Bruett said in an email.

The Federal Emergency Management Agency's flood mapping system places the Hartman bottoms in a "flood hazard zone." Some of the bottoms are labeled in the mapping system as "1% Annual Chance Flood Hazard" and some are labeled as "Area with Reduced Risk Due to Levee."

A representative of JBS' live-pork division told attendees at a recent public meeting that the facility and its hog waste lagoons would be built up 4 feet to avoid floodwaters.

Still, Hartman Mayor Rita Griffin said she is concerned the flooding that is typical of the bottoms, and that occurred there this summer, could wash hog manure into nearby waterways, including Horsehead Creek and the Arkansas River.

"I can't see them putting that large of a hog farm on the Arkansas River," Griffin said. "I just can't visualize doing that to your waterways."

C&H Hog Farms, near Mount Judea in Newton County, already has drawn the ire of many concerned about the environmental risk its hog manure poses to the Buffalo National River, the nation's first national river.

That operation sits on Big Creek, about 6 miles from where the creek converges with the Buffalo. Environmental groups and others fear that manure from the farm -- the only federally classified large hog farm in the river's watershed -- could find its way into the Buffalo River and pollute the water, like what has happened in other states.

JBS officials and the farm's operators -- Jason Henson, Phillip Campbell and Richard Campbell -- have met with Griffin three times concerning their plans to apply for a permit for an operation near Hartman. They held a town-hall-style meeting Oct. 19 at the Johnson County Courthouse in Clarksville. The room was full, mostly with skeptics of the proposal.

JBS officials told the crowd that the farm would provide jobs in the community and produce food in a resource-strapped and increasingly populous and prosperous world. Officials answered questions from the audience about odor -- they said JBS hog farms don't get many complaints about odor -- and the potential for flooding, which they said shouldn't be a concern.

All but two people raised their hands when asked who opposed the hog farm as presented that night, including Jerry Masters, executive vice president of the Arkansas Pork Producers Association. Most people expressed a concern about the odor reaching Hartman.

Henson said the group would host another meeting. JBS and owners of C&H Hog Farms did not give an indication of when they would submit their permit application to the Department of Environmental Quality.

The farm near Hartman would start with 5,200 sows, which would then be bred to produce thousands of offspring to be housed on the site and then sent to other facilities in Arkansas and Oklahoma.

It would be a farrow-to-finish facility, meaning hogs would be raised to their ideal weight for slaughter and then sent off to a finishing site. It would employ 18-20 people, according to JBS. Company officials estimate $9.5 million in local economic impact in the construction of the farm and a $2.5 million annual economic impact once it is up and running.

But Griffin noted the importance of hunting and fishing near the bottoms and said she worries that odor from a hog farm and possible flooding that includes hog manure are a risk to those things.

The farm would be federally classified as a large concentrated animal-feeding operation and would not be a relocation of C&H, Henson, the co-owner of C&H, told the crowd at the recent meeting. Hartman bottoms are more than 60 miles southwest of Mount Judea, where Henson lives.

The land just south of Hartman is protected from the Arkansas River by a levee owned and operated by the U.S. Army Corps of Engineers. It has never been overtopped, said Miles Brown, a spokesman for the Corps.

Richard Plugge, a neighboring farmer, recalled flooding earlier this year that made its way onto the land of all four of the farmers in the bottoms. The National Weather Service confirmed that the area was under a flash-flood warning Aug. 15.

Plugge, 83, was born in the front bedroom of his family's house on Main Street in Hartman and has never lived anywhere else. He said he can recall floods going back to 1943.

Plugge grows corn and soybeans on land that neighbors where the proposed farm and hog manure would go, and he said he doesn't want floods to wash manure onto his fields.

Plugge applies 2 tons per acre of poultry litter to his 1,300 acres, most of which are in the bottoms, every other year. That's less than what the proposed hog farm would likely contribute to its 1,427 acres.

A large hog farm can generate millions of gallons of manure each year. In 2016, C&H -- which is smaller than the proposed farm in Hartman bottoms would be -- produced 2.5 million gallons, or about 9,300 tons, according to an annual report filed with the Department of Environmental Quality.

How much waste would be generated by the proposed hog farm or how the farm would compare in size with the 164 other permitted active hog farming operations across Arkansas is unclear.