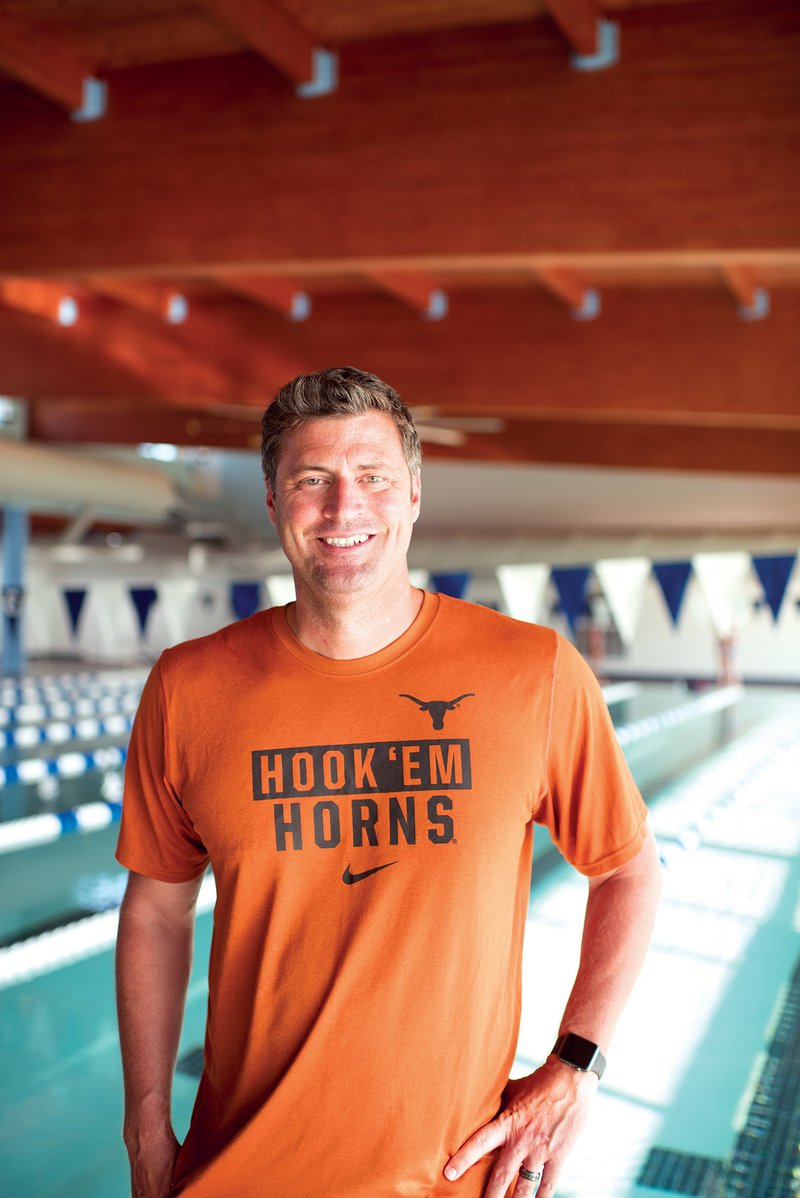 Chad Price is no stranger to the water. He has been a swim coach for 21 years, and 15 of those have been with the Searcy Sharks Swim Team.

As of Oct. 23, he is also director of the new Searcy Swim Center.

“I absolutely love it — coming in and watching everybody live a healthier lifestyle and have a fun time,” he said.

He said the center has been drawing crowds since it opened, and everyone seems to be having a blast so far.

A few of his responsibilities include keeping the building in order and making sure the water stays safe for patrons and that all equipment is running properly, he said.

Price said he has been a swimmer for most of his life and coached swim teams in Bentonville and Tampa, Florida, before coming to the Searcy Sharks Swim Team to coach.

“We have a great group of kids. We have some very dedicated kids and parents, and just have a good, fun team,” he said. “Everyone gets along; there’s no bickering or fighting. Our older athletes are great with our new athletes. We create a very positive environment that allows for a lot of learning and a lot of fun.”

The new swim center will be used as a practice space for the team, he said.

Price said watching swimmers achieve their goals and push themselves past what they thought possible is always a memorable experience.

“My favorite experiences always have to do more with practices than any of our competitions,” he said.

Price said he enjoys the small, tight-knit community of Searcy, where people are friendly and hardworking.

He said his wife, Brooke Price, is a technology facilitator for the North Little Rock School District.

“At the moment, she’s working on her Ph.D. Brooke’s a very intelligent, hard worker. She’s somebody who just loves life,” Chad Price said.

The couple have two children: Peyton, 13, and Garrett, 8.

Peyton is involved with both baseball and swimming, Price said.

“Peyton is a very serious person who loves athletics and is amazing at school. Garrett is the life of the party. Everybody loves him, and he can just turn the worst situation into a party,” Price said.

Boomer, a bulldog; and Harley, a Great Dane, are also members of the family, he said.

“I’m mainly interested in sports history. I was always a big Jackie Robinson fan,” he said. “Also, just socially through athletics, it’s interesting how we’ve changed as a nation. It’s always been athletics first, and our nation would follow.”

Price said he and his family enjoy camping and visiting Walt Disney World as often as possible.

He said they particularly enjoy taking their camper to Disney’s Fort Wilderness Resort and Campground in Orlando, Florida.

“Growing up, I lived in Orange County [California] for a while,” Price said. “Going to Disneyland with my family, then being able to go down to Disney World with my kids and wife — especially with our camper because we can sit, relax and enjoy — [means I can] get away from everything and watch the kids have a blast — not just my kids, but everybody.

“People are happy and having a good time. It’s nice just being able to see that instead of seeing people stressed over everyday issues.”

Price said his father was in the United States Army while Price was growing up, so the family lived in many different areas and traveled often.

Texas, California, Missouri, Kansas and even Germany are a few of the places he has lived, he said.

“I loved traveling around. As a kid, I didn’t appreciate it as much as I do now, but getting to see different cultures, even in our own country, and meet different people was something I was very fortunate to do,” he said.

Someone Price always admired was his swim coach, Leo Cancellare, who coached at Cathedral High School, and also for the El Paso Aqua Posse.

“He passed away 20 years ago. He was a great influence on me and showed that he always believed in his swimmers and had the same attitude I do now,” Price said. “He didn’t care if you were an Olympic gold medalist or not, just that you achieved your max potential.”

Becky McGuirt’s daughter, Erin McGuirt, has been on the Searcy Sharks Swim Team for nine years.

Becky McGuirt said she has known Price for that long, and he has certainly made an impact on his swimmers.

“Chad is a great coach and mentor, and my daughter thinks of him as her second father. She sees him about as often because she practices so much,” McGuirt said, laughing.

“He’s good with kids, and he’s got so many good qualities,” she said. “He’s one of the most trustworthy people I know. If he says he’ll do something, he’ll do it — he’s dedicated to what he does.”

McGuirt said it’s difficult for anyone to say anything negative about Price because he has so many good qualities.

He’s a strict coach when the team needs one but is also there when a teammate is in need, she said.

McGuirt said Price is very easy to understand and knows how to work with a variety of swimmers — from beginners all the way up to national-level swimmers.

He is very confident and dedicated to his team, she said.

“The kids don’t have a problem going to him and talking to him,” she said. “They respect him.”

McGuirt said if anyone deserves to direct the new swim center, it’s Price.

“He knows all of the ins and outs as far as Searcy goes,” she said. “He deserves it; he worked hard for this, and he’s wanted a swim center for years. It’s a dream come true for him, I guess. He’s worked so long and hard on it.”

Price said he is focused on becoming the best person and father he can be each day.

“We want to get the Searcy Sharks to where they’re consistently a national-level team,” he said. “I want to provide the best opportunities for the city of Searcy when it comes to anything dealing with aquatics.

“The best advice I’ve ever been given is not to chase money. Find something you actually like to do every day. Again, that was something my coach (Cancellare) taught me. Too many people wake up every day and dread getting up and going to work, but every day when I wake up, it’s something I look forward to.”