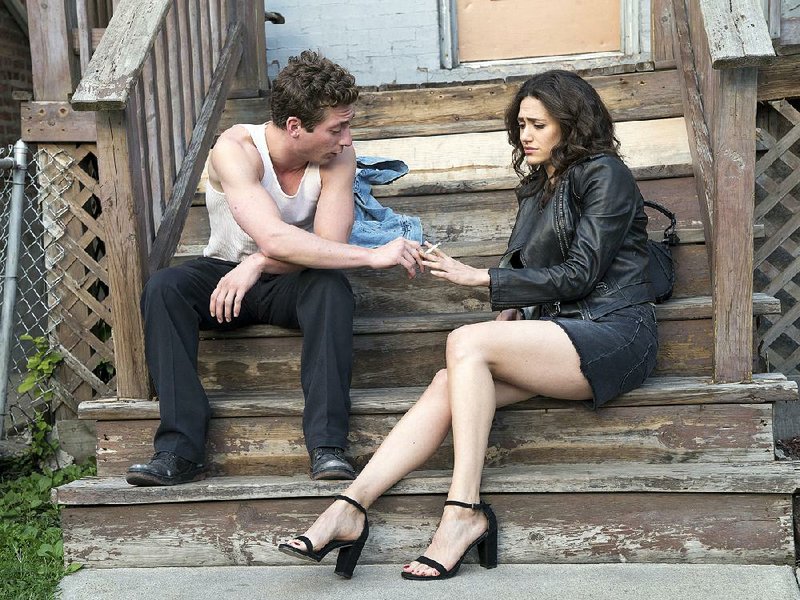 Shameless returns to Showtime tonight and stars Jeremy Allen White as Lip Gallagher and Emmy Rossum as his sister, Fiona.

Shameless returns to Showtime at 8 p.m. today. It's Season 8 for the engrossing adult comedy/drama.

By adult, I mean that because it's on a premium channel, the show contains nudity, coarse language, adult dialogue, alcohol and drug use and sexual situations.

Shameless treats the viewer like a grown-up, but none of the above is gratuitous. However, all or any of that may be a deal breaker for some viewers.

If you don't mind TV-MA programs, then this is an outstanding series for your consideration. I've seen every episode since it debuted on Jan. 9, 2011. I appreciate well-done adult TV and Shameless has never disappointed.

Yeah. Frank is a real piece of work.

Note: Liam is black, although both biological parents are white. Something about a recessive gene.

Fortunately for Frank, Fiona is a fierce surrogate mom to the siblings, and each kid is savvy and industrious in his own way. If it were not for Fiona, Frank would probably have died in some gutter long ago and the kids would have been carted off by human services.

But the kids are getting older, so where do we go from here?

Executive producer John Wells (ER, The West Wing) recently told Variety that in Season 8 the core of the show will still be family.

"When the kids were growing up," he said, "there were these moments of the family holding onto each other just for survival so they don't drown, but then they reach an age where they could take care of themselves and should take responsibility for themselves, so it becomes a question of how much do you separate?

"Uniquely in these kinds of families, the survival instinct to be together is really strong. They've survived together, and being in the foxhole bond is great."

Wells says to expect the series to deal with the fallout from the new presidential administration this season.

"We live in a world in which everybody is talking about what's happening," Wells says. "I have very liberal tendencies, but the one thing you can say about what is happening is it's started a conversation. There is a conversation in America about who we are, who we want to be and how we got so separate. Why are we not talking to each other? And we try and go right at it."

The Gallaghers buried their estranged mother, Monica (Cameron Monaghan), in last season's finale. That will loom large this season.

Frank will smoke the last of his meth, shave and move on with his life. Macy tells us Frank even gets a job and a car and tackles his brave new world.

Fiona will throw herself into the rental apartments she bought; Debbie is getting the hang of motherhood; and Lip will concentrate on getting sober.

• There's more! Wait. As long as we're on adult programming, Showtime is following Shameless with SMILF, a new half-hour comedy that it claims is "an honest take on motherhood, co-parenting, and female sexuality through a raw and unfiltered lens and the life of a 20-something single mom."

Anytime the words "raw" and "unfiltered" are used, that's code for TV-MA with all the attendant goodies. We have been warned.

The SMILF in the title is South Boston single mom Bridgette Bird, played by Frankie Shaw. The series is semi-autobiographical and Shaw not only stars in the show, she created it, writes it, and directs it.

The comedy comes from Bridgette attempting to balance her life as a working-class single mom and her desires for relationships and a career.

• Ray Donovan. Showtime has picked up the drama for a 12-episode sixth season. It stars Liev Schreiber and Jon Voight and will relocate to New York from Los Angeles.