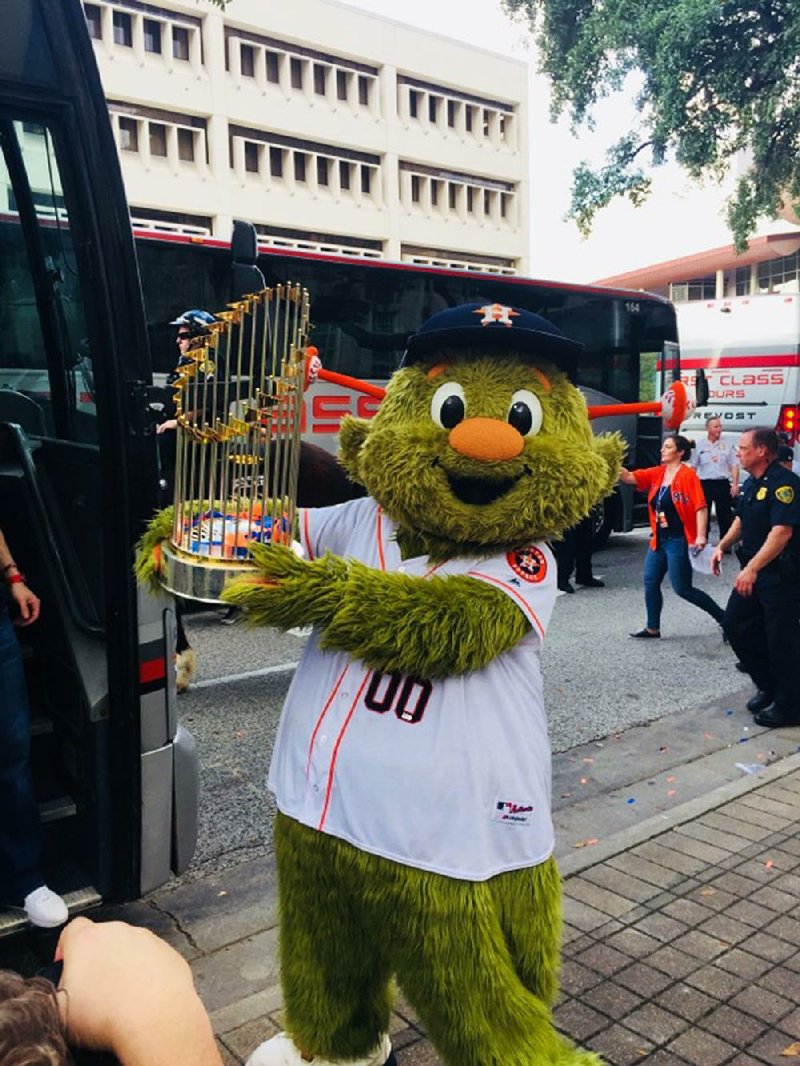 Kyle Hamsher, who graduated from North Pulaski High School in 2003, has performed as a sports mascot for high school, collegiate and professional teams, including as “Orbit” for the Houston Astros since 2013.

Kyle Hamsher, a 2003 graduate of North Pulaski High School, felt his body “literally breaking down” in the biggest game of his mascot career that began in high school.

The Astros led the Los Angeles Dodgers 12-9 in the top of the ninth, but two more score changes were about to make Orbit earn its alien mascot name.

Hamsher had just sprinted halfway around the ballpark in the hidden tunnels — Orbit’s antennaed baseball ears pinned back to its Astros cap, orange shoelaces flopping on white sneakers — so that he’d be ready to sprint into center field waving the victory flag if the Astros’ bullpen held the lead for the final three outs.

The Astros needed a rally, which meant Orbit needed to wave his “GET LOUDER” banner on the third-base line — all the way back on the other side of the field.

Hamsher dropped the flag pole, breathed an extra gasp of air, and made a mad sprint.

“Game 5 was the hardest I’ve ever worked in my career,” said Hamsher, 32. “Had we gone into any additional extra innings, I’m not sure I would have made it all the way.”

Hamsher ran back and forth twice more before Houston’s Alex Bregman hit a walk-off RBI single in the bottom of the 10th.

As Bregman was swarmed by his teammates, Orbit could be seen in the background on the television broadcast, hurtling toward center field with a giant Astros flag.

“It was the apex of anybody’s career to be on the largest stage imaginable,” Hamsher said.

Hamsher’s career began as “Flash the Falcon” at North Pulaski, which merged with Jacksonville in 2016.

A friend’s brother had been the Falcon, and Hamsher — who studied theater in high school and college — decided to give it a try.

He went on to work for the Arkansas Travelers as “Shelly the Horse;” the Arkansas Twisters as “Radar;” Arkansas State University as an Indian named “Red;” and the NHL’s Florida Panthers as “Stanley the Panther.”

Hamsher did not disclose his salary, but he said it is enough for a living.

“It’s a very unique art form to say the least,” said Hamsher, who was hired to be Orbit in 2013. “You have the power to entertain people. You have the power to make people laugh, make them cry, make them angry, all sorts of emotions, without [the mascot] saying a word or making a single facial expression. Because, obviously, the character’s facial expression is set. It’s either smiling or it’s not or something else.”

Hamsher said he has to exaggerate every motion, so spectators can notice from long distances. He studied cartoons, like Tom and Jerry, and picked up on detailed head and limb movements that convey specific emotions. He also created character profiles of his mascots, which helped him craft their personalities.

“Orbit was gone for 12 years,” Hamsher said. “If I were away for something [like] 12 years and came back, how happy would I be? Extremely happy. So that’s the approach I took: He’s incredibly happy to be there.”

The personality matched with the Astros, which had only been to one World Series in its previous 55 seasons.

Orbit’s interactions with opposing players resembles a carefree kid who has gained the courage to pull pranks. Once, the mascot mimicked stretching players in pregame warm-ups, and another time it sat in a fortune booth and handed Los Angeles Angels designated hitter Albert Pujols a card that read “YOU WILL GET A BUNT SINGLE.”

During the playoffs, Orbit could be seen behind home plate, giddily peeking over the backstop wall with other kids.

The Astros held their World Series parade in downtown Houston on Friday, and Hamsher said Orbit had his own truck.

He looked out at the hundreds of thousands of people packed into office buildings, parking garages and streets, many of them affected by Hurricane Harvey’s landfall in August.

He noticed a sign that read: “FROM UNDERWATER TO ON TOP OF THE WORLD.”

“That [parade] was when the moment hit me,” Hamsher said. “I thought it was going to be when I went in the back and smelled hot dogs and mustard and thought I was in Ray Winder Field. But seeing a million people there in the city, that was the moment.”