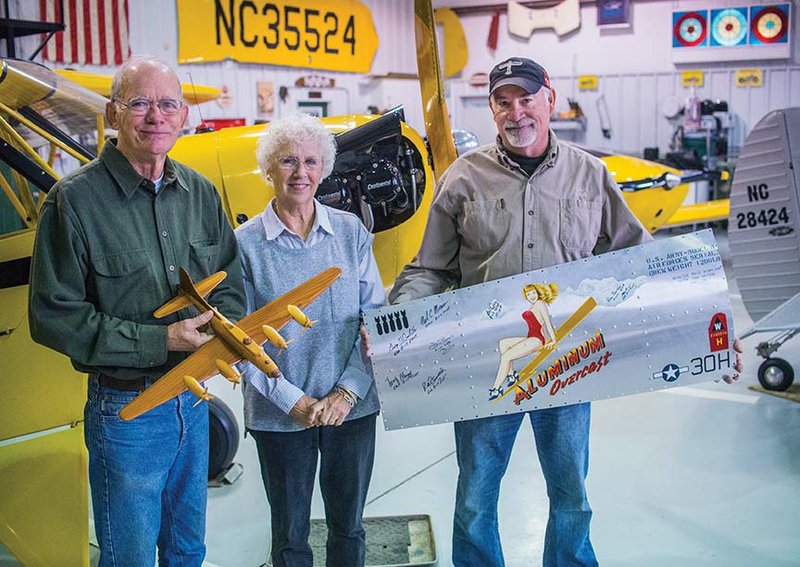 Planning the upcoming tour stop of the World War II B-17 bomber at Cantrell Field in Conway are Bobby and Ann Cantrell, from left, and Bill Hooten. Bobby Cantrell holds a model of the plane, while Hooten shows an actual nose-art panel from the plane, “Aluminum Overcast.” The Cantrells, both members of the Clinton chapter of the Experimental Aircraft Association, are co-hosts for the event, and Hooten is a mechanic with the EAA’s B-17 touring program.

CONWAY — A piece of military history will fly into Cantrell Field this week.

Arkansans are invited to “Join the Flight” as the Conway and Clinton chapters of the Experimental Aircraft Association host the World War II B-17 Bomber Tour stop at the Conway Municipal Airport at Cantrell Field on Friday through Nov. 12. Lunch will be available each day.

Catfish, will be available for purchase.

“The Conway Convention and Visitors Bureau is excited to partner with the EAA to bring ‘Join the Flight’ to Conway,” said Rachel Shaw, director of destination marketing for the Conway Convention and Visitors Bureau, Conway Area Chamber of Commerce. “They are hoping to make this an annual event, and the CVB is happy to partner with them and help make their event a success.

“We are working with the EAA to get the word out about the Veterans Day event and to help promote the B-17 flights and ground tours.”

Members of the University of Central Arkansas Reserve Officers’ Training Corps will present the colors at Saturday’s Veterans Day program. State Sen. Jason Rapert, R-Conway, will give the opening prayer and serve as master of ceremonies. Retired Brig. Gen. Travis D. “Dwight” Balch of Vilonia, former commander of the Arkansas Air National Guard, will be the guest speaker.

The UCA Dixieland Jazz Band, under the direction of Jackie Lamar, professor of saxophone, will provide patriotic marches and period music.

“We will play some period-appropriate music, as well as the national anthem,” Lamar said. “We will be performing ‘American Patrol March,’ which was the march Glenn Miller used with the Maxwell Field (Montgomery, Alabama) Army Air Corps Band to influence the military brass to let him start a military jazz band.

“My dad, Homer Brown, was in that band,” she said, adding that her father later directed the UCA Marching Band.

Veterans are asked to check in at the ticket booth after

arriving at the airport.

According to information found on the EAA website, B-17.org, the B-17, known as “The Flying Fortress,” is considered one of the greatest military airplanes ever built and one of the best-known aircraft types of the World War II era.

EAA’s Aluminum Overcast was built in 1945 but was delivered too late to see active service during World War II. The B-17 was donated to the EAA Aviation Foundation in 1981. After being displayed at the EAA AirVenture Museum in Oshkosh, Wisconsin, for 10 years, the airplane made its national tour debut in the spring of 1994.

are both pilots. They are neighbors in the Arkavalley Airpark, north of Conway.

Hooten has been a member of the B-17 flight crew for 14 years. Although he is not part of the crew bringing the B-17 to Conway, he will participate in media-day activities on Thursday and will fly with the plane when it leaves Conway en route to its next stop in Olive Branch, Mississippi.

Hooten also assists with passengers during flights. He said the Federal Aviation Administration requires that a crew chief be on board in case of emergencies. He is third in seniority among approximately 20 crew chiefs.

“I am the only one in Arkansas,” he said.

Hooten said that after he retired, he always wanted to volunteer at the EAA summer convention in Oshkosh.

“I did, and I met a gentleman who was involved in the B-17 touring program,” Hooten said, adding that he returned a few years later with his father, the late William Thorn Hooten Sr., who was an Army helicopter pilot in Vietnam, and met the man again. Hooten and his father had built a plane together and went to Oshkosh for educational purposes.

“He asked me if I would be interested in working as a mechanic on the B-17, knowing I was a certified mechanic. It took me less than a minute to say ‘yes,’” Hooten said, smiling.

“Flying in a B-17 is an experience you will never forget. It is an unforgettable time,” Hooten said.

“During the past 14 years, I have met hundreds of veterans and heard their stories. I cannot imagine flying that plane during wartime and having to make split-minute decisions. … It is unbelievable … being ankle-deep in bullets, being shot at while flying 30,000 feet above the ground in 30-below-zero degrees,” he said.

“I can’t stress enough what these veterans sacrificed for us,” Hooten said. “Many gave their lives, the ultimate sacrifice. We encourage World War II veterans to come and share their stories.

Bobby Cantrell said this B-17 tour stop is also an opportunity to promote the new airport and get people to visit it who might not otherwise do so.

“Plus, it is a chance to experience a bit of American history,” he said. “We are hoping this might turn into a yearly event at the airport.”

Ann Cantrell said EAA schedules the B-17 tours “every other year, but they have other planes that tour as well.”

Bobby Cantrell said he grew up around airplanes.

“Dad (the late Thomas Cantrell) was a pilot and a civil flight instructor at Grider Field in Pine Bluff,” Bobby said.

Cantrell Field was relocated in 2014, moving from its original site on Sixth Street in Conway to its current location, 3250 Sand Gap Road, after the new facility was completed. The airport is approximately 10 miles southwest of Conway in the Lollie Bottoms area near the Arkansas River.

“This tour is something new for our EAA chapter,” Bobby Cantrell said. “It’s a lot of responsibility to take this on. The opportunity came to us about a year ago. It takes a lot of people. It just all came together and so happened to coincide with Veterans Day. More and more people have become involved. We like that it is happening on Veterans Day.”

Proceeds from the B-17 ticket sales will support the Experimental Aircraft Association, a nonprofit organization dedicated to sharing “The Spirit of Aviation” with everyone. To purchase tickets in advance at a reduced rate, call (800) 359-6217 or visit the website B17.org. Tickets may also be purchased at the regular rate on-site at Cantrell Field.