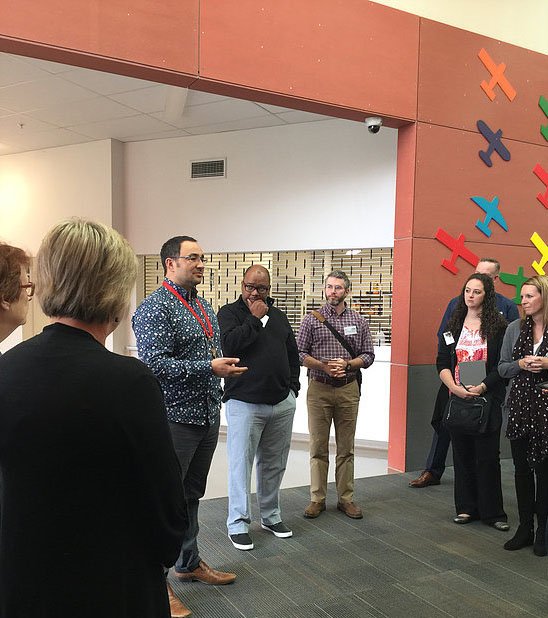 A recent trip to New Zealand gave some Northwest Arkansas educators a chance to observe how schools there approach teaching and learning, inspiring ideas for changes in their own schools. 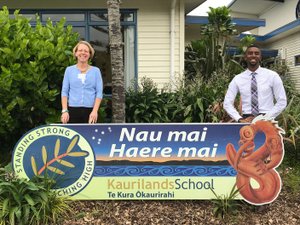 Photo by Photo provided by Muhammad Ramadan
Jennifer Marien and Muhammad Ramadan, teachers at the Thaden School in Bentonville, stand outside the Kaurilands School in Auckland, New Zealand, last month. They were part of a group of mostly teachers and school administrators that traveled to New Zealand to tour schools and learn more about the country’s educational system.

The group of 36, mostly teachers and administrators representing one private school, one charter school and five school districts in Benton and Washington counties, spent the last full week of October touring schools in and around Auckland, New Zealand.

Fun fact: “Kiwi” is the nickname for a person from New Zealand. It comes from the name of a flightless bird native to the country.

The knowledge gained was well worth the time and money spent traveling halfway around the world, said Megan Slocum, associate superintendent of curriculum and instruction for the Springdale School District.

"You can read about things and see it on the Internet, but being there in person and being able to talk with students and teachers and pick the brains of administrators there is a unique experience," Slocum said.

The trip was arranged through a partnership between the Office of Innovation for Education at the University of Arkansas, Fayetteville, and the Walton Family Foundation.

New Zealand is widely regarded as having one of the top education systems in the world. The trip was part of a two-year project meant to spur educational innovation in Northwest Arkansas, according to Kim Davis, a senior education program officer for the foundation's Home Region Program.

The foundation is providing $350,000 for the project, Davis said.

The Bentonville, Fayetteville, Rogers, Siloam Springs and Springdale school districts as well as Haas Hall Academy and the Thaden School sent teachers and administrators on the trip. Employees of the foundation, the Office of Innovation and the Arkansas Department of Education participated as well.

Core Education, a professional learning and development organization in New Zealand, facilitated the group's tours of seven public schools over five days. The group spent a few hours in each school.

Kimber Jungles, a math interventionist at Bentonville's Barker Middle School, jumped at the chance to go when Barker Principal Eric Hipp asked this summer for a staff member to join him. It was an opportunity few people ever get, she said.

"We got to sit down at a table with the teachers and talk to them," Jungles said. "We got to talk to principals, we got to talk to students. One principal opened the door, and said, 'Here's the school, you have an hour, go do whatever you want to do and come back.' We were able to really get in there and see what we wanted to see and ask questions we wanted to ask."

Hipp said the New Zealand schools focused on the process of learning and inquiry-based learning, an instructional model where students learn by coming up with questions they answer on their own through research and investigation.

The Northwest Arkansas educators came away impressed by New Zealanders' deep commitment to making children responsible for their own learning.

Stacy Smith, director of curriculum and instruction at the Arkansas Department of Education, expressed amazement at seeing young children engaged in various activities in school without adult supervision.

At one school, Smith encountered some first-graders doing woodworking. They were wearing their safety goggles and using hammers and saws. No adults were in sight, she said.

Those students were doing what they were supposed to be doing. They had earned their teachers' trust and been taught how to manage themselves, Smith said.

Not everything she saw in New Zealand schools was better than in U.S. schools, Smith said.

"But there were some core principles I saw that I had to honestly say, they do it better."

There are no school districts in New Zealand. Each school is autonomous and run by its own board. Principals oversee everything from curriculum to facility issues.

Denise Airola, director of the Office of Innovation for Education, said the New Zealand schools foster in their students great respect for diversity and the different cultures their students represent. People of European descent make up the majority of the population, but there are also significant numbers of Asians, Pacific islanders and Maori, the country's indigenous people.

"These kids are being taught that their cultural heritage is important and unique," Airola said.

Slocum recalled a very welcoming feeling in all of the schools they visited. Springdale does things to make other cultures feel welcome in its schools, but there is more the schools can do, she said.

Slocum also noted how even young students in New Zealand are encouraged to decide how they learn best. Students' interest level in learning was high because they had ownership of their learning, she said.

"We have been moving toward that, but seeing someone do it who has had it in place for the last 20 years is really exciting," she said. "It is a process. It doesn't happen overnight. Change can be scary, so I think [the trip] gave us the opportunity to be reassured the path we're on in terms of personalization of learning is right, and it's a better outcome for students."

Several who went commented on how the schools featured large rooms with more students and more teachers per room. Students weren't confined to one room, either.

At one primary school, you could stand in one place and see kids playing music, kids studying math and kids working on a science project, Slocum said. The environment reminded her of Springdale's Tyson School of Innovation, a technology-rich STEM -- science, technology, engineering and mathematics -- school designed for students to self-direct their learning, be creative and work with their peers.

Everyone who went to New Zealand will be asked to reconvene Dec. 20 to discuss what they learned and identify major themes they noticed. The aim is to help them design the next steps, Airola said.

Jungles likes that it's a two-year project.

"So it's not something where we're going to come back and implement everything next week. We have a lot of time to think and process. We have a long time to internalize and grow," Jungles said.

Hipp enjoyed the camaraderie of working with other educators from across the region.

"Everybody wants to be No. 1," Hipp said. "But it was important for me that Haas Hall is learning something that's going to help their kids. And Thaden's going to learn something that helps them. To have private, charter and public [schools] all together working -- not for a leg up, but for kids -- that is what I will remember."