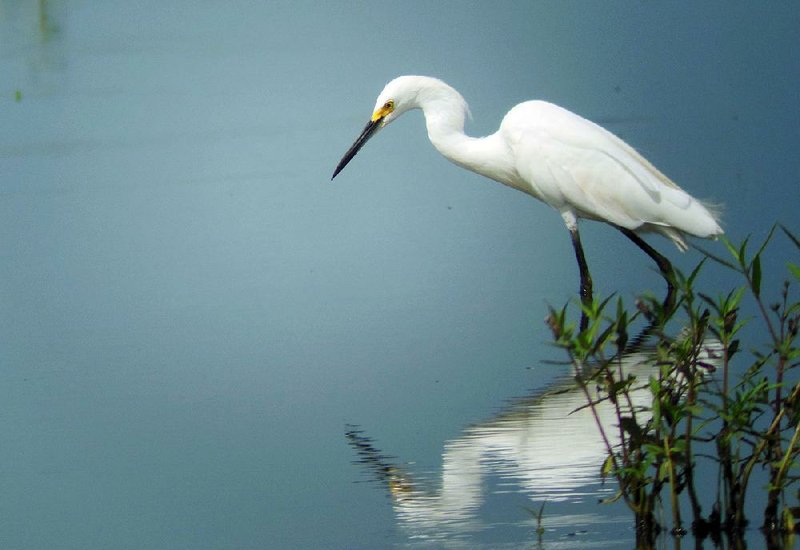 CRAWFORD COUNTY -- The general public wasn't cheering and jumping for joy, but hunters and birdwatchers were pretty excited in July when the Arkansas Game and Fish Commission announced it had acquired land to expand Frog Bayou Wildlife Management Area.

A wetlands restoration project less than 5 miles east and south of Alma in Crawford County, the area is easily accessed and has become very popular with waterfowl hunters, ground game hunters and wildlife watchers.

It's the only duck habitat on public land in Northwest Arkansas, and so it draws visitors from around the region. Brian Infield, assistant regional supervisor of wildlife management for the commission, has spotted as many as 29 vehicles in the parking areas on opening day of duck season.

The new acquisition includes separate parcels totaling 1,390 acres of bottomland along the Arkansas River. Parts of it are adjacent to the original 812-acre Wildlife Management Area and will connect its gaps.

Luke Naylor, Game and Fish Commission waterfowl program coordinator, said the commission will begin working on the restoration design this fall and will be doing some dirt moving by the end of next summer. If topographical surveys prove the land suitable, the commission would like to create more than 1,000 additional acres of wetlands and include a mix of different waterfowl hunting habitats.

Aware of the area's popularity with the wildlife viewing community, too, the commission will include watchable wildlife trails and viewing towers.

Naylor expects most of the changes will be made in the next two to three years. The new sections will open for hunting as each is completed.

"The important issue is that the acquisition has been completed," Naylor adds. "It is open for public use."

Since I am a part of the public Naylor was referring to, I decided to check out "my" new property in person. Infield agreed to let me accompany him as he made rounds of the newly acquired lands.

Infield graduated from Arkansas Tech University with a degree in fisheries and wildlife management. He proved a knowledgeable guide. Shortly into our tour he stopped to start up one of three diesel pumps currently used to flood the bottomland with water from Dyer Bay at a rate of 2,000 gallons per minute.

He indicated our location on his map and showed how 800 acres of the new acquisition will double the area's continuous wetland, making it even more inviting to migrating waterfowl.

As water bubbled up from the ground as would a busted water line -- confirming the pump was doing its job -- we resumed the tour. Infield explained that part of the appeal for duck hunters is this walk-in area does not require a boat or a retriever dog, just a sack of decoys and a pair of hip waders.

Hunting in the management area requires more walking than often associated with duck hunting; but Infield said hunters are resourceful: He has seen them transporting their gear on bicycles fitted with racks and carts.

The bicycles can navigate some of the roads that lead into the fields but are blocked to motorized vehicles. Infield said that even with the acquisition of new land, these maintenance roads aren't likely to be opened. The more roads Game and Fish has to maintain, the greater the expense. He would rather see taxpayers' money used to develop more habitat rather than more roads.

However, the commission does plan to add more parking lots to the current four.

We ended our tour parked on an elevated spot off Blackland Road. Infield pointed across the open bottoms and said that he would like to see an observation tower built there to provide an unobstructed view across the area.

The most exciting part of the acquisition Infield sees is the additional shallow-water habitat. The original area was small, fewer than 300 acres of wetland. It wasn't large enough to accommodate all duck hunters eager to use it.

After hearing the Game and Fish experts explain that a large part of the Frog Bayou area's users were of the "catch and release" variety, as in catching wildlife with a camera, I talked to birders.

Also, Neal's family traveled up the Arkansas River on keel boats some 200 years ago to settle along Frog Bayou Creek.

We met on the banks of Dyer Bay, an Arkansas River inlet that borders the area. As we stood there shaking hands and introducing ourselves, Neal had already identified a double-crested cormorant and a great blue heron across the bay.

He suggested that we use his Subaru for our tour because the equipment stored inside might come in handy. We drove a short distance before he stopped, hefted a tripod-mounted Swarovski spotting scope upon his shoulder, and we began walking a maintenance road bordering a wet area.

"There goes a swamp sparrow!" he exclaimed, pointing at what to me was a featureless blip flying over the path. It dove into tall grass and vanished.

How was he able to identify birds that I was doing good even to see? He explained that after birding as long as he has, you learn to identify them by characteristics such as size and behavior.

"Also," he added, "this area is my patch." Meaning he visits regularly and has accumulated notes on what birds live where and when. Before any outing, he explained, he reviews his notes.

As we continued strolling along the overgrown roadway, and Neal continued to name birds in the tall cattail blades or calling in the distance, he discussed the expansion.

"The important thing is they have completed the purchase," he said. It will take money to do the excavation needed to develop the shallow-water environments the Game and Fish Commission has planned. But Neal wasn't worried. It might take a while, but funding will come, he said. The land now belongs to the public, and we can begin enjoying it while the commission is raising money.

The birding community is indeed very excited about the expansion, he assured me. When the commission does flood the newly acquired land, it will create permanent wetlands and that will encourage moist vegetation to grow year-round. A lot of birds, game and nongame, thrive in that environment. A whole ecosystem will develop.

Enlarged, the Wildlife Management Area also will attract even more wildlife watchers, and not only birders. Neal has a friend who visits the area to watch dragonflies. And there are others who come to see southern leopard frogs.

YEARS IN THE MAKING

Game and Fish had been interested in the new land for years.

Infield explained how the original acres were acquired. In 2003, an excited David Wilson, game officer of the commission's Crawford County office, came into his office talking about property for sale in Dyer bottoms -- land he said they needed to buy.

Infield and the commission's regional supervisor at that time made some inquiries and decided the 812 acres of river bottomland did indeed have great potential as a duck habitat. Infield passed the information to the Game and Fish offices in Little Rock, suggesting it would be a good acquisition because there was no waterfowl habitat that far west in the Arkansas River Valley.

In 2005, partnering with Ducks Unlimited and the U.S. Natural Resources Conservation Service, the commission bought the land through a conservation easement. Frog Bayou Wildlife Management Area was established.

Naylor, the waterfowl program coordinator, said that the public use of the land proved so enthusiastic that expanding soon became a high priority. But the different tracts had different owners, so lining up deals for adjoining land proved to be a complicated process.

Recently, a single owner bought up the land, intending to farm. When that farmer ran into problems with drainage, the Game and Fish Commission, as the owner of the adjoining land, began working to find a resolution. While meeting with the landowner to discuss their options, Naylor suggested selling the land to the commission as one of the options.

The owner expressed interest. Next, Naylor talked to Stacey Shankle, senior project manager of the Trust for Public Land.

Trust for Public Land is a nationwide nonprofit conservation group whose mission is conserving land for people and getting them connected to the land. Shankle said a Frog Bayou expansion fit that mission perfectly.

"The public drives what we work on," he said.

Trust for Public Land acquired the properties and then conveyed them to Game and Fish. The purchase price was $4.54 million, 75 percent of which was brought in through Federal Aid in Wildlife Restoration funds. These funds are derived from a federal excise tax on sporting arms, ammunition, archery equipment and handguns.

"This is exactly how funds from the program were designed to be used," Naylor said. "The people who use the resource contributed to the acquisition." 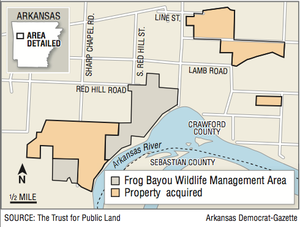 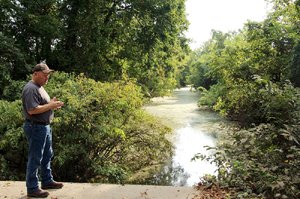 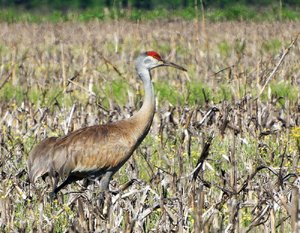 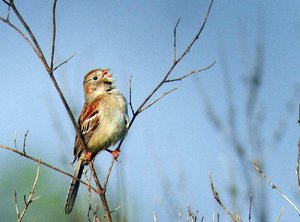 Photo by Special to the Democrat-Gazette/JOE NEAL
A field sparrow announces itself to the whole Frog Bayou Wildlife Management Area — also home to many swamp and song sparrows. 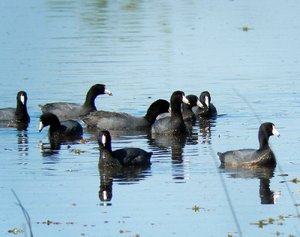 Photo by Special to the Democrat-Gazette/JOE NEAL
American coots are just some of the waterfowl that frequent Frog Bayou Wildlife Management Area.

Print Headline: This land is your land